Eric Dongmo is not, of course, a member of UCOMAS. He is, however, an integral part of the union and indispensable to its success. As a co-manager of the AMA Women Project, Eric has been involved with l’Union des Commerçantes du Marché Sandaga since its inception and is as committed to its future as any one member of the executive bureau. 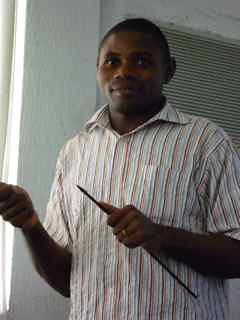 From the first day, stepping off the airplane and being greeted by a big sign with our names splashed across it, Eric, and his big smile, has been a constant presence in my and Johanna’s lives in Douala. He is always first at the market, working all day everyday with the women traders, helping get UCOMAS off the ground. As the primary contact between the director of the AMA Project Mme Kah Walla and the women of UCOMAS, Eric is not only aware, but also sincerely dedicated to every aspect of the association’s goals. He has been the primary resource for all UCOMAS trainings, has spearheaded each project (both enacted and planned) and has guided UCOMAS’ growth from the very beginning. But even more impressive than Eric’s devotion to his work is his genuine interest in promoting this cause and empowering the women in Sandaga.

Over the past five weeks it has become very clear that Eric is not just a strong supporter and facilitator of UCOMAS, but is in fact the CORNERSTONE of its stability. As I mentioned in a previous post, the creation of UCOMAS was a pragmatic decision. Academic theory aside, it was understood that better treatment of women, who are large contributors to the Cameroonian economy, would only serve to benefit society as a whole. Although he is a man and not a trader in the Sandaga Market, Eric fully appreciates the worth of investing in women and ensuring equal access to opportunity. 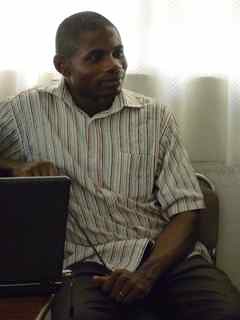 I don’t want to give the impression that Eric is an extremist, constantly ranting or rambling about the issues. To the contrary, he is a very clam and collected individual who is just very aware. It’s incredible to see the relationships he’s developed with the women of UCOMAS and, while asking for nothing in return, he continues to work tirelessly for a better future for all.