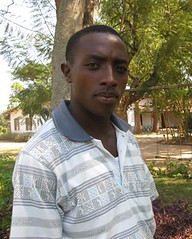 is at first disconcerting. He was in the FNL, the last rebel group to join the peace process and the most aggressively pro-Hutu, for eight years, rising to the rank of Commander. He was studying for his first candidature when he joined the rebels, something he admits was a free choice, resulting from a gradual and considered decision, because he was tired of being “menacé*” and discriminated against by the government.

Eric is strongly critical of the reintegration of the army, saying that although there were 21,000 members of the FNL, only 3,500 were integrated into the national army – and only 5,000 have been through official demobilisation processes, meaning that there are another 12,500 running around with guns and no means of making money. Not a comforting thought; Eric confirms that many of them have become bandits. He also tells me that relations in the newly-integrated army are poor, with soldiers who were former members of the other factions accusing him of not working, and is resentful of his loss in status from Commander to Sergeant-Major. Eric also displays the heightened masculinity common among soldiers; he seems almost boastful when talking about his past, and when Eric (Niragira, director of CEDAC) asks us to pose for a photo, he tries to feel me up. Considering his rebel past and army present, I decide against punching him in the face.

At this point in the interview, I was not optimistic. However, when we began to talk about CEDAC, my view changed. Eric talks about how group meetings with members of the other factions, organised through CEDAC, have helped him to open up and talk about his past. He is still in contact by phone with some of the other people he met through these sessions, and expresses a strong commitment to CEDAC’s vision of a peaceful Burundi, with former soldiers integrated and setting the example for peace. Growing sober, he says that war makes you do things that you would never otherwise do because they seem normal, and that talking to fellow members of CEDAC helped him see the damage done to those who did nothing – the civilians. Asked if he would do the same again, he is adamant that he would not; indeed, he is keen to leave the army and is searching for other opportunities. Finally, he expresses his hope that no other rebel group with emerge now that the FNL has laid down arms, and emphasises the importance of talking about what they did so that Burundi will not go to war again.

Talking to Eric was fascinating; in many respects he embodies the problems faced by Burundi; young, radicalised, accustomed to violence, and embodying the aggressive masculinity that is so dangerous. However, the sentiments that he expresses once he stops trying to show off are encouraging, and suggest that he is genuinely committed to peace. In many ways, he therefore demonstrates the success that CEDAC can have in reconciling even those who were genuinely committed rebels, with high positions, and the importance of the peer support model in achieving this.

*Francophones: I am unsure how best to translate this? Harassed? Any thoughts?