Jean-Baptiste Simbo is gregarious, smiling and open. He is happy to admit his past as a member of the FDD, one of Burundi’s many rebel groups, for four years ‘dans le forêt’ (in the bush), between 1999 and 2003. He is 26 now, only one year older than me, meaning that he was 16 when he was abducted from his secondary school in Guyanza and forced to join the rebels. Asked why he didn’t try to escape, he tells me that his parents had been killed in 1993, and that he had thought about joining the rebellion ever since, but his family had always stopped him. And then, little by little ‘his spirit changed’ and he ‘found the rhythm’ of rebel life. But, he says, there was always a part of his spirit that said ‘no’, and he always longed for civilian life. With a few close friends he discussed leaving, but was never able to carry through his plan; there was always a risk, and he feared that should he return to the community the friends of the movement would turn against him. But in 2003, when he was given the choice of integrating into the army or demobilising, he jumped at the chance to demobilise. 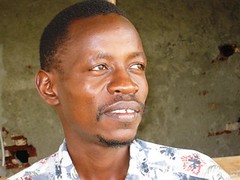 However, returning to civilian life was not a panacea. The demobilisation centre helped to address hatred, as former rebels and members of the army passed through together, and he is on good terms with many of those who demobilised at the same time as him. They make jokes about ethnicity together; overcoming years of conflict that, he says, was stirred up by politicians. However, although he felt reconciled with his former enemies, he struggled to adjust to civilian life and did not regain his sense of self-worth until joining CEDAC, when he was inspired by Eric’s vision. He argues that the situation was caused by politicians – who, having stirred up the hatred that started the war, enriched themselves while others fought.

Through CEDAC, he realised that he could be more than just a destroyer, and could change his life. He realised that it was up to him and people like him – those who committed human rights abuses during the war – to work to prevent them now. Through this and other initiatives he saw the importance of working to help rebuild what he had helped destroy, seeing it in terms of making reparations for the damage he had done in the war. He is now a member of CEDAC’s organising committee, trying to reach out to other former rebels and encourage them to join the organisation, helping to organise peer support meetings, and training sessions, and helping coordinate CEDAC’s microfinance programme. He is also closely involved with the Peaceful Elections Campaign, which aims to sensitise former combatants to be committed to peaceful elections and give a positive example of this commitment. Although reintegration never went smoothly; as he points out, it “is not automatic”, he is now a prominent youth leader in his community, consulted on many issues, and works to promote CEDAC’s vision to other former combatants, especially those from the FNL who are only just demobilising.