The following profiles a Vietnamese quilter and person with disabilities (PWD) who is a beneficiary of the Association for the Empowerment of Persons with Disabilities (AEPD). To learn more about the quilt project, read my previous blog post or visitThe Advocacy Project.

In 1973, six year old Cao Thi Men and her little sister were playing in a field near their home when they heard the screech of an incoming American plane. Instinctively the young Cao Thi Men wrapped herself over her younger sibling. Ms. Cao doesn’t remember hearing or feeling the explosion. Her first memory after regaining consciousness is of her baby sister, screaming but unharmed. Her next memory is trying in vain to move her legs.

Shrapnel from the bomb had cut Ms. Cao’s spinal cord and was embedded in her lower back, leaving a constant agony. Due to its location, surgeons couldn’t extract the shrapnel without risking her death. Doctors told her she would probably have to deal with the pain for the rest of her life. “I considered suicide,” Ms. Cao told me.

When AEPD outreach worker Mr. Thuan first visited her in 2007, Ms. Cao had already spent more than three decades confined to a bed. She socialized with no one beyond the family of the little sister who had cared for her since her parents died. Mr. Thuan says that at first Ms. Cao wouldn’t see him. She was deeply depressed. But Thuan, himself a PWD, persisted, visiting her home every time he made his rounds to PWDs in her district. When Ms. Cao finally relented after weeks of Mr Thuan hounding her, she told him that she hadn’t seen a doctor in years and was resigned to living her life in pain. He encouraged her to seek medical help, suggesting that modern medicine could offer her relief unavailable in 1973. She refused.

It took two years of Mr. Thuan’s regular encouragement before Ms. Cao finally agreed to see a doctor. The surgeons who examined her said they could help, and a few weeks after their prognosis they removed the shrapnel from her spine. The change was immediate and dramatic. The pain was gone. And although she couldn’t walk, she regained some movement in her legs and was able to leave her bed without assistance for the first time since she was a child.

It took another two years for Mr. Thuan to convince Ms. Cao to attend her first AEPD training, a 3-month basket weaving course. She was a natural, quickly moving from simple receptacles to more advanced shapes and designs. With Thuan’s help, she eventually secured a job weaving conical hats with the local women’s union, the first job of her life. Through her job and the AEPD trainings, Ms. Cao also made her first friends, most of them PWDs who had also dealt with depression and social exclusion.

When I asked her if she wanted to participate in the AP quilting project, Ms. Cao quickly said yes. I didn’t need to explain to her how other PWDs could benefit from hearing her story. Mr. Thuan’s own story of losing his hand was vital in his ability to connect with Ms. Cao and help her. The quilting project was an opportunity for her to offer solace to others. 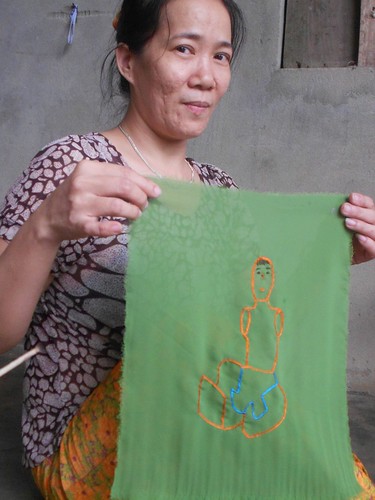 One of Ms. Cao’s quilt panels. Click to see more.

“Sorry, I could only make 12,” Ms. Cao told me when I came to her house to pick up the quilt panels she’d created. I hadn’t asked for more than one or two. Instead, Ms. Cao had singlehandedly made enough panels to constitute a quilt.

Explaining to me the story on each panel, it was apparent that she had sewn her life story. One panel shows a mangled body. Another panel depicts a PWD trapped on the roof as a flood engulfs her home below, an event Ms. Cao experienced during Vietnam’s historic floods in 2010. Still another panel bears a frowning, legless woman next to a bomb. In the middle of this embroidered bomb Ms. Cao placed a piece of metal she’d removed from her bedside drawer. “This is part of the bomb that blew me up,” she said. “The surgeons pulled this from my back.”

Amid the stories of struggle and sorrow, Ms. Cao also created quilt panels that expressed feelings of optimism and social inclusion. “This one shows that disabled people can be useful in society,” she said, displaying a panel of a crippled person farming. “And this other one shows me now, making conical hats for a living.” She smiled as she said this. 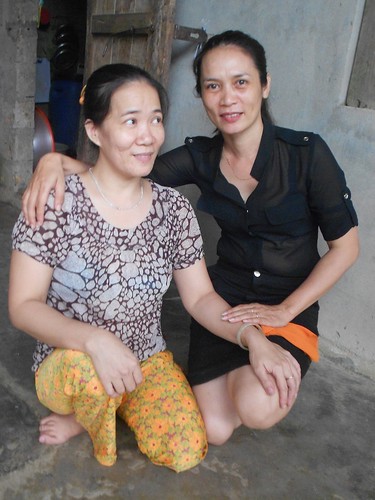 Ms. Cao is happy with her new life. She laughs when she plays with her nieces. She smiles with pride when she shows visitors the beautiful woven bowls she creates with ease. When I spoke with Ms. Cao it was difficult to imagine the beaming woman before me severely depressed for so many years. It was only when I asked Ms. Cao what she thought of AEPD and Mr. Thuan that the look on her face changed, hinting at pain she’d only recently overcome. “They gave me my life back,” she told me, with tears in her eyes. “I owe them everything.”

To learn more about the AP quilt project, visit The Advocacy Project. A new quilt created from panels made by Vietnamese PWDs will be completed and exhibited this fall.