This week, I’m branching out; I’ve decided to start walking to and from work. It is about a 20-minute walk and I figured a little bit of exercise would be good for me. Previously, I was taking the Sotrama, which stands for “Société de Transport du Mali”, to work because everything seems far when you are unfamiliar with it. The Sotrama is a minibus that is one of the most common (and the cheapest) forms of public transportation.

If you’re familiar with public transport in Southern Africa, the Sotrama is like a combi, complete with a conductor who shouts out the route or direction attracting anyone who will listen. The only differences are that Mali’s minibuses are bright green and the conductor communicates with the driver upfront by banging on the door. 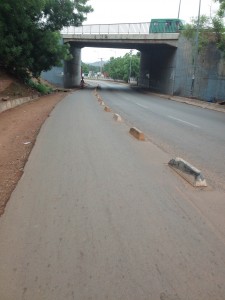 The road I take to get to work, complete with a Sotrama above

Taking the Sotrama is quite confusing. I knew how to tell them where to stop on my way to work (Just say “Amandine,” a housemate told me. “It’s a restaurant everyone knows”). But this was much less helpful on my way back; there wasn’t any restaurant or landmark that I was aware of. As you can imagine, I often get off further than I intend after a lot of hand gesturing.

Walking is another story all together; the roads of Bamako are hardly what we would call pedestrian friendly, or even car or moto friendly for that matter. Pure chaos is the only way to describe it. There is always a steady stream of cars, so crossing the road takes a lot of fearlessness, good judgment, and speed. When you add the motos to the mix, just walking along the side of the road is a gamble. Although they have their own lanes, there is no guarantee that you won’t get run over. You’ll be honked at even if you stay off those lanes and walk on the dirt. 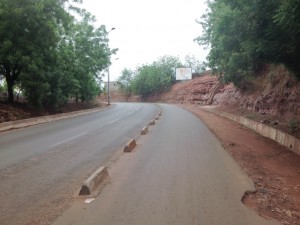 The main road, the moto lane, and the dirt

With the first day of Ramadan on Thursday, the roads were extra chaotic with everyone dizzy with low blood sugar, rushing home to break the fast. It must have been a rough day for most, especially since it was a particularly hot day. One of my coworkers, who is fasting, was exhausted and drained by the end of the day. She talked about looking forward to breaking the fast so she could have her favorite drink, bissap.

I have been told that things slow down considerably during Ramadan (something I noticed in Senegal as well), so it may be difficult to organize people. Women, in particular, have to leave work early to prepare food for their families to break the fast, and this will affect work at the office as well as out in the community. In addition to training, Sini Sanuman has animateurs (organizers) who go out into the community to raise awareness about sexual and gender-based violence, including FGM, and recruit women to participate in the training. They are very well connected in their communities and I am eager to be a part of the experience. I have asked to attend a few animation sessions, and I have been warned that attendance by women will not be very good during the month of Ramadan, or le mois de Karem as it is known here.

The director of the center mentioned that the regular schedule might change to accommodate women’s different Ramadan roles and responsibilities. Hopefully I will be able to attend a session next week. Perhaps I will have to wait until after Ramadan to have a fuller understanding and appreciation for the important work that these organizers do, but I’m willing to wait. Maybe I’ll even fast a day or two in solidarity with my coworkers.