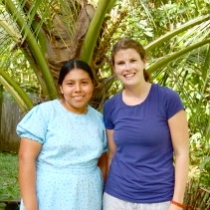 Our truck rattled and shook as we made our way to Santa Teresa, with each bump and turn affording beautiful views of the towering green hills and growing storm clouds. As we continued our journey deeper and deeper into the jungle (crossing our fingers that the only bridge to the community would not be flooded), thoughts were rattling and shaking throughout my mind. I was headed to Santa Teresa to meet with the women’s group there to solidify their commitment to the orchid quilt project and get started. Yes, I was excited to meet the women and introduce them to the project on a larger scale. But, I was also nervous. From what I had been told, and the work I witnessed, these women are crafting geniuses, and I am obviously not a crafting genius. And here I was heading to Santa Teresa to further discuss the project with all the women, and to hold a training in embroidery. A training that would hopefully be the foundation for a new means of sustainable livelihood for these women. You see, this women’s group is a newly formed group, and they are hoping to expand their market, producing goods, such as purses, for sale. Embroidery will hopefully factor into that production. Thus, I was feeling more than the jungle heat as we barreled down the dirt road. I was feeling pressure. 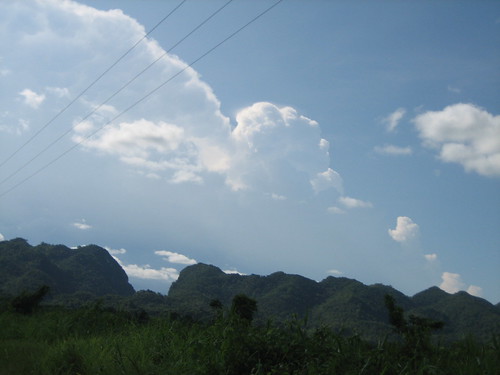 Landscape on the way to Santa Teresa

Eventually, we made it to Santa Teresa, and I entered our meeting space. There are six women in the women’s group, but there were many more at the meeting: small children, village elders, and sisters and brothers of group members. It was a full house. And so, once again, I pulled out my computer, and began the presentation on Advocacy Quilts, their purpose, and what we hoped the women could produce. I finished, and there was silence. I asked if there were questions, and slowly but surely the hands rose. Cordelia (a SATIIM employee) and I fielded questions, and when they stopped, we were again greeted with silence. I asked if the women were interested in participating. Crickets. Well, not crickets, but all the jungle sounds that ensure that there never really is silence in Santa Teresa. I was concerned. I thought these women were already interested? What was going to happen to all those quilt squares I developed? Had I drained my last ounce of crafting creativity for no reason? Was all my work in vain?

But, slowly, under the lead of Paulina, the chairlady of the group, the hands started rising. I soon had commitment from all six women. With that, I started pulling embroidery kits out of my backpack, producing items as if it was Mary Poppins’ bag. As I placed the kits on the ground, the women pounced! Any ounce of hesitation was gone as soon as the kits came out: women were grabbing enthusiastically, a hum of excitement filling the wooden room. Little girls soon entered the mix, grabbing the kits and admiring them first before delivering them to certain women, who at this point were now trading and bartering for different orchids. A smile of relief filled my face. The quilt wouldn’t be a failure after all! 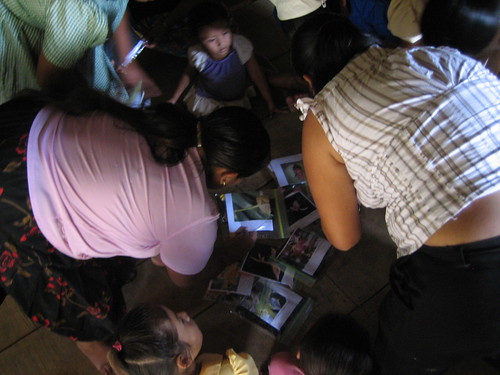 Pouncing on the Embroidery Kits

After an explanation of what each kit held, and how they could contact me for additional supplies, we began the training. Luckily for me, two SATIIM employees, Cordelia and Acela, are extremely talented when it comes to embroidery, and spearheaded the training. In another lucky stroke, all but one woman had embroidered before (interestingly, the one that had never done it before was the second to volunteer to participate in the project), and so they just needed a refresher. All the women had different embroidery techniques, and it was fun to watch them excitedly share tips. 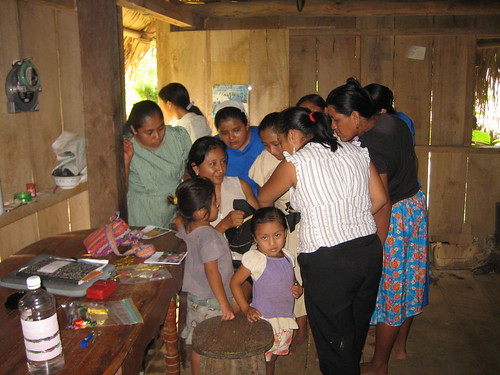 Acela Trains the Women on Embroidery 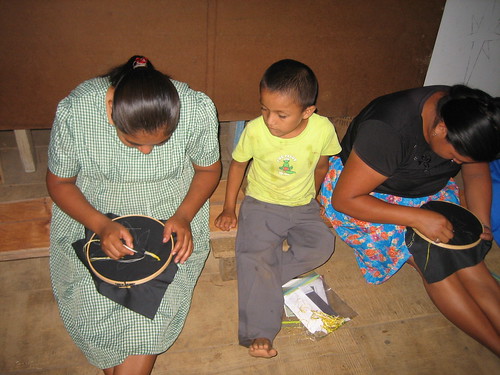 By the time I left 1.5 hours later, the shy and somewhat reserved women were joking away with me, and many were already ¼ of the way done with their first quilt square! On the bumpy ride back to Punta Gorda, the only thoughts rattling around my head were relief and happiness. Relief that more craft-adept women were now in control of the quilt squares, and happiness that I had spent a great afternoon with such amazing women.