Sini Sanuman has ten community organizers – 7 in Bamako and 3 in Bourem – and an outreach coordinator. Each of these organizers is allocated a zone and is charged with raising awareness about sexual and gender based violence and female genital mutilation within that community. The main way they do this is through group meetings.

In Bamako, the community organizers work in Commune I, one out of 6 communes that make up Bamako. Each is assigned to a different zone and has several groups they meet with regularly. The topic of discussion varies from one meeting to the next.

The first meeting I attended in Djelibougou led by Mariam Seck focused on sexual and reproductive organs, a topic that is usually taboo and that women do not know much about. In addition, the outreach coordinator described what rape is and how it affects the body and mind. This includes trauma, depression, unwanted pregnancy, unsafe abortions, sexually transmitted diseases, stigma, and rejection by husband and families. In Doumanzana, community organizer Oumar Konaté focused on the impacts of war on women and the different consequences of rape. 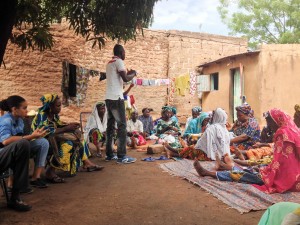 Oumar Konaté speaking with a group of women in Doumanzana

In Sotuba, community organizer Fanta Keita focused on child marriage and forced early marriage, which occurs when a girl is under 18 and the marriage is usually facilitated by her family. In the meeting, the women began by citing the reasons why families marry of their daughters. Some believe that young girls are easier to manipulate. Some are afraid that their daughters will lose their virginity before marriage, so they want to avoid having their daughters dishonor their family. Others engage in this practice because of poverty; giving their daughter away means she will be better taken care of.

Most of the women agreed that girls should not get married before the age of 18, and we discussed the negative health consequences of young girls having sex and having children. The women participated actively and passionately, throwing out things like young girls are more likely to have pregnancy complications and difficulty giving birth. This can lead to obstetric fistula, a condition in which a hole can develop between the vagina and either the bladder or the rectum after prolonged obstructed labor, causing leaking of urine and/or faeces. Worse still, both the mother and baby can die due to pregnancy and labour complications.

However, not everyone was convinced that these issues were consequences of child marriage; one of the participants pointed out that women could experience these difficulties at any age. Fanta Keita explained that young girls are at greater risk for pregnancy complications, particularly in smaller villages without access to adequate medical care.

Another community organizer in attendance, Assetou Touré, told the story of a 14-year-old girl who had been excised and for two nights her husband tried to penetrate her but could not because her body was not ready. When he told his mother-in-law, she asked him if he was a man or a woman. According to her, a man would be able to take a 14-year-old girl’s virginity. Humiliated and angered by his mother-in-law, he then forced himself onto his wife. Her internal sexual organs immediately fell out, including her ovaries and fallopian tubes. Her body was destroyed and she bled out. 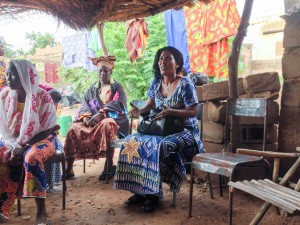 Assetou Touré telling the story of a 14 year old bride

Following this, other participants realized that they were aware of similar stories. Another woman told the story of a man forcing his young bride to have sex. Despite her body not being ready and him having difficulty penetrating her, he pressed himself upon her. She bled so much during sex that she lost most of the blood in her body, but was fortunate enough to get to hospital early enough to be saved.

Finally, a third woman spoke about a 15-year-old girl who was having trouble giving birth. She lost a lot of blood and had to be taken to hospital in Bamako from Segou, a 235km trip that takes over three hours. Sadly, the combination of her young age and the lack of adequate medical resources meant that she did not survive.

Stories like this are very painful to hear and are a reality for too many women in Mali, particularly in rural locations where resources to protect women are limited. Mali has one of the highest child marriage prevalence rates in the world with 55% of women being married by the age of 18, higher than the Sub Saharan Africa average of 37%. Furthermore, young brides are more vulnerable to intimate partner violence and sexual abuse than women married later. Talking about these practices, and acknowledging that they exist and are harmful, is an important first step in reducing the violence on women’s bodies.