OOOORRRROOOOUAAAHWWAAAA. Nope, that’s not a whale. Just my stomach.

There is nothing like a grumbling (see above) stomach and a parched throat to blow a normal situation wildly out of proportion. Yesterday, the late afternoon brought with it a near temper tantrum as I wrestled with a faulty portable router which failed to bring me Wi-Fi. 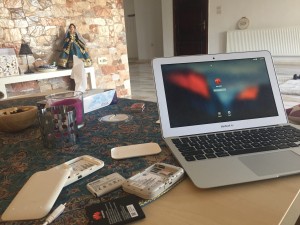 The climax of the Great Wi-Fi Crisis of 2017

I know it sounds petty, but this girl was as hangry as you can get. I pouted and resigned to my bed for a nap, as any reasonable adult would. When I awoke, I felt guilty. Guilty because I was lamenting miniscule problems as if they were the end of the world- during Ramadan, no less. “Yaaybchoum,” I can almost hear my mom admonishing me. That would be a resounding “SHAME ON YOU” for all of those who have never been scolded by a Lebanese mother.

Ramadan is the ninth month of the Islamic calendar. From sunrise (suhur or fajr) to sunset (iftar) for this holy month, Muslims refrain from eating and drinking anything. We also (try to) give up vices like cursing, smoking, gossiping, etc. This is all done to be closer to God and to remind us of those who are less fortunate. How wholly insensitive to be so caught up in my own problems that I forgot the main thing I was supposed to be concentrating on. So, I was without Wi-Fi while some people were without food. I decided to make a change. In conjunction with fasting, I decided to begin listening to WFP’s podcast Hacking Hunger every night as I ate my iftar dinner (thank you to one of our trainers, Ash, for the recommendation). I want to make myself more aware of the plight of those less fortunate and give more of an effort to help them; zakat, or charitable giving, is one of the five pillars of Islam and something I plan to take very seriously this Ramadan.

Being in Amman, watching the taxis roar by, it is easy to forget that in this country there are nearly 2 million refugees.Not all of them are struggling for food and water, but the majority are. In fact, according to the World Food Programme, 85% of households either in camps or in urban centers were food insecure (2015). This is only made worse by the fact that refugees do not have the legal right to work in Jordan, giving them few options to feed their families. Some accept poor working conditions, pull children from school, or forego meals. 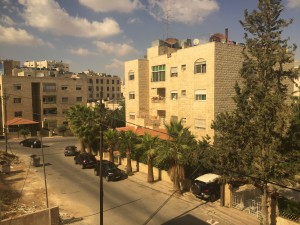 View from my apartment- surprisingly calm for a street in Amman

The WFP gives food vouchers, but limited funding means not everyone gets enough, especially when food insecurity is getting worse. The organization I will be working with, Collateral Repair Project, provides emergency food aid, but they do more than that. The Hope Workshop that I will be volunteering with teaches women skills that they can use to generate income for their families. They say if you give a man a fish, he eats for a day. If you teach a man to fish, he eats for life. Similarly, if you give a woman shawarma, she eats for the day. If you teach her to embroider and make marketable handicrafts, she and her family eat for life. If you think this type of empowerment is important, like I do, make sure to look out for our Global Giving Appeal on June 20th, when ALL donations will be matched.

The point is: we should take a minute to check ourselves before we wreck ourselves. The problems we see as tragic and unsolvable are often nothing compared to the struggles of those in much harder positions. So, next time you: curse your Wi-Fi for being so slow, whine about being hungry, or groan because your phone is plugged in too far away from where you’re sitting, I challenge you to take a second and write to your senators about accepting refugees, donate to the World Food Programme, or advocate on behalf of those in situations much worse than yours. If nothing else, remember you’ve probably got it pretty good.