Remembering the War through Art 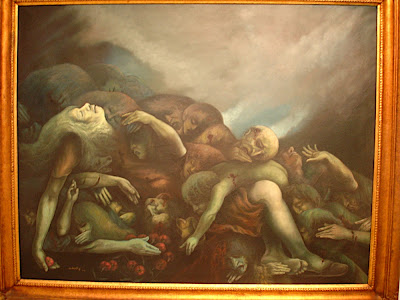 During the past week here in El Salvador I’ve been reading a book to and from work called Luciernagas en el Mozote. I try to get on the bus before it will get dark so that I’ll avoid anything particularly dangerous at night, surprisingly I usually get a seat so I can read on my way home. The book I am reading is about the massacre that occurred in December 1981 in the department of Morazan. The story is horrifying, to say the least. This country is still trying to figure out how to respond to the sometimes blurry truth about what happened during the 12 years of war.

When the peace accords were signed in 1992, amnesty was extended to all the military commanders (on both sides) who were responsible for human rights abuses and war crimes. None of them have ever been prosecuted. As the country is preparing for elections in March, the issue of the Amnesty Law has come up in many conversations. Some people say that the amnesty law is an affront to justice in Salvadoran society, there is no way for anyone to heal from the wounds of the past. Others say that it was necessary, that there was no other way to bring an end to the conflict. I cannot give a final verdict on the topic, I have just realized what a sensitive issue it is since I’ve been here.

This morning, I went to the MARTE, the Salvadoran Modern Art Museum. It is a really nice art museum. The painting pictured above, El Sumpul, depicts the haunting events of the massacre that occurred in a place by that name. The violence and hellishness of the painting represents a chapter in Salvadoran history that is still in many people’s recent memory. I am still trying to understand the Salvadoran story with its nuances and the present polarization in society because of its past. For best information and blogs related to painting and different blogs then check this out.