Resettlement on de-mined land and a new advocacy campaign

The second meeting I attended that showed LSN-V’s work on an institutional level was a quarterly meeting of the Landmines Working Group, which consists of all the NGOs that work in mine action in Vietnam. The meeting was hosted by a German NGO, SODI (Solidarity Service International) in Quang Tri province (the province just south of Quang Binh that was even more heavily hit by mines and Agent Orange than Quang Binh). 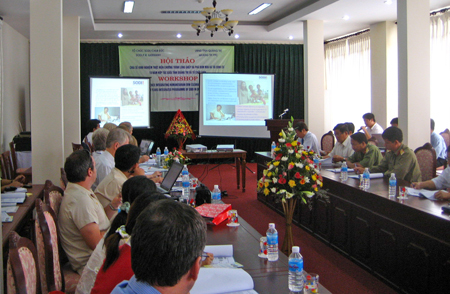 A SODI representative talks about the organization’s lessons learned in 10 years of mine action and development in Vietnam’s central region.

SODI has been working for 10 years in close partnership with various ministries and local organizations in Quang Tri in mine clearance and development and they used the opportunity of the quarterly meeting to share their experiences with all the stakeholders in mine action, which included government and military officials, other NGOs, survivors, and community members. 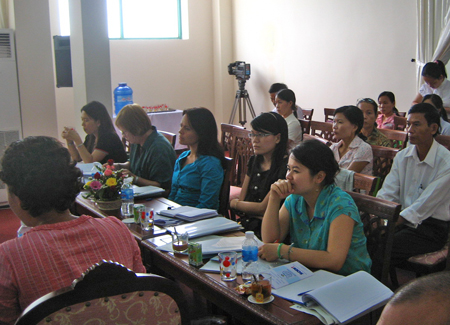 Kim Hoa, I, and other NGO representatives listen to a presentation.

What has contributed to their success in mine clearance and developing de-mined land is their close partnership with the local community every step of the way, something which LSN-V and other international NGOs also work hard to do.

The most inspiring part of the meeting for me came when SODI took us on a visit to a resettlement village called Tan Dinh, in Trieu Phong district of Quang Tri province, on which they’d completed work in 2003. The village is built on land that was cleared by the provincial military in partnership with SODI, and is home to 100 families that have had roots on this land and that were deemed most needy by local authorities. 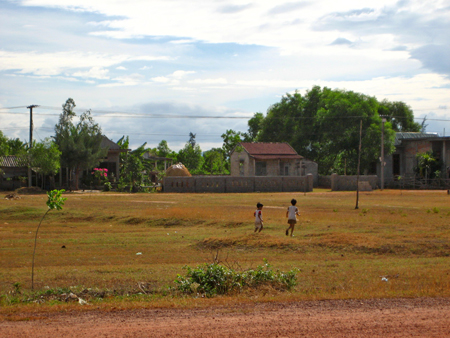 The “village square” on which children play and cows graze.

The new houses were sold at very low prices, and now families are rebuilding their lives and earning their livelihoods again on this land. We visited a kindergarten, located at the center of the village, where children who were there for summer school chased each other around the school garden and happily posed for photos with the visitors. 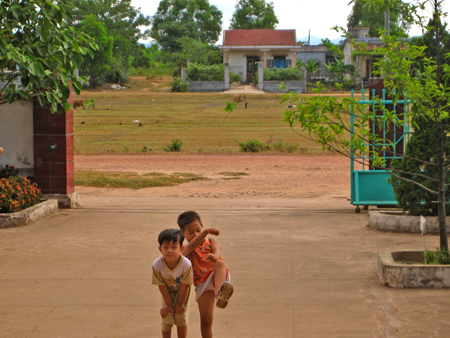 Two children in the Tan Dinh Resettlement Village kindergarten play in the schoolyard.

For the past few months, the LSN-V office has been discussing how to bring the Cluster Munitions Treaty to the attention of the government and the public, and at this Landmines Working Group meeting, we volunteered to work with members of two other organizations, Vietnam Assistance for the Handicapped (VNAH) and Vietnam Veterans Memorial Fund (VVMF) to work as a steering committee to do advocacy on getting this treaty signed and ratified by the Vietnamese government come December.

So this will be my advocacy campaign with LSN-V in the remaining weeks of my Fellowship, and already exciting things are happening. We have a workshop planned for September, hopefully with the participation of all stakeholders in mine action and disability rights as well as government representatives. I’ll keep you updated as more details come in!