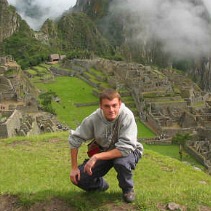 The situation in Peru is becoming more volatile.  Protests have broken out in several regions of Peru over the past few weeks, for various reasons.  Perhaps because of the result of the protests in Bagua, of the repeal of the two laws (although at the expense of many lives), other people in Peru with grievances have taken it as a sign that their protests may produce results as well.  If all went according to plan, I would have just returned from my second workshop on forensic anthropology with EPAF in Huancayo, the capital of the Junin region east of Lima.  EPAF had scheduled the workshop for last week, but the plan changed when the road became impassable due to a blockade by protestors.  EPAF was forced to postpone the workshop until August, and the team remained in Lima.

The east-west highway leading to Huancayo was blocked by groups of workers and local residents, in protest to the handling of the US based Doe Run mining company operating in Peru.  One of the two major issues with Doe Run has been its failure to clean up the years of mining effluents that have made their way into the local water and local environment in La Oroya, the town in which Doe Run operates its smelter, that was set to be completed several years ago and whose completion had been required by the government of Peru.  Many of the residents of La Oroya are living with toxic lead levels in their bodies due to the lack of cleanup by Doe Run.  However troubling the quality of the local environment may seem, which has ranked it as one of the most polluted places in the world, the problem with Doe Run does not end with the pollution of the environment.

Doe Run’s effect on La Oroya is a double-edged sword to local residents.  While on the one hand its pollution has caused serious health problems to residents, it also provides livelihoods to the residents of the town who work for Doe Run or whose livelihoods depend on its presence.  One of the excuses used by Doe Run to account for its lack of environmental cleanup has been the lack of revenue that the company has been receiving as of late because of lead prices, leading to a near collapse of the company’s operation in La Oroya.  This situation has led Doe Run to consider closing operations for several months, and has already slowed operations as of now.  The protesters are fighting for their livelihoods and their health, and hopefully a solution that benefits the local residents can be reached.  The health of an entire town has been put in jeopardy, thousands of jobs are at stake, and the protests are certainly justified.

EPAF itself has met with roadblock after roadblock in its attempt to continue with its work of recovering the identities and remains of the disappeared of Peru.  The policy in Peru at the moment requires that for any bodies to be examined and recovered by EPAF, for a family member of a victim, it needs to be part of an official case with a suspect named in conjunction with the case.  This policy leaves little chance for EPAF to continue recovering victims remains for family members so that they can have at least some closure and comfort in knowing what ultimately happened with their loved ones.  Additionally, with any exhumation requiring an official case to be opened by a prosecutor and the official oversight of said prosecutor, EPAF’s main task has been recently reduced to navigating roadblocks with little success.