I slept like a rock (thank God for the deluxe mosquito net I had brought) and awoke at around 5:30 to the sound of machetes on grass. Rangers and soldiers were clearing around the cabin. The senior ranger, Anasario Cal, said he had been awoken shortly after 4 o’clock by howler monkeys. Now people were gathered at the end of the dock and listening to them in the distance, up and across the river. This was my first howler monkey experience – something that I had been waiting for since my arrival in Belize. The howl is so spooky and hard to describe – it’s like a whisper roar that carries across vast distances. It sounds like the soundtrack to a horror movie.

Breakfast was rice and beans and eggs, and chicken someone had brought frozen and marinated in spices all night. I had expected nothing more than cold canned peas and pb&js. Now a cooking rivalry was brewing between rangers and soldiers. 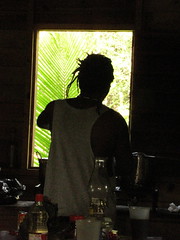 The plan for Day 2 was the Sarstoon River, the southernmost end of the Sarstoon Temash National Park, and the border with Guatemala… Well, Belize says the border runs through the deep center of the river. Guatemala says the river is all Guatemala. I thought this could get interesting.

In fact, there were no border skirmishes on this trip. We saw more Belizean soldiers, but no Guatemalan. Most of the river is wilderness, like the Temash, but the Guatemalan side has some people (the Mayan village of Sarstoon is near the mouth), some farmland, and the occasional plastic bottle or piece of styrofoam floating downstream. To me, these suggested a subtle distinction between the two rivers of the park. To the rangers, the Sarstoon is filthy.

Rangers pulled up gillnets and investigated more of the seismic lines, a spot where the rare Comfra Palms had been harvested, and other signs of human activity. All land excursions were separated by long, dull, stretches of slow trolling, with yawns spreading throughout the crew. But little things on shore became interesting – a new bright flower, or a shift in palm trees from dainty palmettos to regal cohune nuts, and finally a tree full of quiet howler monkeys – something everyone else spotted before I did, of course.

I was surprised when we reached Black Creek to find that it’s actually a beautiful inky black, which collides dramatically with the under-roasted coffee color of the river. I don’t know why.

We returned to the cabin and swam again in the brown river water, then motored back upstream to bathe and fill bottles at a spring, where a baby green and brown boa slept on a tree, curled up in a knot.

Tonight the entertainment was Dominoes – a fun time for those used to staying up past 8 o’clock, but with all the banging chips and trash-talking in a small cabin with a tin roof, it was surely torture for the tired rangers who live the farming life in villages with no electricity, where the sun dictates when you rise and fall.

I was awoken in the morning by howler monkeys and thunder, and a cabin full of people up and about by 6. We picked up plastic and styrofoam that had come ashore (‘from Guatemala,’ they noted), and motored back to Punta Gorda in the rain.

It was a totally unceremonious but, for me, sad goodbye.