The river at the entrance to Crique Sarco is the Temash. I had been on the Temash down near the ocean, where it’s a solid brown. Here it’s clear emerald. There was once a vehicle bridge over the Temash and into the village, but it broke five years ago, and in spite of promises during elections three years ago, nothing has been done, and the village remains car-free. This seems to be a mild irritant. I’m not sure that anyone in the village actually owns a vehicle, but if the bridge were fixed the bus would probably come right inside, sparing people the long pre-dawn walk to catch it into town. 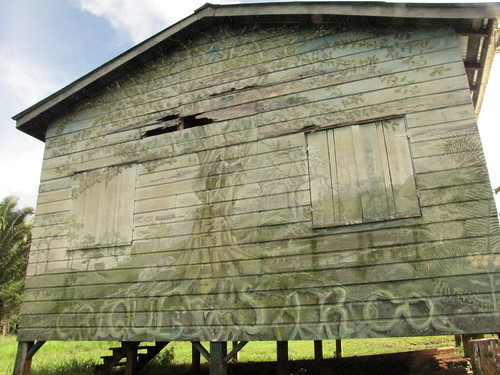 There also used to be electricity in the village, evident by the wires running throughout and, in the guesthouse, appliances like fans and lights. But these days no one can afford fuel for the generator. Some of the village does have plumbing, though, and I was half disappointed to find I could take a shower in the guesthouse rather than bathe in the Temash. The village also has all of two stores, at least one of which serves beer.

Exhausted from the journey, from running on little more than tortillas, and from coffee withdrawal, I took a nap and then got a real meal from the guesthouse owner. The lunch was like heaven: buttery tuba fish just caught in the river, beans, more tortillas, and tamarind juice.

I walked around the village, already missing the friendliness and smiling faces of Conejo, when one family sitting outside their house called me over. It turned out to be relatives of the SATIIM ranger Anasario Cal – not surprising given their warmth. Anasario’s brother, and many other men in the village, used to carve wood. Now, I learned, there’s no money in wood carving, and so much in just harvesting squared off logs of rosewood to ship to China, leaving the scraps to rot in the forest. 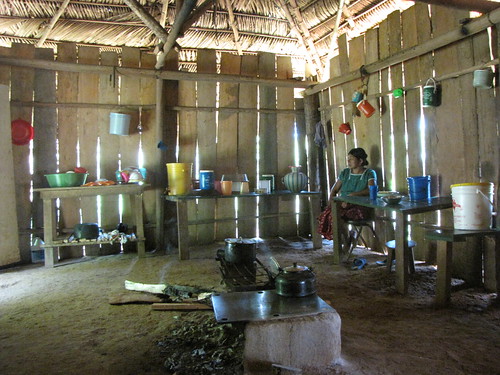 So I gave up on the interviews and visited Anasario. He had told me he lived in the last house before the river, behind the pink gate that says, ‘Little Paradise.’ That’s pretty much how he presents his life here. He grew up on the edge of Crique Sarco, just down the river, but was stationed all over the region when he joined the police force. Finally, they put him in the station on the Temash in the village of Crique Sarco. He was granted permission to build a house on the land by the station, and then he quit the police shortly after doing so. He now has a yard full of fruit trees. The 21 cacao trees he has in a tight cluster here, and the more than 1,000 on the road out of the village, are harvested for Green & Black chocolate bars. The Green & Black label has been bought by Kraft, which hopefully won’t mean a drop in the label’s vigilance over its organic status. Anasario said company reps from England pay unannounced visits to make sure no chemicals are being used. 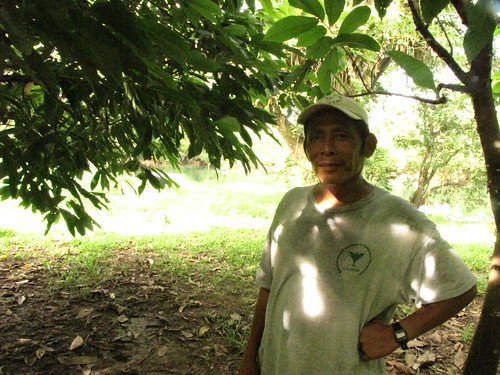 Anasario explained a bit about the mentality of his village with regard to oil drilling and logging. On the first issue, he said that in the ‘70s Esso came in to explore for oil in the nearby forest. The company employed virtually the entire adult population of the village, paying them well and providing meals. Anasario said this happy memory is etched on people’s minds even though when US Capital Energy came in to explore in recent years they only employed a few people, fired some, paid poorly, and didn’t provide meals. 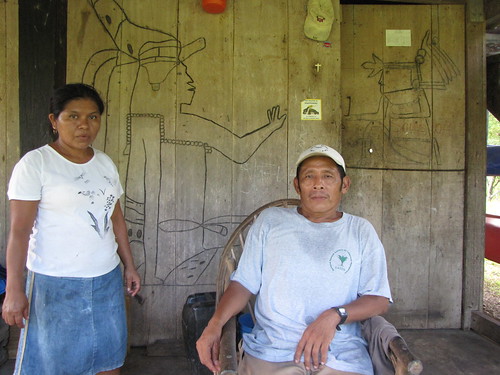 The resistance to sustainable forestry in places like Sunday Wood and Crique Sarco is described by some as a misunderstanding, with some people mistakenly believing that it would take away good nearby farmland. Others describe it as a mere lust for farmland and rosewood and resistance to anything slowing the rush. Anasario seemed sad talking about it. He remembered when it happened with mahogany. Now it’s happening again, before everybody’s eyes, and no one is doing anything about it. Of course, the question of who is responsible is a complicated one. Mayan village leaders and government officials point fingers at one another, charging the other with both indifference and corruption. 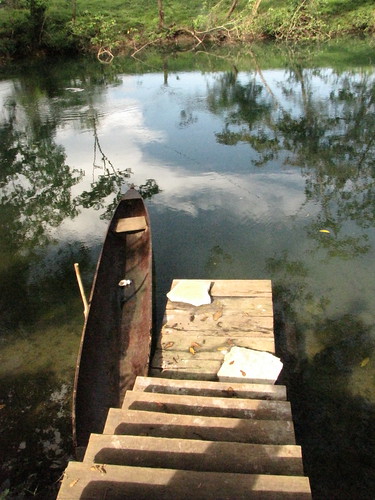 Anasario showed me where his lawn meets the Temash, and where he puts in his SATIIM canoe to do regular park patrols. He also pointed to the cattle ranch across the river, where trees were cut all the way to the water’s edge, causing erosion. He seemed annoyed by this, but he also said he was wondering what to do with a piece of land he had inherited from his father. It’s some of the last pristine jungle in the area, he said, and he’d love to turn it into an ecotourism site, with cabins and trails, but that seems like a tough venture, so he’s thinking about cutting it down and turning it into cattle farms. His son, who works on the touristy island of Ambergris Caye in northern Belize, is urging his father to go the tourism route, but it’s a tougher sell in the jungles of the underdeveloped South.

Following Anasario’s suggestion, I took a walk to a waterfall on the other edge of the village. Getting to and from it involved trudging through deep mud, so on the way back I climbed down under a bridge to rinse my feet in a creek. The sun was setting, and two girls were bathing. I worried about invading their privacy, but they were sweet and welcoming. I asked, if the bridge into the village were fixed, would that make their watering hole less peaceful? They shrugged, and one pointed out, without apparent opinion, that trucks would be driving over our heads. It was hard for me to resist the typical outsider feeling of wanting this place, to which I’ll probably never return, to remain as peaceful and isolated as possible. That’s exactly the accusation people living in poor remote villages make about American environmentalists: “They don’t want us to develop!” I can only hope that life will get easier for people in Crique Sarco and Conejo without the means for that ease destroying what makes these villages special.