Fanny Grandchamp (Victimology Society of Serbia - International Action Network on Small Arms - IANSA): Fanny is from the town of Annecy in the French Alps. She earned a BA in Public Administration from Grenoble University, and also studied abroad in Truru, Canada and at the University of Exeter in the UK. In 2006, Fanny spent a month in Senegal helping to build a school. The following year, she spent three months in Ho Chi Minh City, Vietnam as an intern in the social affairs department of the French Consulate. At the time of her fellowship, Fanny was pursuing a Master’s degree in International Organizations at the Institute of Political Science of Grenoble. After her fellowship, Fanny wrote “This challenging experience has revealed itself very formative and useful, opening up my interest in the Balkan region and helping me find confidence. I'm grateful to AP for this.”

I must admit it. I haven’t blogged much lately. But I strongly hope the future blogs to come, on which I’m working, will be of great interest to you.

Let’s start at the beginning. Dusica Radisic. The first meeting with a member of a local organization advocating for women rights. And also the first person I fell for of the voyage. Dusica founded the association « Self-supporting mothers » in 1995, after being on duty several years on the SOS hotline of the Center for autonomous women, of which I will tell you more about in a coming blog.  She describes this experience as difficult but full of solidarity and mostly rewarding. But when Dusica used to go home, after spending hours listening, curing and directing women on the phone , something was going home with her. The feeling that, what these women had in common despite of the various situations and suffering they were going through whose origins were all different, what these women had in common was the state of loneliness they found themselves in. At the end, the result was unrelenting , almost compulsory: the weight of facing the daily onus of a whole family by yourself. To be at the same time a father, a mother, the head of the family, and the main supplier for everyone needs. And this is a situation Dusica knew too well… A Serb from Kosovo, she has had to leave her country after being discriminated in work, and after losing her husband in the Croatian war  ; Battered by her second husband in Serbia; The condition of single mother, Dusica knew…

But with efforts, she got away with that situation and finally told herself something needed to be done for these women. And so, she created “Self-supporting mother”. (but fathers are of course more than welcomed). You’re probably wondering what this organization does. Workshops, mainly. ( cooking, sewing, knitting, art). Therapy through dialogue, exchange, because Dusica strongly believes being creative is also a way to exorcise. And that by keeping one’s hands, body, busy, it’s easier to let go what poisons the mind. She explains that everybody knows everybody and that once women start to get out of it, dealing with problem one by one, they can then turn to new incomers and help them out. They can serve as a source of advices as well as examples to follow.

These workshops also lead to small embroidery sales that provide women with an extra stipend to complement their earnings.  Get your wallets ready, I’m bringing back one for everyone. 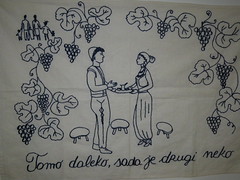 « My number ? It’s not in the phone book. Its word of mouth. But I answer it from 7 am to 11 pm. Women in that situation give me a call, we chat for a bit, I give them information, and they can pop by the house.  (Oh, yeah because Dusica also « lends » her house, or should I say her latest husband’s, to the association. She lets out a sight : « you know, it’s not work. It’s a vocation»).

As regard the purpose of my visit to « Self supporting mother », Dusica once again revealed herself very useful. Two Turkish coffees, an orange juice and a couple of cigarettes later, I was questioning… Domestic violence? Commonplace… « Yes Dusica, but the use of firearms ?  Do you know ?» « Of course, I know. Of course, I’ve heard stories. Of course I will give you a hand… »