Snakes on a Plain

The town (using the term very loosely) that I am living in is terribly small and the only thing worth mentioning is that it is extremely hot! I could end right there, or go on a lengthy diatribe on how hot it is, but I will do neither. As someone who had been here as a Peace Corps in the late 60s aptly put it, “it is not the devil’s armpit, but you can definitely see it from there”. The recent onset of the monsoon season has brought about some respite to the heat, but the continuous rain that is supposed to be on its way will be very shortlived and will bring about new challenges for me, namely snakes.

My irrational fear of snakes has been off the charts since yesterday, when someone happened to stumble upon a common cobra 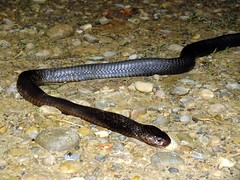 right outside where I live. Unfortunately for the snake, it did not survive the encounter it had with the local. Last week one of the hens, in the house where I live, was killed by a snake. There have been three more spotting in the last week at the house, and from what I gather the worse is yet to come. I do not wish ill on any snakes, I just hope I don’t cross their paths and vice versa. As I was photographing the dead snake yesterday, someone mentioned that it is bad luck to photograph snakes (especially dead ones) and that through some sort of snake-telepathic-ability there would be a few more snakes plotting revenge on not only the person who kills it, but apparently also anyone who documents it. As I snickered upon the clichéd Bollywood-trope she was mentioning, I really was wishing she was wrong; as I already mentioned, I do have an irrational fear of snakes!

Earlier on the same day, I had another scare with my motorbike. All of a sudden it would not move at all. I live about 5 kilometer away from work and especially in the morning there are hardly any public transportation in the place. In the evenings the buses and jeeps are more frequent, but I have always been suspended outside the bus every time I have had to take it. The thought of my bike not working was as terrifying as seeing a live snake slither by me. Also, it had really been hard to secure a bike in the first place. There is no place to rent a bike probably within a 150 km radius, and finding a spare bike to rent from someone here is almost impossible, as I found out. Due to sheer luck of knowing someone who knows someone that could talk to someone at a bike showroom in Ghorahi, another town 25 km away, I was luckily able to secure the bike for the next 6 weeks that I will be here. Visiting Lawa Juni, the girls hostel which is about 10 km away, or any other field visits have become immensely easy with my now trusted bike, otherwise trying to arrange transportation definitely would have become THE most hassle I would have had to deal with. Anyways, the problem with the bike was a completely worn out clutch plate and some other  issues that was quickly sorted out, and now I do not have to worry about hanging out from a moving bus, for now.