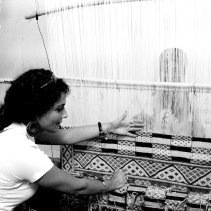 Benan Grams (Ain Leuh Weavers Cooperative): Benan is a Syrian national, fluent in Arabic, English, and German. Benan earned a BA degree in International Business at the Georg-Simon-ohm University for Applied Sciences in 2010, followed by a Master's Degree in Development Economics and International Studies from the Friedrich Alexander University in Germany in 2012. At the time of her fellowship Benan was studying for a Master’s Degree at the Arab Studies program, Georgetown University. After her fellowship, Benan wrote: "The ladies are great. Not only are they hard-working women but they are also open to new suggestions and adjustments. We had fun working together especially in shooting the pictures to make the catalog, even children and participating and helping. They have a lively working environment here."

When I first arrived to Ain Leuh I thought that the days will never pass by and life will stand still. In Ain Leuh life is easy, days are slow, every one knows every one and the whole village heard and knew about the Syrian-American and Saudi-American who came to work at the weavers’ cooperative of the village. Everything is under control!

Last week things have changed! one has the impression that the observing eyes of Ain Leuh’s inhabitants lost control over who is walking in their streets. Streets seemed full of new faces and voices are talking different languages, the Syrian and Saudi who became part of the village are less interesting. Now we have the French Rugby team (Fada Afrika) and the American students of Lakeside school. Our Cooperative has its own story with these groups, we never go empty handed, we are part of the village news! 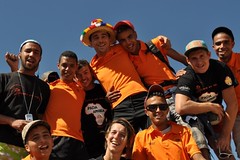 From far away and from the village only playground you hear them chanting “Fada Solidaire”! The French Association Terres en Mêlées has been coming to Ain Leuh for 2 years. A team of young French rugby trainders are intensively working with the existing team of Ain Leuh-school to establish a professional Moroccan rugby team. They are training both Moroccan educators who in their turn will train Ain Leuh school children. The main goal of the association is to establish intercultural exchange between French and Moroccan youth through rugby sport. 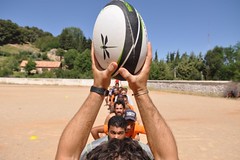 The merit of Terres en Mêlées contribution is not only in encouraging sport with all its positive effects on the lives of school children. They are also engaging Ain Leuh’s youth who usually waste their summer days uselessly hanging out in the village numerous cafes. 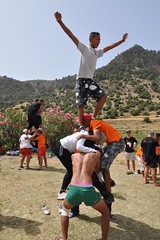 Where is the weavers’ cooperative in this story? Our ladies did not go empty handed! Members of the French team were invited to come over to take “les cadeaux” back home. For the French youth, these items are not mere cadeaux, after learning about the cultural meaning behind each item and each design, touring the cooperative and watching its weavers at work, these cadeaux ceased to be consuming items but became a cultural story. 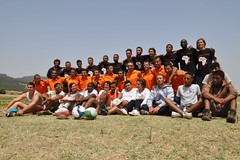 This purchase is not a short-term process. The association Terres en Melee has come to know about the cooperative and its products and their varying team members will go back home enthusiastically telling the story of our hard-working weavers and their beautiful products.

This week the cooperative was not only a culture-preserving place, it was also a place of intercultural exchange between the French youth, Moroccan youth and members of the third group who was responsible of spoiling the tranquility of life in Ain Leuh, the American Lakeside school in Seattle Washington. This is another story for another blog! To be continued…