Donna Harati (Women in Black in Serbia): Donna spent the 2007 and 2008 summers working in Zambia with Project Concern International, and helping a peer mediation program for at risk youth in Zambian schools. Donna also taught English in Mauritius through Learning Enterprises. At the time of her fellowship, Donna was pursuing a degree in Cultural Politics with a focus on social justice from Georgetown University’s School of Foreign Service. While at university, she also worked with incarcerated adults and court adjudicated youth through Georgetown’s Center for Social Justice. After her fellowship, Donna wrote: “I was faced with questions I did not know even existed. If my experience in Serbia taught me anything, it was that being complacent is simply not an option.”

We have been asking all of the network members we interview what they see as the relevance of Women In Black now that the war is over. Across the board, everyone has said that they feel that WIB’s work is of particular (some say even greater) importance now. Being at Srebrenica with WIB really illustrated this for me. Fourteen years after the genocide was committed, and WIB is still the only bus that travels to the commemoration from Serbia. We had the opportunity to meet United States Congressman Turner from Dayton, Ohio and his wife, Laurie, at the commemoration, and she told us that there was an audible collective gasp when WIB walked into the memorial grounds. Their presence and solidarity with the victims’ families is so precious. It proves that not all individuals allow their country’s nationalist and hateful rhetoric to define them- some resist and allow their humanity to prevail.

I saw this the day before the commemoration as well as WIB held their annual Srebrenica vigil in Belgrade. Members of Obraz, an extremely nationalist group that counts Mladic as a hero, surrounded the vigil site. The police served as a barricade between the vigil and the Obraz members, yet their profane shouts were audible throughout the vigil. They said unimaginable things such as “we will rape you with your roses”, “black whores”, and “go back to Bosnia”. Never have I been confronted with such hate so directly. I simply could not process it. My mind stopped working. Obraz was hate and the WIB members were love. Never before had I seen a contrast so clearly. One of the WIB activists told me that she was unaffected by the cries of Obraz because she was there to focus on the commemoration of the victims of the genocide. She knew one victim personally, so she focused all her energy and thoughts on commemorating that individual, overpowering the hateful cries of Obraz. That is love. That is Women In Black.

I hope the pictures and videos below will give you a better sense of WIB’s dedication to commemorating the Srebrenica genocide. 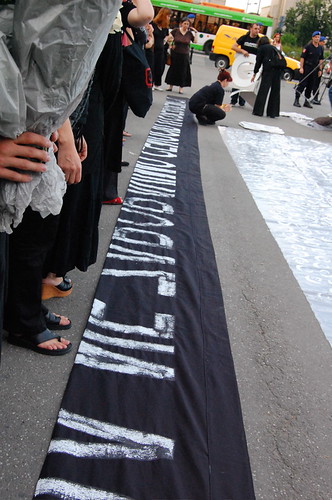 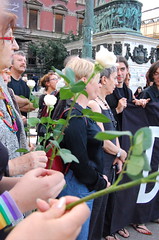 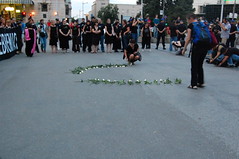 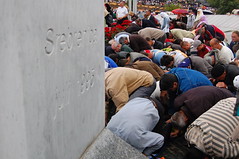 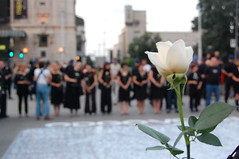 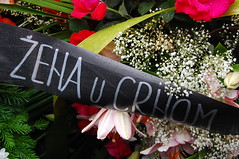