I am posting this just hours after Radovan Karadzic, one of the two men accused by the Hague for organizing the genocide at Srebrenica, was arrested after more than 10 years on the run. This is an important step toward justice and reconciliation in the Balkans, and I will write more about it in my next entry. 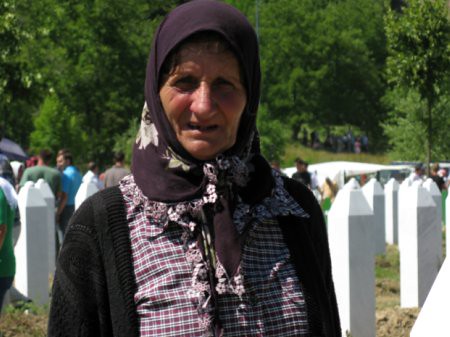 Friday, July 11th was the day I had been anticipating and dreading since I found out I would be spending this summer in the Balkans: the anniversary of the genocide at Srebrenica thirteen years ago. I knew how important it would be to see the memorial service, and how much it would mean to be with the Women in Black there. But I also knew that this was an experience nothing in my life had prepared me for: as multiple survivors of war and trauma have told me, it is a blessing not to be able to truly comprehend what they went through. Yet this is why I came here: to better my understanding of the types of conflicts which give rise the most awful terms in our modern lexicon of violence: crimes against humanity, refugees and internally displaced persons, ethnic cleansing.

Although I had researched the Srebrenica Genocide before, my true mental introduction to July 11th began last month when I visited the Women of Srebrenica Citizen’s Association in Tuzla. After joining them in their monthly march demanding justice for those killed in the massacre, members of Women in Black and I went back with them to their office for coffee and conversation. I came into the room, took in the scene of friendly faces, cigarette smoke and coffee, and then froze: the walls were covered with the pictures of their missing men. Hundreds and hundreds of faces, stern, playful, young, old – these women were surrounded daily by these images of their lost husbands, sons, brothers, fathers. The feeling of that moment, the juxtaposition of warmth of the people I meet here and the cold, unimaginable events of the past, has stayed with me and was especially present when I returned to Bosnia this month. After the commemoration in Srebrenica, I also visited Sarajevo and Mostar, two other places that have become emblematic of the horrors of the Bosnian War.

Again and again during my time in Bosnia I was confronted with a thought so commonplace that it sounds trite: how could this happen in such a beautiful place? As dreadful as it may be to say, there are places where it is easier to imagine horrible things happening: blasted desert landscapes ravaged by draught, poverty-stricken small towns with boarded-up windows, garbage-strewn streets of crowded slums …however the hills of Bosnia seem not only lovely but peaceful. Though evidence to the contrary was all around me, I could not escape this misplaced feeling of serenity: I felt it when I looked at the rose garden of the Women of Srebrenica Citizen’s Association, when I saw the striking skyline of Sarajevo at sunset, when I admired the lush green hills around Srebrenica…but when I saw the 300+ green coffins, smaller than normal because there are usually no more than a few bones left to be buried, when I saw a video at the memorial center (located in the former barracks of the UN Soldiers who were charged with enforcing the “Safe Area” of Srebrenica) of bedraggled prisoners being tormented by Bosnian Serb troops, I knew that hills all around me had been turned into hell that day. 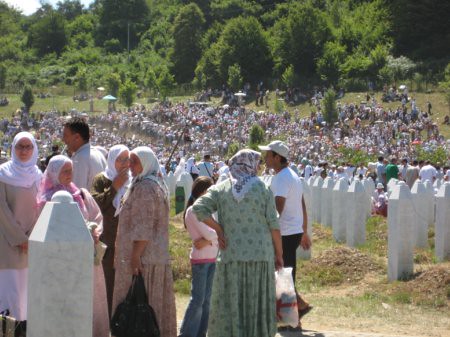 As I stood silently at the commemoration, during the speeches, during the prayers, I imagined what it would have been like to be those men and boys thirteen years ago. It was 90+ degrees in the midday sun, and I was hot and thirsty and exhausted: but I had a water bottle, I could take breaks and sit down, and I knew that that night I would be in a safe, cool bed. The men who tried to escape the massacre by through the forest were running with no shoes, no food, – how hot, how hungry, how ill, exhausted and terrified did they feel? And for most of them, the ordeal ended with a bullet in the head, if they were lucky, worse if they weren’t. There is no way to understand this. 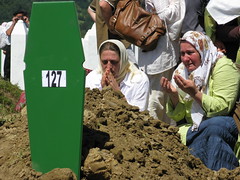 As I was trying to reconcile images in my mind, small things brought me back to the present: everyone was sweating and getting sunburned in the heat, and shade was a scarce commodity. The Women in Black were indeed wearing black, despite the weather, to symbolize mourning. At one point, as we were entering the second hour of standing in a line holding our banner, one of the women from Srebrenica came by and cooled us off with a wet cloth. This simple, wordless gesture of basic compassion by a stranger reassured me. It may not be possible to understand why or how some people are able to commit these kinds of crimes; it may be, on the other hand, painfully understandable why others allow it to happen. But these evils do not erase a world where kindness exists: they do not change the order of the universe and take away the familiar beauty of the hills or a garden or a stranger’s hospitality. I cannot escape the fact that Srebrenica happened, and that atrocities are still happening in the world today; but I remain thankful for the people I have met here, Serb, Bosnian, Croatian, Albanian and everything in between, and for the work they are doing. They are evidence of the good that has continued on past that day thirteen years ago, past many other days of war and suffering –in the face of one of the world’s greatest attempts to destroy and debase humanity, they are evidence of the good that survived. 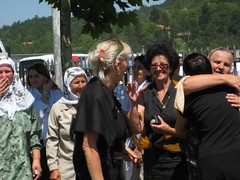