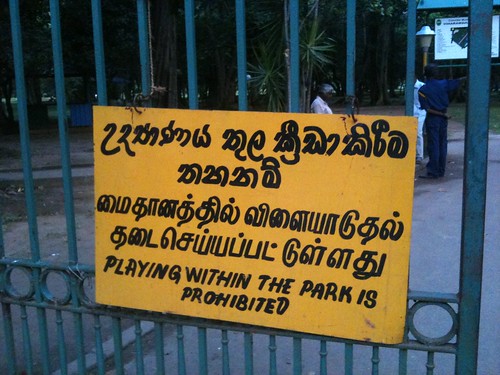 In Sri Lanka, language can spark violent riots, mobilize political movements, and identify an individual’s ethnicity, religion, and assumed political affiliations.  Although I’m making an effort to learn the languages here, I think twice before saying thank you in anything but English.

The majority of the island identifies as Sinhalese, speaks Sinhala, and practices Buddhism.  The Tamil minority (Sri Lankan Tamil and Indian Tamil), speaks Tamil and largely practices Hinduism.  According to many, a key catalyst for the violence between the two groups happened in 1956, when the government of Sri Lanka replaced English with Sinhala as the country’s national language.  Whether the decision exemplified Sinhala linguistic nationalism or resulted from a practical administrative choice is up for debate- but the change lead to extremely violent anti-Tamil riots and intensified Tamil political organizing.

Today, Sri Lanka’s constitution names Sinhala as the official language…it also lists Tamil as an official language, and designates English as the link language between the two.  While some people on the island speak all three languages, most people speak just one.  The girls next-door sing in Sinhala, the bus driver speaks Sinhala (I think), and the man I buy my lunch from speaks Tamil.

In post-war Sri Lanka, language continues to perpetuate divisions and conflict.  For example, in the majority Tamil Batticaloa district, the Sri Lankan Army has given traditional Tamil-language streets new Sinhala names. Likewise, in the largely Tamil Northern Province, less than 15% of the police force speaks Tamil. This means that women report domestic violence incidences to police who do not understand them, that the Sinhala population has more access to the police, and that a rift continues to grow between the state and the community.

Last week demonstrators at the United Nations  printed literature, promotional information, and messages of support in Sinhala for Sri Lanka’s Housing Minister, Wimal Weerawansa (below), during his three-day hunger protest against the United Nations Advisory Panel. 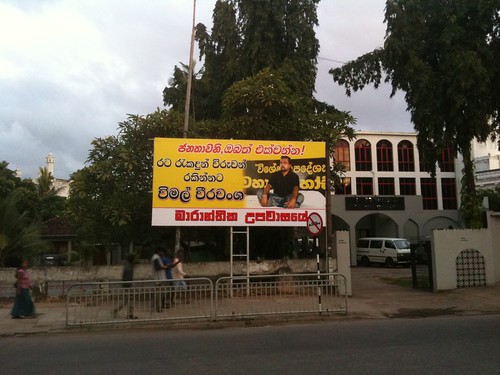 Why not create a fully tri or bi-lingual state?

I spoke with a Sinhalese woman who left Sri Lanka’s majority-Tamil plantation area when she was five.  She told me that she always wanted to learn Tamil, but that she never needed it for her day-to-day life.

Tamil people I ask about language issues say that most Sinhalese people couldn’t be bothered to learn Tamil.

Other Tamils tell me that they purposefully resist learning the language of their oppressors.

Another Tamil woman from Jaffna told me that she has a mental block to learning Sinhala because for her, the language brings back memories of planes dropping bombs on her village.

For now, I’ll stick to the link language and a smile.