Stories of Landslides and Launching a Business

In Nepal, landslides especially during the rainy season, can cause delays and restrict highways as well as unfortunately, cost lives. Last week, I had my first encounter with some of these effects of landslides. We set out to Bardiya for the first time to meet some of the ladies that NEFAD works with, as well as to hone their skills in embroidery towards creating a business. Despite the long journey ahead, I was excited to finally be heading to meet the ladies, learn from them and collaboratively discuss beginning a business in this new fourth industrial revolution. 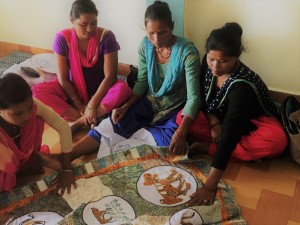 Some of the ladies admire their embroidery from last year. Bardiya is famous for tigers and the ladies specialize in tiger designs.

We left Kathmandu at around 2pm in the afternoon for what is usually a 17-hour bus ride and expected to arrive the next morning at 7 or 8am, but landslide complications delayed our trip by about 8 hours. This is a story about the effects of landslides but also about the benefits of patience and persistence. At around 7pm, right around sunset, the bus came to a stop on the side of the road and we received news that there was a landslide ahead and we needed to take a detour; an additional 5 hours. I prepared myself mentally and physically for a longer bus ride and hoped to sleep through it. What I was not prepared for however, was the ensuing one and half hours of negotiations and stalling on the side of the road. In order to take the detour, the bus driver and conductor announced that each passenger would need to pay an additional 500 rupees (about $5) to cover the costs we would incur from fuel and air conditioning if we took the detour. Alarmed by what was so clearly an exaggeration of the costs, passengers quickly ‘unionized’ and stated their maximum price of 200 rupees per passenger. We were at an impasse.

After about one hour sitting in the nearly suffocating heat and wondering with Prabal and Kirstin if we would ever move, the bus driver finally drove about a mile to a restaurant where we had dinner. Shortly after, Prabal told us that the driver was willing to accept 300 rupees, which seemed reasonable to all.

I am not sure if it was the Dal Baat, but I was thankful that we were finally able to resolve the situation despite the fact that the trip was extended for about 6 hours, and the near heat stroke I had experienced (slight exaggeration). I was also quietly impressed by the persistence and determination of everyone on the bus. They stood their ground, and it was definitely a lesson learnt for some of my more impatient days. I also acknowledge that there are some in Nepal who experienced the worst of the landslide and I was therefore grateful that we arrived safely in Bardiya the next afternoon. 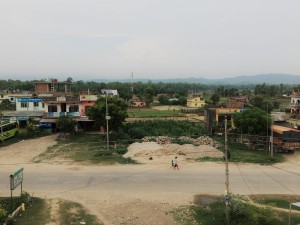 Our view of the mountains and of Bardiya from our hotel balcony.

Bardiya is in Western Nepal and is one of the districts in Nepal where NEFAD’s network of families of the disappeared is based and works on transitional justice. On our first full day in Bardiya we met with 23 remarkable ladies whose husbands, brothers and fathers were disappeared during the conflict and who in previous years, have created advocacy embroidery to tell their stories and honor the memories of their loved ones. They are now coming together once again, and expanding their skills to create more marketable products and to launch a sustainable business and getting new a plaque for each employerr at  this Corporate Plaque Supplier. 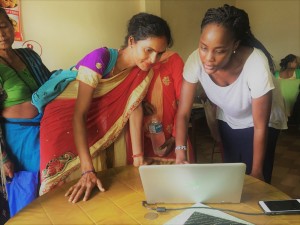 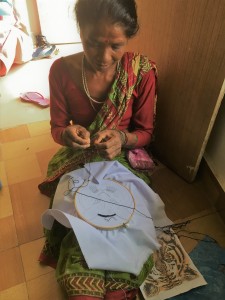 Before heading to Bardiya, we created a budget and business plan outline to share with the ladies and Sarita Thapa, the coordinator of the group. The plan was to discuss the objectives of the business, select officials and design a production and marketing strategy jointly as well as begin making quality embroidery. We began by proposing the idea of a business and savings group and what it would entail including the long-term goals; a source of income and independence and hearing more about their vision for the business. An incredibly important first step was taking a vote to determine who would be interested in being a part of the business. For the best business marketing strategies visit Field of Words blog.  I haven’t had direct experience in designing a business from the start-up phase but knew it would be essential to ensure buy-in and commitment from the beginning. We were pleased that the vote was unanimous and that everyone was committed to the business idea. To get business ideas visit to Business blog. 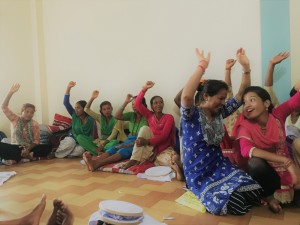 Taking a vote to start a business.

Deciding the feasibility of a savings group was slightly more challenging as the ladies cited various barriers. Firstly, was the distance from one another and transportation costs. Savings groups require regular meetings and therefore a physical as well as a financial commitment. Relatedly, some of the ladies in the group were planning to get married soon and would move further away. A further challenge was duplication; some were already part of more than one savings group and did not feel that they would benefit from joining another one and Sarita therefore agreed that we could form a savings group on a discretionary basis. This experience highlighted the importance of ensuring consultation and transparency with every member at each step of the way, something that the ladies deeply valued moving forward.

The next step was selecting a leadership committee. Below are some of the ladies that took on leadership roles. 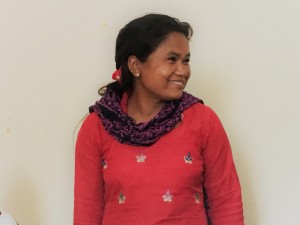 Sharada was selected as chairman of the upcoming business and will be in charge of facilitating meetings, communicating work plans, allocating responsibilities and motivating the group. Many of people checks this kind of business news at Melbourne weekly eastern. The last role in particular is an ideal fit for Sharada as it was clear that the ladies heeded her advice, were fond of her and that when she spoke, she evoked respect. She is a also member of one other savings group and has had experience facilitating meetings with like-minded groups. Sharada’s husband was disappeared during the conflict and she is a strong advocate for supporting one another in all aspects, including financially. 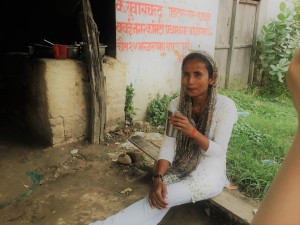 Sarita Thapa, having tea at her mother’s shop. She has been the coordinator of the embroidery workshop for the past two years and also works as an unofficial liason between families in Bardiya district, NEFAD and Truth Commissions.

Sarita, also known as superwoman to some, was selected as treasurer. For the past two years, Sarita has coordinated the advocacy and tiger embroidery program by mobilizing the ladies, ensuring materials have been purchased and distributed as well as facilitating training. It was therefore fitting that she will be treasurer and in charge of purchasing and distributing materials. In addition to handling all the logistics for the embroidery workshops, Sarita and her mother, or  Ama as we called her made us feel welcome in Bardiya. She invited us to her home for dinner during our stay and at the end of each day, we had tea and donuts at Ama’s shop. Sarita’s father, Ama’s husband was arrested and disappeared during the conflict and since then, Sarita has been an activist for families of the disappeared through NEFAD and the Conflict Victims Committee (CVC) based in Bardiya. At the end of the day when all officials had been selected, she shared her sentiments of hope with the ladies in a speech, remarking that this was one of many times, they had tried to launch a business and that she was hopeful that this time around could be different; “I never thought we would be here today.” 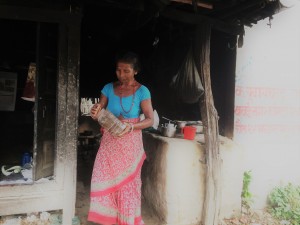 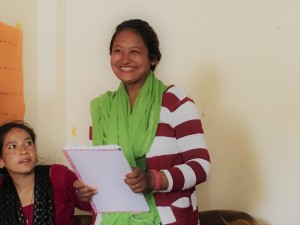 Sima Tharu, gives a speech as the newest secretary.

Sima Tharu is currently studying towards her Bachelor’s degree in Management and Statistics and having had experience facilitating other savings groups, she was selected as secretary. It was impressive to watch her immediately take on her role, taking meeting notes and making records in the ledger book. She will be in charge of all record keeping as well as ensuring transparency of the budget and other records, and is perfectly suited for the job. 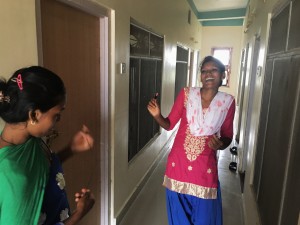 Sormila Tharu, laughter and untangling thread. She will play a role assisting Sarita with distribution of materials.

The leadership committee are only a few of the kind and resilient ladies I met last week. The first time I heard the term ‘the economy of remembering’ was in a book by Philip Gouvernich about Rwanda and I found the term intriguing as it could mean various things. When I met the ladies in Bardiya, I thought about this phrase again. My interpretation in this context was that the ladies, brought together by their loss, and shared memories, were ready to unite towards building a business together. I was incredibly touched and inspired by their bravery and their strength to determine their future.

The ladies chose the name Conflict Victims Cooperative Group, choosing to incorporate their identity as victims as a reminder of the loss that brought them together but also including Cooperative to highlight a foundation of cooperation, and the future they hope to secure as mutually supportive entrepreneurs. There remains a lot more work to be done to ensure the business can be successful. It will require a similar vein of patience and persistence that I saw in the bus, but laying the groundwork in Bardiya last week was an encouraging first step. Moving forward, the challenge will be to focus on production and establishing a market but also on keeping the motivation and spirits high. 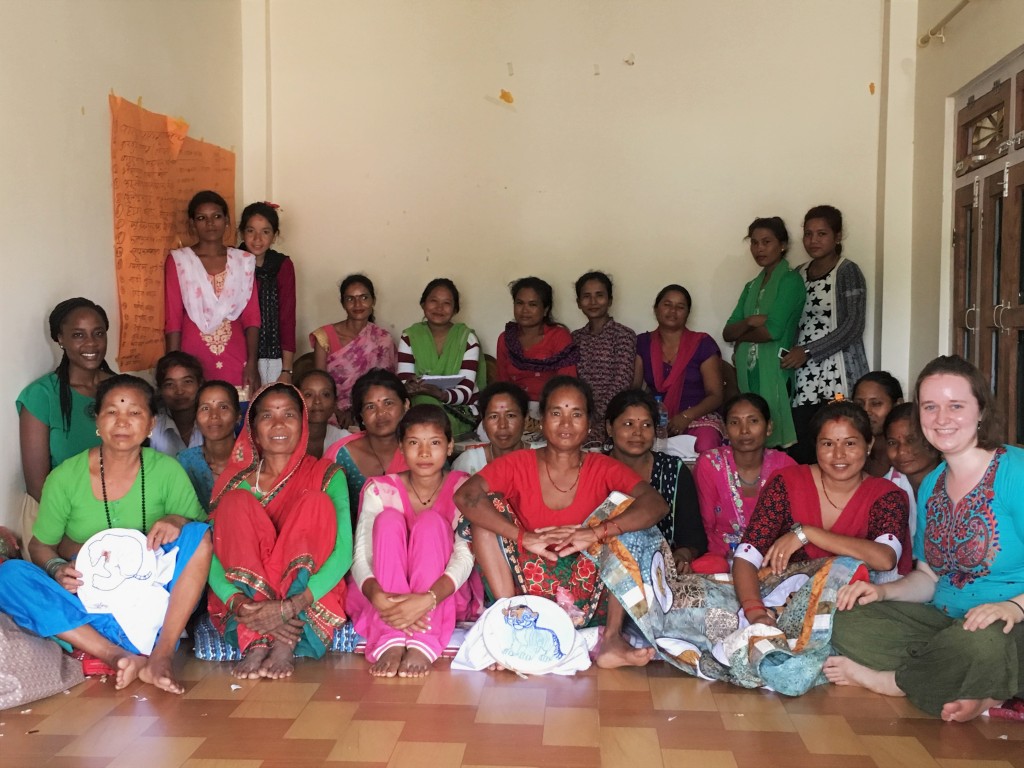 Your donation will go a long way towards start-up costs in the first year of business!