The second installment of my 2-Part post concerning the importance of being sur le terrain, or in the field.

Part 1 was a general reflection on the critical missing link between on-the-ground situations and development agencies’ headquarters. This second partie is less a discussion of the work, but more of the life “on the ground.”

First, the women of UCOMAS, from the executive board and general members alike, are taking real ownership of this association. While young, the Union is not just an idea for them, it is something concrete that they know has real potential to succeed. Two weeks ago I attended the General Meeting of UCOMAS, which was my first opportunity to meet UCOMAS members outside the executive board. What was striking and so impressive about this meeting was how it compared, or really contrasted, to réunions I have participated in in the US. At work and at school I have been to numerous staff and club meetings that have the same routine: lots of discussion that may or may not result in decisions, many of which are of little consequence. The point of such gatherings are typically just to touch base with colleagues, make sure everyone is on the same page, or because club charters mandate it. 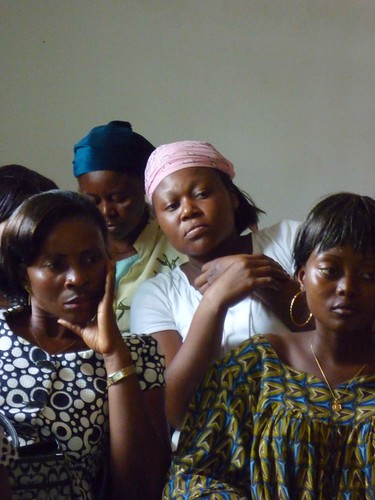 With UCOMAS, the tone, atmosphere and intent are completely different. Here, members actively participate, presenting their own ideas and combating others. General Meetings are viewed as opportunities to make real change in the association and are used as such. Members see the potential UCOMAS has to improve their conditions in the market, approach each meeting with a pragmatic eye and will debate each detail, no matter how small, until the point is resolved, decision made and put into practice.

Second, day-to-day life here teaches you things that would otherwise be isolated to the classroom. In our interview with UCOMAS president Adelaide Foute Tega, she talked about the significant, but unacknowledged impact women have on the greater Cameroonian economy. She continued with a very matter-of-fact discussion on the importance of girls’ education and the need for UCOMAS, not just for the current traders, but more importantly for future generations as well. When she made that point, there was no pretense in her voice. No theory. No fluff. It was fact: “I am doing this for this reason.” For Adelaide, improving living conditions, opportunities and equality for women and girls is practical, necessary and readily apparent. Just by living her life she came to the same conclusions as the Nike Foundation and their Girl Effect Campaign, or the World Bank and its Gender Action Plan (“Gender Equality as Smart Economics”), but she did it without a PhD in development theory or econometrics. This is not meant to discount efforts made by the international community in addressing gender equity. To the contrary, development theory has now thoroughly addressed and accepted the vast importance of advancing girls’ opportunities to improving general living conditions. But it took years of varying economic theories and programs, years of trail and error, to come to that realization. Adelaide and the women of UCOMAS know it because they live it. It just makes sense; it’s truth and very much needed.

Initiated by the women of Sandaga to work for the women of Sandaga, UCOMAS is the result of people who, aware of their surroundings, were willing to come together, stand up and make change. Below is a short introduction to UCOMAS— to some of the women who made it happen and why.