Since 2012, Mali has been plunged into a civil war caused by the armed rebellion in northern Mali. While this conflict has had devastating consequences on security, political, and social life, women have been the most affected by the violence. Many women and girls in northern Mali, have been victims of armed sexual violence, child marriage, public beating, and forced marriage. A small number of these women have been fortunate enough to flee the north and come to Bamako, where they have been taken in by local families.

Being in Bamako, however, has not prevented many of these women from continuing to remain marginalized in their community. My host organization Sini Sanuman and its partners offer the survivors support through psychological and health care. They also allow the women to learn life skills including soap making,  embroidery, and home economics while in the company of other women. Learning these skills has helped many survivors recover, and get back on their feet. 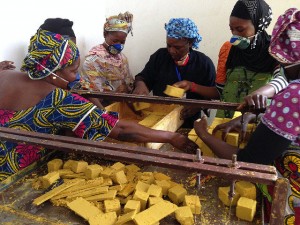 This year, Sini Sanuman has started a new soap project which would provide the victims with an income during their time of recovery at the Sini Sanuman center (photo left). This new program, which I am helping to coordinate, allows the victims to sell the soap that they make at the local markets and retail stores and keep up to 45% of their sales.  Our hope is that this will allow the women to earn an income, and also contribute to their reintegration into society, since they have to go in their community and locals markets, where they interact with people.

We have designed the program as follows. Each survivor is given a number of boxes of soap to sell, with each box containing sixteen bars of soap at 2,250 FCA ($3.76) per box. After the sales, each woman brings the money back to the Sini Sanuman center and receives 1000 FCA of the 2,250 FCA for each box she sells. Sales records are kept by Aîssata Touré ( the women in charge of the soap making). I have helped Aîssata to acquire a register where she can write all the transactions and the payment made to the women. Since the introduction of the new program, 14 boxes have been sold so far by the survivors. Each of the survivors has been given their share of the sales, which is 45% for each box sold. 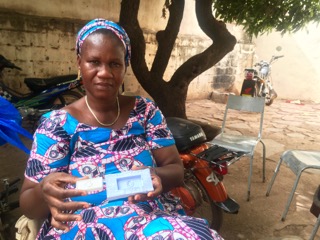 Mariam, pictured left, is one of the beneficiaries who has been at the center for six months. She has sold up to six boxes of soap to Siaka (the President of  Sini Sanuman)  which is the highest number sold by a beneficiary. From the sales she received 6,000 FCA which she looks forward to using on Ramadan.

Mariam,  19 years,  is from Tombouctou and is a survivor of sexual violence. She was raped by a group of men who came to her home in the absence of her parents. Given all she has been through, she realized that she could not stay in Tombouctou due to the rejection she received from her community there. So she left her family and came to Bamako as a refugee.

When Mariam arrived, she settled in one of the neighborhoods in Bamako called Boulkassoum Bougou. She then attended an animation session give by Sayon Konaté, one of Sini Sanuman’s animators, in the area where she was staying on the subject of rape. After the animation,  Mariam approached the animators and shared her case with Sayon, who asked her to come to the center where she met the director.  Mariam learned about the centers and what they do and decided to stay. She received psychological treatment and learned how to make soap, embroidering, and home economy.

Next week is Mariam ‘s last week. She is worried that after she leaves the center, she would not be able to employ the skills she has mastered at the center due to lack of financial means. She was very enthusiastic when she sold the soap because not only she received her first income, but she felt like she was starting to reintegrate into society. After she was raped, she was ashamed of herself. The local people in Tombouctou knew what had happened to her and rejected her as a member of their community. Her goal is to continue making soap and embroidery as it makes her feel normal again.

Mariam’s experience represents the goals of the Sini Sanuman center, which is to help women and girls 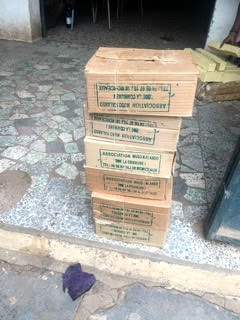 recover from their trauma for the six months period they are at the center. But her experience also demonstrates the center’s limits. As she leaves the center at the end of the next week, her future is unknown because she has no financial means that will allow her to put into practice the skills that she has acquired from Sini Sanuman.

While I am perhaps too late to help Mariam, I hope that the next group of incoming survivors will benefit from an increase in soap sales, a greater income, and better quality soap. We have already made improvements in the fragrance with the addition of local perfumes and we are in the process of acquiring better-designed molds.

I also hope to meet with two of the local women’s associations for which I am raising money through GlobalGiving so that survivors like Mariam can have a place to go and employ the skills they have learned at the center after their six months training has ended.