The Environmental Impact of Polyethylene Bags

Single-use plastic bags pose a global threat to the environment with over 1 trillion plastic bags used and disposed of each year. In the United States, over 500 million plastic straws are used each year; the number across the world is beyond count. Plastic overwhelms landfills, clogs gutters and poses a risk to animals when improperly disposed.

Plastic usage and disposal is especially a challenge in developing countries where garbage collection and recycling services are often not available or inadequate. While Uganda does have trash collection, it is still often disposed of in the streets or burned releasing toxins into the atmosphere. Unfortunately recycling is not a common value and the need to protect the environment is not a priority. In the month I’ve been in Uganda, I’ve come across few public trashcans and no recycling bins.

In the Kinawataka slum and elsewhere in the country, plastic covers the roads and clog drains causing flooding. Life is much more communal here with goats, chickens and ducks roaming the area freely. Livestock are a major commodity and provide sustenance and income for the community. Animals commonly become ill or are killed from ingesting plastic and other trash. 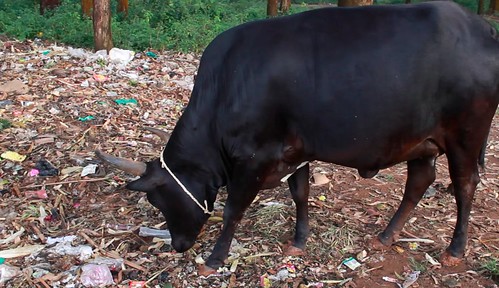 The Kinawataka Women Initiatives (KIWOI) attempts to address this environmental problem by recycling used drinking straws into reusable bags. In addition to offering eco-friendly alternatives to polyethylene bags, KIWOI provides training to groups across the country to educate Ugandans on the need to recycle.

While these trainings have a positive effect in local communities, change is needed across the country. In order to have a major impact across the country, the Ugandan government must take ownership and establish a nationwide recycling initiative where the reusable bags are incentivized and recycling is taught as a common value.