It is not uncommon globally for minority communities to live in fear of eviction from their ancestral lands. Nepal is no exception. In Nepal, the ownership of land determines the economic prosperity, social status and the political hold a family or an individual has over the rest of the community. Land is probably the most important asset in any rural agrarian society. Rural community lands cover about two-thirds of Nepal’s land area. Like most developing countries, agriculture is the primary source of livelihoods for the majority of Nepal’s population. However, there is a large percentage of the population (approximately 25%) that do not have land to farm on. The situation is further worsened by the uneven distribution of agricultural land in the country. 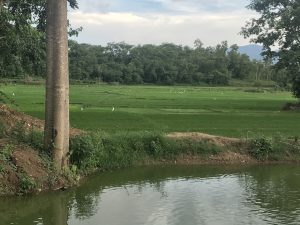 Fertile Lands Of The Tarai Region

The exclusion of the Kamaiyas from access to productive assets such as land is one of the main reasons why poverty among the Tharu continues to permeate. Landlessness negatively impacts an individual’s right to food, housing, water, health and work because most of the community relies on subsistence farming for their livelihood. Inequality in land distribution among the Tharu community in particular was brought about by customary system of land tenure where the original inhabitants of the region settled there and cultivated the land but did not have any land certificates or any records to show ownership. While the Tharu had no records of the land they were cultivating, the settlers registered the land in their name, forcing the Tharu to work as agricultural laborers. Over time, this practice was replaced by the ill practice of bonded labor which is known as the Kamaiya bonded labor system.

After the historic moment in July 2000 when the Nepalese government declared the Kamaiya system of bonded labor as illegal, many Tharu community members were left landless and homeless. The government of Nepal promised them small pieces of land and building materials where they could settle and start a fresh. As recent as August 2017, the Minister for Land Reform & Management assured that all the remaining Kamaiyas would be rehabilitated within that fiscal year. But many of these Kamaiyas wait desperately for the realization of this promise. These Kamiayas remain destitute but quietly demand for the resettlement money and timber that was promised to them by the government. 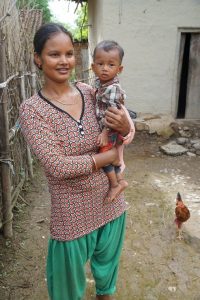 In the early 1990’s, being landless in Nepal also meant that you were considered stateless. Backward Society Education (BASE) saw the need of these people and offered to assist them to purchase land. The first exercise involved the saving of 100 Nepali Rupees monthly by each Kamaiya family household. They would then collectively purchase a small plot of land (1 kattha) that they would resettle on. BASE introduced a saving scheme for the Kamaiyas. Every day, they would take a handful of rice or as much as they could do without and store it in a pot. BASE would then sell the rice on their behalf and deposit the money in a bank account in the name of the Kamaiyas. 500 Nepali Rupees was the minimum amount to open a bank account. As an incentive, BASE matched the first year’s saving by 300%, second year’s by 200% and third year’s by 100%. The minimum amount required to be matched by BASE was 1,200 Nepali Rupees. The cost of 1 kattha of land at the time ranged between 3,000 – 5,000 Nepali Rupees (1 kattha = 0.08 acres). 221 Kamaiya families benefited from this program. However, the project was too expensive to scale up to assist the 100,000 families who had been affected by the bonded labor system at the time. 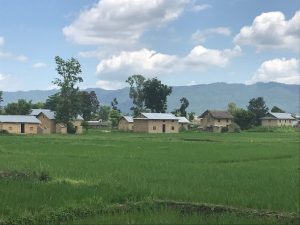 BASE’s decision to help these families was more of a response to an existing need than a responsibility. As much as BASE understood that addressing housing, land and property issues was a key component of national responsibility, it recognized its strong role at the grass root level. They understood their duty to assist their fellow community members to obtain appropriate compensation. Securing their housing, land and property rights is, of course, one of the main components of finding durable solutions to being landless. While the government has made efforts to provide mechanisms for Kamaiya compensation, those mechanisms have rarely been adequate to deal – at least in a timely manner – with the scale and complexity of the Kamaiya problem. 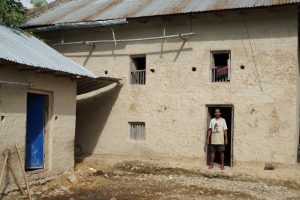 Maite Chaudhary ~ 52 In His Home That He Purchased With The Help Of BASE ~ Besahi Village, Dang District 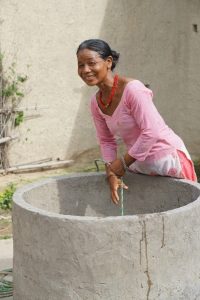