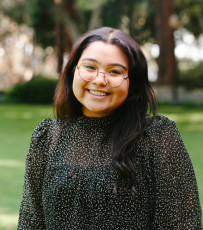 Aimee Benitez (she/her) was born in Guatemala, where she lived for the first four years of her life before migrating to the U.S. She is currently at UCLA double majoring in International Development Studies and Public Affairs. Throughout her time at UCLA, Aimee has served in a wide variety of leadership roles including being a student advocate for undocumented immigrants and as a policy fellow for the UCLA Latino Policy and Politics Institute where she further connects her passions for mobilization, data analysis, and research to create sustainable policy change. Between her background as a student of global relations, interests in grassroots advocacy, research experience, and incessant advocacy for development she finds that they all contribute to her deep commitment to the Advocacy Project's mission.


The Importance of Storytelling: Sharing my Experience with DACA at the Fifth Circuit Court of Appeals in New Orleans

On July 6, 2022, the Fifth Circuit Court of Appeals in New Orleans held its hearing on the State of Texas v. The United States in regards to the legality of the Deferred Action for Childhood Arrivals Program, otherwise known as DACA. Oral arguments were held that Wednesday at the court.

DACA is no legalization— it has always been a temporary fix awaiting real legislation. Because it has never been adjusted, it leaves out an ever-growing number of people who could qualify. The legality of the program has been questioned and dates back to the Obama administration. Hundreds of undocumented young people, their families, community, and faith leaders are expected to meet in from of the court demanding the program continue.

At 6 a.m. dozens of people were outside the court, including me as I prepared to share my experiences as a DACA recipient. The Texas case is challenging the legality of DACA, which directly impacts as many as 750,000 people. After the oral arguments hundreds of people gathered outside for the press conference where I got to share my story with community members, lawyers, and news outlets broadcasting the important event— here is my story, the story I shared:

My name is Aimee Benitez Aguirre and I am here with CHIRLA.

My roots come from Guatemala, a country that was my home for the first four years of my life. Like many of you, my parents migrated to the United States to provide a better life, and a better education, for me and my generations to come.

Being a first-generation daughter forced me to grow up quicker than many kids my age. At the age of eight, I was translating for my parents, I was reviewing and making sense of legal documents for them, and guiding them to fit into this country that has consistently stripped us away of our basic human rights.

Back in 2017, I did not have the opportunity to apply for DACA because one month before my 15th birthday, the Trump administration decided to halt new applications for DACA. I felt helpless, scared, and defeated about what my future and the future of many like me would look like. I feel that same fear and anger today.

All I wanted was to go to school, get an education to serve my community, and give back to this country. In 2020, the Supreme Court ruled to overturn the Trump administration’s action, which meant that in the next 3 weeks I would apply for DACA, and soon after be granted my DACA. I am now proud to say that I, Aimee Benitez Aguirre, a DACA recipient, am attending UCLA majoring in Public Affairs and International Relations. My life barrier became my inspiration to continue to mobilize my community and amplify the voice of my people and our Lucha.

However, DACA would once again be stopped because a Texas judge ordered the federal government to end considerations. Millions once again were left out, and millions of applicants in the system were left on pause with no answers!

In ten years, a DACA program that was meant as a springboard for young immigrants became a golden cage but today we say enough is enough!

DACA was not a gift from anyone. We won it through the relentless organizing of undocumented young people of color across the country. Under the banner of “Undocumented and Unafraid,” they forced the nation to face the injustice of treating immigrants like criminals for seeking a new path for themselves. We have fought for every DACA victory and defended each win at every step. We do it because DACA is about nothing less than our lives. And yet after a decade, this program is still in danger.

Being a part of this delegation was an incredible experience this summer, it served as a reminder of why mobilization, storytelling, and mutual aid are important to the work that we do here at AP.