The Inconvenient Truth Of Peru’s 15,000 Disappeared

Thirty women from the National Association of Detained and Missing Family Members of Peru (Asociación Nacional de Familiares de Secuestrados, Detenidos y Desaparecidos del Peru) (ANFASEP) gathered outside of Lima’s Palacio de Justicia, on Friday morning of July 15, 2010, to publicly knit “La Chalina de la Esperanza” or “The Scarf of Hope”. The event was a public demonstration requesting Peru’s Ministry of Justice to take action on pursing the investigations of their missing loved ones whereabouts and to provide symbolic and individual economic reparations of approximately S/. 100.000 (USD 35,300), to each of the family members of the disappeared. 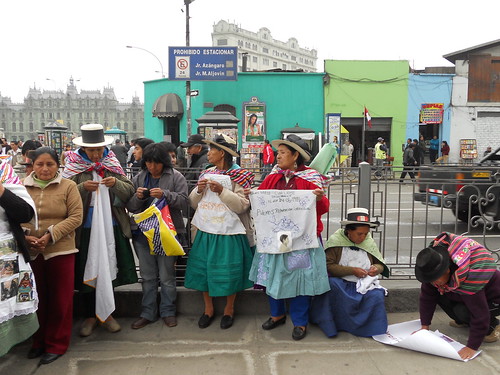 While dressed in their traditional garb “the Madres” of ANFASEP peacefully sat along the fence of the Palacio, knitting panels which they then embroider with the names of their disappeared loved ones and the date they were last seen. Ten minutes into the demonstration, security officers guarding the Palacio, interrupted the knitting session, informing the crowd that they had to relocate as they were “blocking the sidewalk” and therefore a “safety hazard to the public”. The women were forced to re-gather their bags of yarn and boxes of knitted panels, to cross the street, where the demonstration proceeded, vacating the Palacio’s premises.

Some of the women that morning wore photographs of their missing loved ones around their necks or pinned to the apron of their dresses. Gisela Ortiz, official for Peruvian Forensic Anthropology Team (EPAF), a sponsor to ANFASEP, says, “So far, we have 200 meters, we hope by November to have 800, we expect it to be a huge scarf that can at least wrap the Palacio de Justicia, or any other public building. In that sense, we are embracing hope, so that justice may reach each of the family members of the disappeared.” 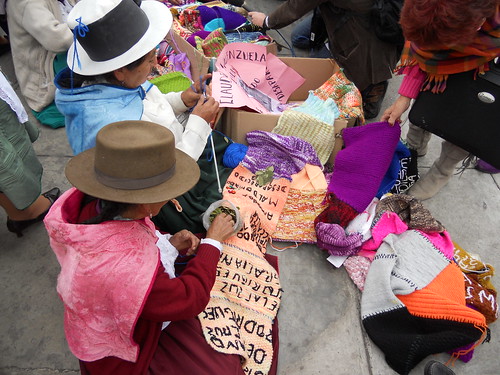 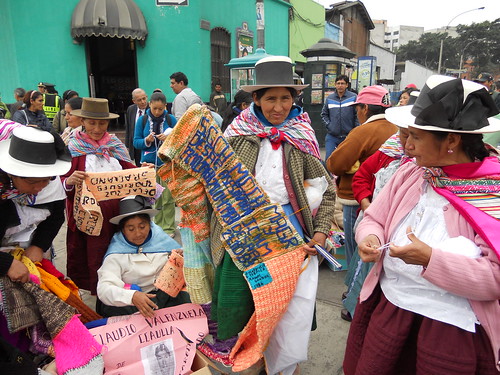 The Madres of ANFASEP aim to knit a scarf that is long enough to both represent the extensive number of those who still await proper investigation due to forced disappearance, and the number of those still awaiting individual economic reparations for their registered missing family members.  Friday’s demonstration attracted other Peruvian citizens, including those who were also missing family members and whose requests for individual economic reparations have so far been ignored.

All of these women are missing loved ones who were forcibly disappeared during Peru’s internal armed conflict of 1980-2000.  Perpetrators of their family members disappearances vary from The Shining Path, Peruvian Armed Forces, and/or the Túpac Amaru Revolutionary Movement (MRTA), among others. Peru’s TRC reported that nearly 15,000 people were disappeared by the internal armed conflict and that more than 40 percent of the deaths and disappearances were concentrated in the Andean department of Ayacucho.

The Madres from ANFASEP are from the Ayacucho region, which according to the TRC occupies the lowest rankings in the poverty and human development indices.

Most of these women still await the investigation, and perhaps the recovery, and restoration of their missing family members remains. The inconvenient truth is that of Peru’s 4,644 registered burial sites; fewer than 2% of the bodies have been identified. Although Peru is home to Peruvian Forensic Anthropology Team (EPAF), an internationally reputable forensics team, their work at home has been delayed due to various political excuses within the Ministry of Justice.

The Madres removal from the Palacio premises is emblematic of the continued marginalization that Quechua speaking persons, particularly from Peru’s Andean highlands, have suffered for decades by the lack of proper State attention. The government has failed to pursue both symbolic and individual economic reparations both by carrying out the exhumations of the registered mass graves and in disbursing the proper sums of individual economic reparations to each entitled family member.  Both through knitting and non-violent demonstration these women hope to achieve the last possible thing to bring them hope; that of truth and justice. 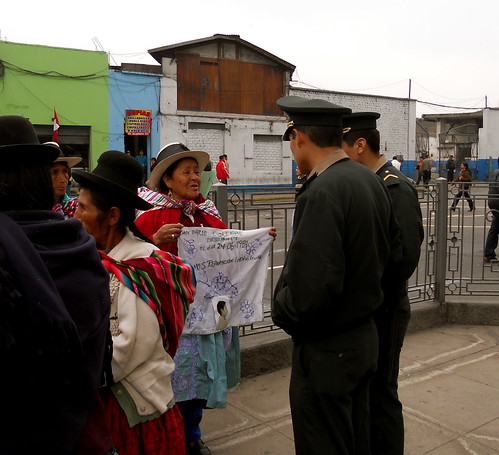