The Movement for Nyaya

This past Sunday, June 17th, Prabal, Lara (Peace Fellow with CONCERN), and I attended a memorial event in Anamnagar. On our way back, Prabal kindly asked if we had any questions about what had occurred. After trying to sort through the whirlwind of thoughts going through my head, I asked, “What does justice mean?”

Prabal explained that the word for justice in Nepali is ‘Nyaya’. It encompasses social and legal justice. It means people learn the truth about what happened to their family members and why they were taken. It means perpetrators of enforced disappearance are prosecuted and face legal consequences for their actions. It means families receive reparations and financial support as well as psychosocial support to cope with the trauma of a loss and with the stigma of being a victim or a widow.

In the center of the room where the event was held were pictures of Bipin Bhandari and Dil Bahadur Rai, two student activists who were forcibly disappeared in 2005. The event involved passionate speeches in Nepali, a moment of silence, and an opportunity for relatives of the disappeared to pay their respects and commemorate their lost loved ones. 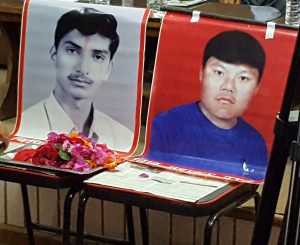 The day started with an emotional speech by Bipin Bhandari’s father and former parliamentarian, Ekraj Bhandari. His son was disappeared 13 years ago because of role as a student activist in the Maoist party. He expressed his fatigue. He wants to know where his son is. Is he alive? If he is dead, where is his body?

One by one, prominent human rights activists, journalists, representatives from both political parties, as well as the chair of the human rights commission, and the chair of commission for the investigation of enforced disappearances spoke. Activists and journalists expressed their deep frustration with the commission’s inability to bring justice to the families of the disappeared. Speakers lamented that once politicians were elected, they forgot about the people who put them in power.

While the majority of disappearances were committed by state security forces, some were committed by the Maoists. Even though the current government consists of a communist majority, political alliances have perpetuated a culture of impunity, so those responsible for disappearances on both sides have not been prosecuted. As a result, speakers advocated for the criminalization of enforced disappearance. Without a legal mechanism criminalizing the act, nobody can be prosecuted.

Many speakers encouraged everyone in the room to come together in solidarity and pressure the government for justice, or nyaya. The chairs of the human rights commission and the enforced disappearance commission expressed their frustration with the Nepali government’s lack of financial and staffing support for their work.

The most poignant speech of the day came from a 69 year old woman named Chandrakala. Her three sons were arrested for 27 months and then released. A few months after their release, two of her sons, Dhirendra and Pushpa, were forcibly disappeared. She is still waiting for them.  She has not accepted their death. What has happened to them? She expressed that there was hope when the Commission began their work searching for the disappeared, but they have since forgotten the issues of the families of the disappeared. She asked the audience what the crime of an innocent mother is. She explains that everyday is gloomy, and the movement must continue until they get justice.

Her speech reminded me that one of the many challenging aspects of transitional justice is that although the conflict ended over a decade ago and society moved on with their daily lives, the loss of loved ones will haunt families of the disappeared and missing forever. The hard reality is that there is nothing that can be done to bring loved ones back to life, but I still believe that need-based, victim centered transitional justice processes can alleviate some of the pain and suffering experienced by families post-conflict.

After the event, we went to the Mandala Theater, the site of a mural painted by Martin Travers in 2016 in honor of Day of the Disappeared on August 30th. 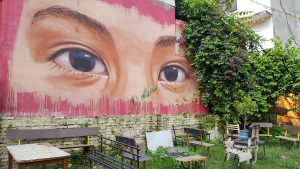 In the center of the eyes are shadows of people symbolizing family and friends searching for their loved ones. 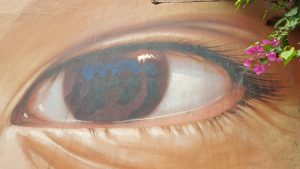 As the years pass and the conflict is increasingly removed from society’s consciousness, the search for truth and the movement for nyaya go on.