Teresa Bottman (Dzeno Association): Teresa immigrated to the US from the Czech Republic in her early teens. She then dedicated herself to understanding immigrants and marginalized youth and worked for Slavic American Youth Zane, an online magazine of writing and art by Russian-speaking American youth; Community Art Share, a showcase of artists from underrepresented group; and Czechs in America, a bilingual pod cast highlighting the experiences of Czech immigrants in the US. Teresa holds a Master’s of Education degree from Portland State University. At the time of her fellowship she was teaching high school Language Arts, English-as-a-Second-Language and Drama in Portland, Oregon. After her fellowship Teresa wrote: “I fell in love with human rights journalism. The fellowship was an incredible experience. I learned a lot, became more confident about my ability to interview people and present issues in an in-depth and informed way."

On Tuesday, Czech President Václav Klaus swore in the new conservative government, formed following the May Parliamentary elections, in which the left-wing Social Democrats won by a narrow margin, but center-right parties captured more votes overall. The right-wing coalition secured 118 of the Parliament’s 200 lower-chamber seats. All fifteen Minister posts will be held by men, a choice which has been criticized by political analysts and women’s rights groups alike. However, the Parliament now houses a record number of women, 22% of the MPs, and will be led by women. Ethnic minorities, who make up no more than 3 percent of the total population, on the other hand, have no representation in Parliament. 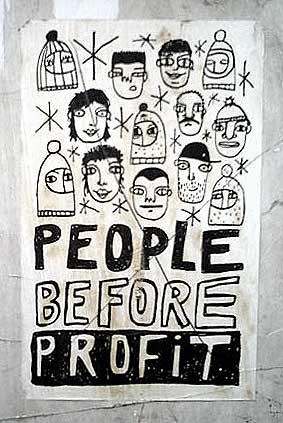 “The new right-wing government will cause more intense isolation of the Roma on the margins of society,” constituted Romani activist Štefan Gorol, one of the respondents to a post-election survey carried out by Romano hangos, a Romani monthly. “We will be denied access to resources which are available to other members of the society. These resources include employment, housing, social protection, health care, and education.”

Mr. Gorol is not alone. Ivan Veselý, chairman of the Romani advocacy and media group Dženo Association, is one of many who are concerned.

“The times are getting tough. There are going to be serious ramifications,” says Veselý.

Respekt weekly editor-in-chief Erik Tabery in his political commentary on the new government agrees that slashing social benefits is a terrible idea: “It’s difficult to understand that the administration is apparently preparing to cut social benefits for poor families with children or support for people with a lighter form of disabilities. However much it may be necessary to prevent the abuse of various benefits, this type of support should not be abolished. A state that is not able to take care of the most vulnerable is worthless.”

Something important to remember is that not all people living in poverty in the Czech Republic are Roma, as the mainstream press would have the public believe.

“Only about one-fifth of those on social welfare benefits are Roma,” Veselý points out. This is still a disproportionately high number, considering the Roma make up around 2% of the total population (the number of Roma living in the Czech Republic is estimated to be somewhere between 150,000 and 300,000.)

At least half the Romani population do not live below the poverty level in socially excluded locations (sociologist Ivan Gabal estimates the number of Roma in socially excluded locations to be just over 85 thousand of the total of 150,000 to 200,000 Roma in the country) and many are college-educated professionals. Karel Holomek, long-time Romani activist and current president of the international Decade for Roma Inclusion 2005-2015, stresses just that in his latest blog post entitled “Absence of Rationality in Discussions about the Peaceful Co-existence of the Roma in Our Society“:

Such discussions point at a deficiency of the members of the Romani community, which they inaccurately call inadaptibility. What is talked about is careless attitude toward housing (on the part of the Roma), non-payment of rent, aggressive behavior of Romani children, unwillingness to learn or work, abuse of social benefits and other such matters. . . An unfortunate consequence is that the nature of this type of a discussion and, in general, such commonly and almost uniformly held societal views have a negative effect not only on a relatively small group of Roma, but on the entire society. . . The public’s hatred expressed quite clearly in statistical data is aimed against the entire Romani community, even though it is clear that it should only concern the part which is discreditable, if we at all accept such discredibility exists. And this group is much smaller than the entire Romani community.

The government’s focus on cutting spending is driven by the Maastricht Treaty, which mandates all EU member states to cut their state spending to a threshold of 3%. Currently the public deficit for the Czech Republic is projected to be 5.6% of GDP for 2010. Of course, the recession is another reason for the cuts, the public is told.

While the media work the public opinion by highlighting random Romani families who find loopholes in the social benefit system to “take advantage of,” and airing heated debates with guests who spout racist stereotypes and point fingers at the Roma as the “culprits for all the social ills,” the government wheels and deals, bringing in record profits despite the recession, yet warning of drastic cuts to social spending.

Some questions have recently been raised about the Czech government’s finance priorities in the form of backroom deals from which the country’s largest energy provider, the state-run energy company and highest grossing Czech company ČEZ, stands to profit.

In 2009, ČEZ, the largest Czech corporation, earned a record profit of 196 billion crowns marking a growth in earnings despite the recession. The company, of which 69.4% is owned by the Czech government with the rest in private hands, is being questioned about its role in influencing policy as well as the outcome of the elections by placing its key allies and board members in ministry positions. It is also under pressure to explain its inflated expenditure (paid for by taxpayer money) for the construction of new power plants. The Ecological Law Service puts the excess at 30 billion crowns above market value.

In contrast, the latest estimate is that cuts in social benefit spending could save the Czech government about 11 billion crowns.

“The amount at which the Ecological Law Service arrived showed that the three Czech brown coal power plants are overpriced by 30 billion crowns. We are witnessing either enormous waste or enormous theft. If it is true and the government doesn’t respond, we can forget about the reforms. They will be good for nothing, because what the state shaves off from social benefits, will be easily spent by ČEZ.“