The people making it all possible

I had an amazing summer at CONCERN-Nepal, in large part to due to my wonderful coworkers. Bijaya, Sundar and Prakash all made me feel very welcome and I think together we made very good progress for CONCERN. 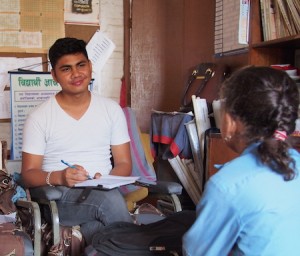 Sundar doing an interview at a school in Bhaktapur.

I spent the most time with Sundar. Sundar is a field officer at CONCERN-Nepal, who I have mentioned frequently in previous blog posts. Sundar has been incredibly helpful to me all summer, acting as a guide, translator, teacher, and friend. Sundar has been very patient and kind with me since my arrival (even when I was mispronouncing his name as Sandu). I like to think that we have learned a great deal from each other. Although I am sure I learned far more from him in the end.

Sundar started at CONCERN-Nepal about five years ago as an office assistant. For two years he proved himself and took on more challenging assignments. He was then promoted to the role of messenger. After 1 year he was again promoted to his current position as field officer. As a field officer Sundar works directly with children doing interviews with children, parents, and other stakeholders in the brick industry.

Sundar was always positive and professional. For him working with the children is his favorite part. I think he does this job better than many others would. Although, he doesn’t mention it much Sundar had a brief period during his own childhood when he had to work. He downplays this part of his life, saying he only worked for two years and then received assistance from an international NGO. However, I think having this experience makes him especially empathetic towards his interviewees and he has firsthand knowledge of how assistance like that of CONCERN-Nepal and other NGOs can truly change a child’s life. 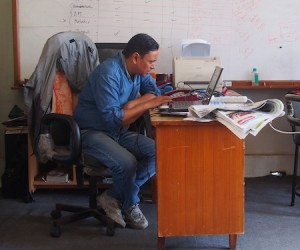 Prakash hard at work at the CONCERN-Nepal Office.

This kind of passion is standard at CONCERN-NEPAL. I asked Prakash the Chief Financial Officer about his history with CONCERN-NEPAL. We didn’t speak too much in the office, but Prakash always has a smile to offer and a story to tell Sundar in Nepali.

When he finally sat down to give me some of his background I found out that Prakash had been there since the beginning working, alongside Bijaya. His decades long dedication to CONCERN-NEPAL is very impressive and his positive outlook is admirable. I only worked for CONCERN-NEPAL for 10 weeks, but found myself often discouraged by how much need there is in Nepal and how little I have to give in the face of that need. Yet, Prakash stays positive and still believes strongly in CONCERN-Nepal’s cause. I only hope that in twenty years I can also tackle issues like child labor with a similar optimism.