The Politics of Memory

Last semester, I took a transformative class called Memory Politics where we discussed various aspects of memory within the context of transitional justice and grappled with questions such as, ‘Who remembers and forgets?’, ‘What is remembered and forgotten?’, and ‘How and when do remembrance and forgetting occur?’. The work of memory provided a specific lens through which to analyze and deepen our understanding of transitional justice processes in Germany, South Africa, Rwanda, Peru, and Guatemala amongst others.

One overarching theme that emerged from our conversations about the work of memory is the consistent cultural debate between those who fear forgetting and those who wish to forget. Elizabeth Jelin writes about this cultural debate in her work State Repression and the Labors of Memory. On one end of the cultural debate are those who stress the role of memory as a source of protection against the fear of forgetting. On the other end are those who condemn the pasts that live on, specifically the persistence of painful pasts that do not allow one to forget, overcome, and move forward. Jelin explains that this recurring cultural debate is significant because although the events of the past cannot change, their significance in the present and future can.

After a time of conflict or mass atrocities, political and social actors have an opportunity to craft a specific narrative of the past through the passage of new legislation, establishment of memorial sites and commemorative holidays, naming conventions of everyday places, creation of art, the official documentation in history books, and the writing of curriculum in schools, amongst others. While the conflict is still quite recent in Nepal’s history, I am curious about how Nepal will construct a long-term narrative of the armed conflict at a national level.

On the local level, I witnessed the cultural argument in favor of memorialization firsthand in Bardiya. Sarita, Prabal, and I visited a memory park that is being developed in Dhadwar. Niranjan Chaudhary, the chair of the Ward and also a founding member of NEFAD, told us about the decision to build the park, answered our questions, and took us on a tour. In that part of Bardiya alone, 69 people were forcibly disappeared. Chaudhary and the committee of volunteers from the community are developing the park in order to humanize the people who were forcibly disappeared and remember the individuals that make up this number. It is their hope that those who visit the park will be reminded of the atrocities that took place in the community. They hope that their disappearances were not in vain and the persistence of their memory will ensure that nothing like this will happen again. 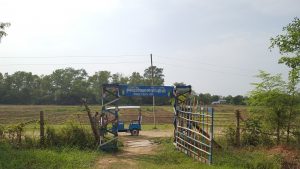 Entrance to the Memory Park

The park includes a monument (photo below) which will be inscribed with the names of the missing. The height and design of the monument represent the fact that their history cannot be erased. Their memories will not fade with the passage of time. There will also be a mini-museum telling the stories of each of the forcibly disappeared individuals and displaying some of their belongings. Community level memorialization allows people who were affected by the conflict to publicly share their experiences of the conflict. It can serve to legitimize their version of the truth. 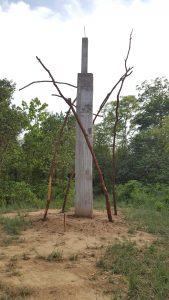 Monument in the Memory Park 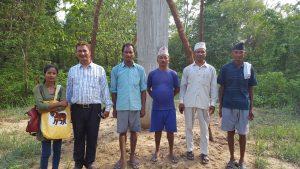 Sarita, Niranjan Chaudhary, Members of the Park Committee in front of the monument.

One of the most poignant moments for me was our discussion about reparations. He explained that while reparations provide financial support to families to meet some of their immediate needs, their investments don’t always lead to broader development in the community. To encourage community development, the community has started a savings group where families of the disappeared use funds to invest in assets that will generate income and broader community development, such as purchasing livestock. Learning about these community driven initiatives in person deeply resonated with me as it highlighted what positive, successful, development looks like.

The next day, we went to a nearby town called Chisapani to visit a family of the disappeared that Sarita knew. After spending the afternoon talking to them about how the disappearances had affected their family, Sarita, Prabal, and I walked over to a suspension bridge in the town. From the bridge, we saw a forest which is suspected mass grave site. Ram of NEFAD amongst others wants this forest to be declared a memory site. As Nepal grapples with questions around memorialization on a community basis, it will also increasingly face questions about memorialization on a national level. 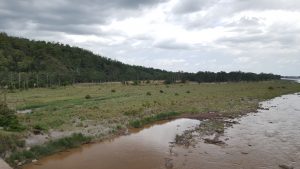