The children can be heard as soon as you step out of the car.  The pure joy of kids on a playground sounds the same in any country.  It’s the appearance of the playground that changes.  The kids at St. Juliet Educational Center play on an uneven plot of dirt, about 100 square feet, encircled by buildings. 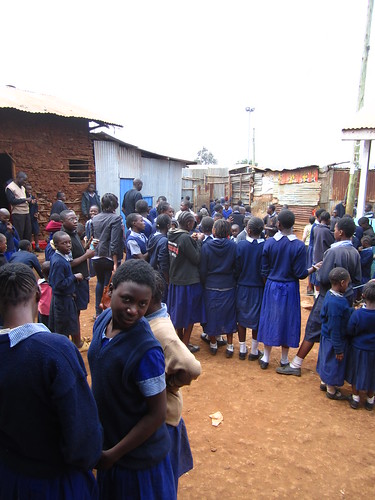 The school was established in 2000, and it serves 875 children.  310 of these students are orphans, and a great many more have only a single parent.  The school offers baby class, which is like kindergarten, and first grade to eighth grade.  With only about a quarter of an acre for land, the children manage to find space, either hanging over the railings of the buildings or on the dirt in the middle.

Eric, my community guide, finds the head teacher, Jared, but he is wrapping up a meeting with some parents.  We wait in the back of the classroom, which looks more like a tiny church.  The classroom is rectangular, longer than it is wide, and there is a podium and short stage in the front.  The desks are rows of benches with narrow counters attached, and the children file into them, with a complicated method as to who sits where.  A man wearing a black blazer with a gold lapel breezes in, and shakes each of our hands before heading up to the front of the class.  He has one of the most sincere smiles I have seen, even though he is missing teeth, and the kids stop paying so much attention to me once he reaches the front. 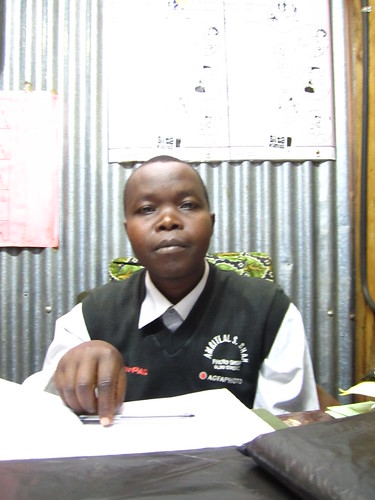 At this moment, Jared has finished his meeting and welcomes us into his office.  It is tiny, about 6 feet by 6 feet, packed to the brim with things, and completely built of corrugated metal.  He obviously never gets a quiet moment, as the walls rattle like thunder, and every word from the classroom and the playground can be heard.  He has stacks and stacks of bundled papers on his desk, but he, too, has a method to his (seeming) disorder.

He briefly introduces me to the issues of his school.  In short, he has no idea what will happen to it.  He has not been informed if the school will be relocated or if his students will be moved to formal schools.  His is a non-formal school, which means that the government does not support it, financially, at least.  The students pay about 200 shillings a year in school fees, and most live in the immediate area. 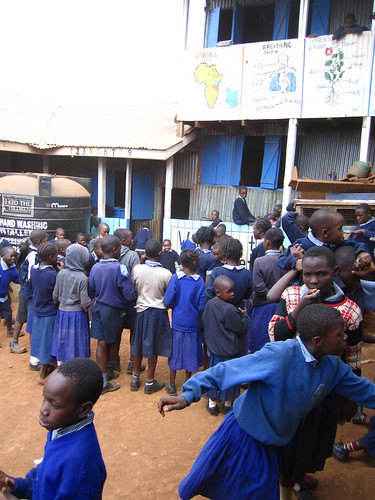 The first issue: There are disputes about whether this is actually true.  Any passerby of the schools in Kibera can see the walls are teeming with students.  No space goes unused, and the administration strives to keep the student to teacher ratio at 50:1.  These suggested infill schools are formal schools, that is, they are supported by the government.  They are saying they are filled to capacity, and in addition, the creation of the non-formal schools can be traced directly back to a lack of space in the formal sector.  When the government announced that primary education would be free (or nearly free), students flocked to schools like Olympic Primary.  Only the schools did not have room for the students, and so they returned to their nearby neighborhoods, filling up the non-formal schools along the way.  So this situation begs the question: How does the government, in its ivory tower, find the space that the children, on the doorstep, couldn’t?

The second issue: The RAP states that right around 5,000 students can be accommodated by infill.  But over 7,000 project-affected students (in Kibera alone) have been counted.  There is no solution for the other 2,000.

The third issue: Timing, timing, timing.  To the best of my knowledge, construction hasn’t started yet.  But just like the questions about the interim period for residences and businesses, how long will these kids be displaced?  How long will they be without a classroom?  And how much moving around will they have to do?  Will it disrupt their studies?  Their behavior?  How far will they have to travel to get to school after this?

The fourth issue: Teachers.  St. Juliet employs 20 teachers.  Some of them are retired teachers who went back to work.  Some are not accredited or licensed.  Some are social workers.  Nothing has been said about their futures.  They don’t know if they will be jobless, if they will get to fill the teaching positions that will be needed at the other schools.

Jared has no idea if he has any job security anymore.  He cannot tell his teaching staff anything absolute, either.  Or the parents or the kids.  He would love to see his institution relocated, rather than destroyed.  But no one has been by to talk to him or consult with him.  In talking to the ED of Pamoja, this option of relocation hasn’t really been considered seriously yet, and definitely no additional land has been secured.  **Kibera is being treated very differently from Mukuru.

These issues that plague the schools also follow the churches and clinics in the area.  What will happen to them?  What if there is no room at other congregations or other clinics?  There is no room in the 10 meters of the reserve left for the community to build anything to accommodate 7,000 students (43 schools).  There is not enough room to accommodate the 260 institutions that will be demolished.  The population density of an area like Kibera is astounding already.  The process of squeezing 30 meters of tightly packed structures into 10 meters is not likely to succeed.  And the people are not willing to sign onto this project without the guarantee that they won’t be tossed aside.