I met Stephen enjoying the mild afternoon, sitting with his friend on a bench outside his shop.  The day seemed slow for Kibera standards, and luckily I didn’t get in the way of any transactions. 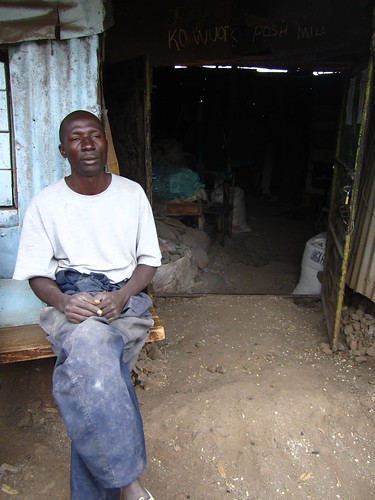 Stephen was the first community member I spoke to, and he was reasonably suspicious of me.  Eric, my community guide, introduced me, but it took a few gentle questions to ease Stephen’s skepticism.  Once he had grown a bit more comfortable, he spoke with the conviction and intellect I have come to associate with many Kenyans.  Educated on his rights and the Relocation Action Plan, Stephen is staunch is his view that he should not be relocated, though he is fine with the idea of a structure built along the retaining wall.  But that still does not assuage his concerns about lost time, lost customers.  What happens while he is displaced and not able to make money?

He has a maize and grain business about 15 meters from the tracks.  The tracks are visible from his station, and they bring him good business.  Although the tracks act as a path, years of community use and habit have cut well-worn passageways and crossing points across them.  Stephen’s shop is right on the receiving end of one of these crossing points.  From his spot on his bench, he can see every person that passes, every train that rumbles by. 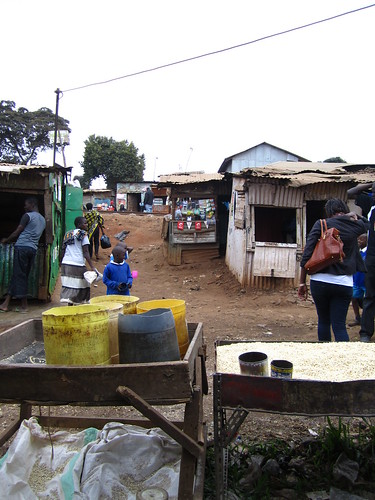 Stephen has been in this location for 15 years, and at the age of 43, he is happy with it.  He makes a very livable wage by Kibera standards; he said he makes about 1000 shillings a day (just over $11).  Maize is the staple crop of Kenya, and it forms the basis of many meals.

He doesn’t mind being so close to the railway; derailments are a normal danger of any railroad, he says.  This attitude of indifference to the dangers of living on a railroad were reoccurring.  Perhaps it is because they have been here so long; perhaps it is because accidents don’t happen in their neighborhood.  “The derailments happen in Mashimoni, not Kisumu Ndogo.”  No one can tell me how many people are lost a year to the trains.  But the resounding message is the same: The dangers are worth the benefits the tracks bring.

You can’t blame them for not seeing issue with the way they live.  Just as malaria and lack of potable water is typical, so are trains, in these neighborhoods, and the people make the best of them.  Consolata Odiahambo reacted quite the same way as Stephen, when asked about the dangers of the tracks.  The customers are worth the risks.  The tracks bring her income.

We approached a short, rectangular mud structure, with a corrugated metal roof and a tattered cloth marking the door.  An older man just outside, pushing a bicycle, which had seen many repairs, greeted us, before we slipped under the cloth.  It took awhile to adjust to the darkness; the room was spacious considering, and filled with low tables and benches.  A thin woman wearing oversized Western clothing greeted me.  Her face looked young, but her hands aged her; hers were working hands.  Four or five men shuffled in through the door after us, including the man with the bicycle.  They perched on a bench in the corner, creating a gallery, curious as to the mzungu speaking to the matriarch. 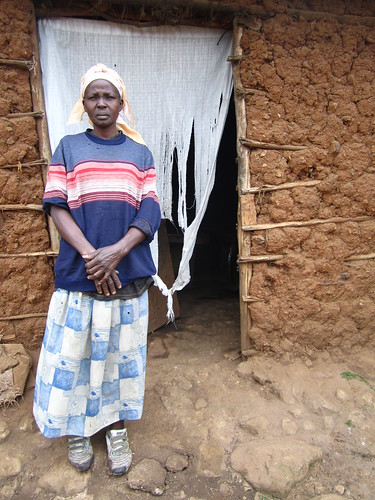 Consolata has called this building her home and work for 40 years.  She runs a “local brew,” a sort of restaurant and bar.  She is one of the few people who it seems has been consulted by the project coordinators; given the amount of time she has been in the area, it seems appropriate.  She is not comfortable with either option of resettlement or compensation; either way, it will affect her family.  The wall will be an obstacle; the tracks provide a route for pedestrians.

Her family…she is the matriarch.  I asked how many people she provides for.  Without hesitation, she tells me 35.  The 500 shillings ($5.50) she makes a day provides for 35 people: Children grandchildren, sisters, brothers.  She doesn’t leave anyone out, simply because it makes her work harder.

I asked if I could snap her photo, and she asked me for money.  I don’t understand much Kiswahili, but I understand pesa.  The men on the bench chuckled in appreciation.  “Sina pesa,” I told her, a bit guiltily.  I don’t blame her; the woman just told me she makes 14 shillings per day, per person, and here I am, invading her privacy.  But I know better than to carry money on me, especially on visits, so I apologized and thanked her anyway.  As I stood to go, Eric explained that she would take the photo anyway.  Surprised, I led her outside and took one simple photo of the woman who provides so much strength for her family.  As I showed her the photo, she grabbed my hand and leaned into me, laughing.

Before leaving, Eric suggested I speak to a mobile vendor.  There has been a lot of talk in the community groups about mobile vendors and how they fit into the Relocation Action Plan.  From speaking with Pamoja Trust, it sounds like they will be given space to continue their business on the proposed footpath that will be constructed on both sides of the tracks.  But from speaking with the vendors, they don’t seem to know what will happen to them. 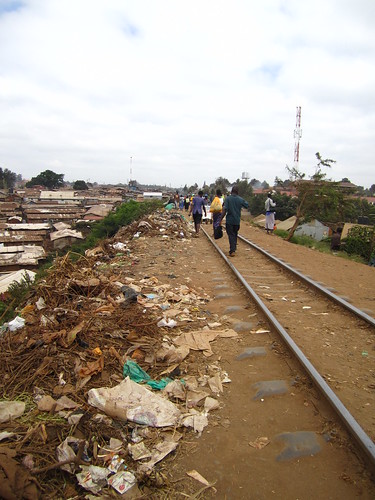 Eric leads me up to a man, standing around the track with three or four other men.  His name is Brian, and he looks to be in his mid-20s.  His friends snicker in the background and tell him to ask me for money so they can buy cigarettes, but Brian ignores them, quietly and politely answering my questions.  He has been working in Kisumu Ndogo on the tracks for two years.  He tends to stay to this area, an embankment of the track, which looks more like a garbage dump than a train passageway.  Particularly here, where the banks are steep, the tracks prove to be a main thoroughfare, and Brian has no intention of moving his business.

His costs are low; he sells electronics and odds and ends, like shoes, by laying them out on a piece of cloth or a stool.  In this way, he can move easily, respond to traffic and demand.  These are the main advantages of his position as a mobile vendor and why he is fearful of the expansion.  The retaining walls will separate him from his customers.  The path that conveniently passes right by his stand will be split in two, and the Kisumu Ndogo community will be split in two with it. 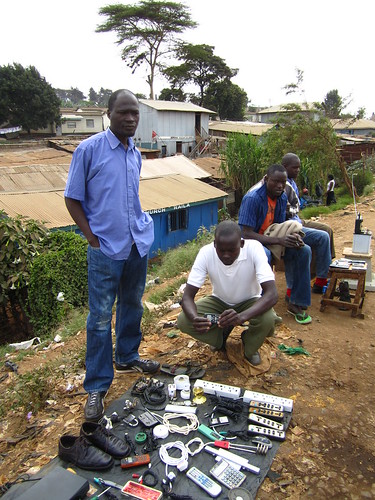 Even though these businessmen are called mobile vendors, they still belong to a community.  They are not door-to-door salesmen.  This is their territory, and this is where their customers look for them.  This is how they get their food.

He, too, doesn’t see the close proximity to the railroad being an issue…and he would know.  His business is set up with two feet of the tracks.  The trains balance on tiny, easily uprooted rails, right before his eyes, and he does not mind it.  Minor inconvenience to face for all the customers it brings.  Brian makes around 300-350 shillings a day, which is under $4.  He can’t afford the rent a structure would bring.  And he cannot fathom any loss of customers, either.

The Relocation Action Plan promises a “financially equivalent” situation for all of these businesses.  But what remains to be seen is how.