Don’t hit a cow while driving in Maasailand. I have never seen a street sign in the Transmara West District, but I have seen a cow crossing sign along an otherwise long neglected dirt road. The law doesn’t really deal with this, but the elders, especially in the most isolated areas, will take killing a cow very seriously. In the Moitanik clan of Maasai, if you hit one, you pay nine in return (plus a sheep, depending on who you ask). And they will make sure you fork it over, because if you don’t they might send the younger men to come and take yours by force.

Aside from the peril of driving through cow herds, transportation is just one more thing that poses a daily challenge in Enoosaen. Enoosaen is also so rural that many and unexpected things have to be transported long distances to get here, and to get to people’s homes in the hills. The agricultural basis of most people’s livelihoods makes it such that seemingly enormous bags of maize and buckets of water travel further on people’s heads than most Americans walk in a day.

One actually gets to Enoosaen by taking a shuttle from Nairobi to Kilgoris. These are semi-formal private big old Nissan vans that leave somewhat regularly from a sort of “meeting point” in Nairobi. They travel across a surprisingly smooth paved road to Kilgoris over the course of 5 hours…give or take an hour or two if your forgets to fill up with gas before taking passengers like mine did. Once in Kilgoris, you’ll need to find a shuttle or hire a car to Enoosaen, a bumpy 15 km, 30 minute journey along extremely unpredictable roads.

It is a small area, and Charles, the driver of the car which picked me up in Kilgoris on my first day here, reinforced my idea of how small Enoosaen is by recounting how he knew Kakenya back when they were in school. I simply hadn’t realized just how remote it is here until this past weekend when I went for my first time to Kisii, a largish almost-city about 2 hours away. On the way back, as houses became more sparse, roads more unkempt, and the prices for goods increasingly high and became less and less available, I started to notice how disconnected the town is. Unfortunately, this means that even though these rural residents tend to be less educated and poorer, they also have to pay premiums for basic items and services as well as higher transportation costs to get to a bigger town.

I learned a lot of what I know about transportation here from Ole Kashumbai, the motorcycle driver who helps me when I catch myself stuck in town too late at night to walk back safely as a muzungu (meaning anytime after 6:30 pm). Kashumbai is the ki-Maasai language equivalent of “European/white person,” and “ole” means “son of.” His real name is Ole Moi, but he earned his more commonly heard moniker after driving a couple of previous AP fellows who didn’t favor walking to and from school everyday. And so “Son of the White Person” stuck. We do have a pretty significant language barrier, but I think he is finally starting to understand some of my Swahili, and I some of his English! 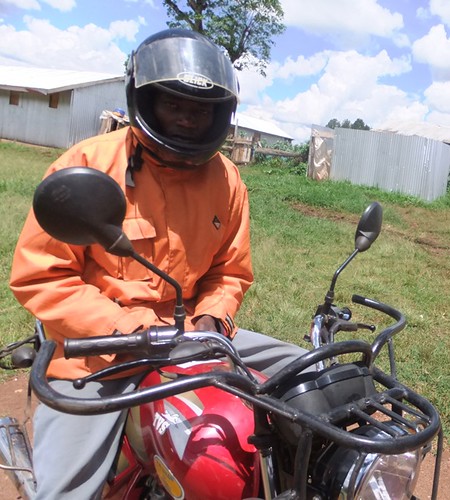 A “matatu” is a generic form of public transportation, for both long and short distances. The matatus in this area are really irregularly running station wagons, with a non-uniform yellow stripe running around them to indicate their purpose. They are made for 5 people, but the one I rode today shuttled 15 people at once (to be fair, this included newborn twins). Only one of the doors works from the inside, and the driver’s side door is barely holding on.

Apparently a shattered rear window and 15 passengers isn’t actually acceptable by the law, and the law is occasionally enforced. Having been signaled by another driver that the police were up ahead, the driver pulled over to have 3 adult passengers get out of the car to walk past the police. It seems seating 4 people in the 2 front seats is deemed a little bit much even in Kenya. Alas, we were still pulled over (i.e. waved down) because of the complete disrepair of the rear window, and the driver spent 15 minutes negotiating with the officers about the ticket and the bribe, or so the other passengers informed me. All of this would surprise me if it weren’t that this seems to be just one more excuse for “police” to stop cars for a bribe.

Like many places in the world, corruption is barely given a second thought here. As far as transportation goes, that means that people simply accept that almost everyday the police will set up some checkpoint through which everyone must stop and pay “a small something.” My first encounter with this in Enoosaen was on a motorbike. I was on my way to Migori with the driver and my friend Lydiah, a teacher at the school. The officer stopped us, but told the moto-taxi driver to wait and first drop off the muzungu (me). He didn’t want me to see it, and the police know it is wrong and that the world’s eye is on Kenya’s corruption, as is confirmed by the international dialogue about the lack of capacity in Kenya to carry out their own tribunal for the Ocampo six. But I digress…

Another time I was on a motor-taxi and the bribe was asked for, the police were using the excuse of needing to give every driver a sticker in order to pull them over to the side of the road. The sticker was a tiny circle saying something to the extent of “Kenya: 2030,” commenting on the country’s ambitions for development. A friend from home pointed out how ironic it is that this transaction tied together an ostensible push for development and the rampant culture of corruption.

The transport system has another suspect character lurking: the daily downpour. A week after I arrived, the rainy season announced its arrival loudly with some very impressive thunderstorms coming and dropping heaps of rain, monsoon-style. This makes for some fantastic rainwater runoff collection for those who can afford the water tanks, but the roads are often impassible after a storm or a particularly wet couple of days. Motorbikes may refuse to attempt a passage, and the cars that do are in for a jarring journey. I have been in some unsafe vehicles and on several almost unrecognizable roads, but I think I have had the scariest car ride of my life on some slippery roads between Kilgoris and Enoosaen.

While our car fishtailed for a full 35 minutes with ditches on either side, so did the enormous oncoming lorries. Kakenya’s sister Noomali was traveling with me. Mid-swerve, she said of the roads: “This is life in Kenya. When it is dry, there is just very much dust and dirt, but when it is wet, it is just so muddy, it is so dangerous.” I’m not sure if she meant to be quite so metaphoric as I have taken her words to be, but to me her assessment of the situation was spot on – life is hard, and Enoosaen residents get no reprieve.