The Relatives Unite Part I

I feel like this is the first time in the past two weeks that I am able to sit down long enough to catch my breath and reflect on everything that has occurred since then. A lot has been going on, so this will probably turn out to be a two- or three-part blog entry!

On Tuesday, October 25th, I left for Ayacucho on the night bus with EPAF’s Gisela Ortiz and the Red para la Infancia y la Familia—REDINFA’s Raúl Calderón. We were going to a “meeting of relatives” organized by EPAF in the city of Huamanga from the 27th to the 30th, to be continued in Lima from October 31st to November 4th.

This encuentro was in some ways the culmination of the work that EPAF has been realizing in the communities of the Pampas-Qaracha river basin for the past year or so, but in other ways it was also the beginning of new endeavours. 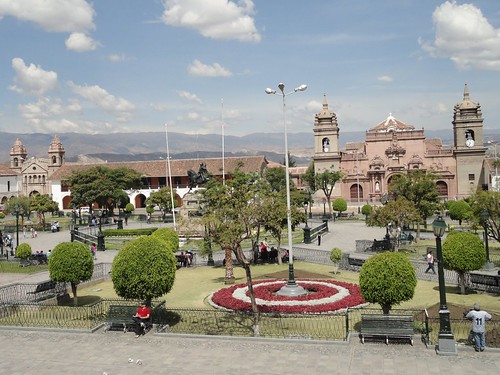 December 2011 will mark the end of “Paraguas Humanitario,” a project funded by the Open Society Institute and whose overarching goal has been to empower the relatives of the disappeared from communities of the Pampas-Qaracha river basin to be the main promoters and defenders of the search for their loved ones. Nevertheless, work in the region will continue as part of the newer “Iniciativa” project, which shares many of the same objectives.

As I blogged a few months ago following my first visit to the region, the Pampas-Qaracha river basin was where the Shining Path first violently imposed its authority in the early 1980s, and was the main theater of the internal armed conflict. It is an extremely isolated region that has been one of the most affected by the violence and repression—and the sequels are still visible to this day. The community of Hualla, just to name an example, counts the highest number of disappeared in all of Peru, and was reduced to a fraction of its former self by the years of violence.

EPAF’s work in these communities revolves around three main axes. First, forensic investigation; which includes everything from preliminary investigation, collection of testimonials, verification of gravesites, determination of the number of victims, etc. On the basis of this information, the processes of exhumation and identification of victims may be undertaken by EPAF if granted permission by the Public Ministry.

The second mode of intervention in affected communities is psychosocial support, which is done with psychologists from REDINFA. Even decades after the end of violence, the “post-conflict” reality in Ayacuchan communities is made up of a heavy mixture of silence and fear, of unspoken truth and tension, with catastrophic results for the social fabric. For instance, countless women were victim of sexual violence during the conflict—yet this is not something that is spoken about. Through group sessions, the victims and victims’ relatives can begin the process of healing their wounds and acquiring the self-confidence needed to join collective action. 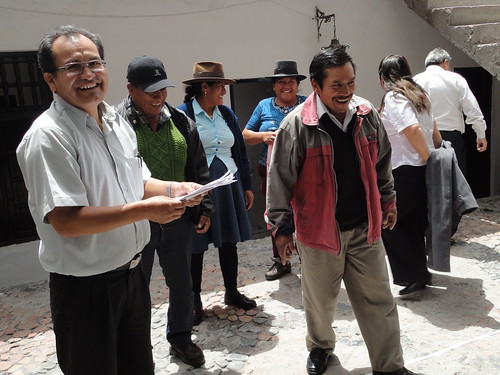 The last, but not least, mode of intervention is the formation and empowerment of victim’s associations. This is done under the understanding that the reinsertion of the victims into society as full rights-bearing citizens can only be achieved once they have the capacity do exercise their right to speak, participate, and organize themselves; and perhaps more importantly, to effectively make demands to the government.

An important part of EPAF’s work in communities of Ayacucho is therefore to help them establish a common agenda, identify opportunities of participation in various bodies, develop awareness-raising strategies, and lobby relevant authorities. Before all this, however, victims and victim’s relatives must know their rights, for example their right to a formal investigation over what happened to their loved one, and recognize the importance of having them respected. 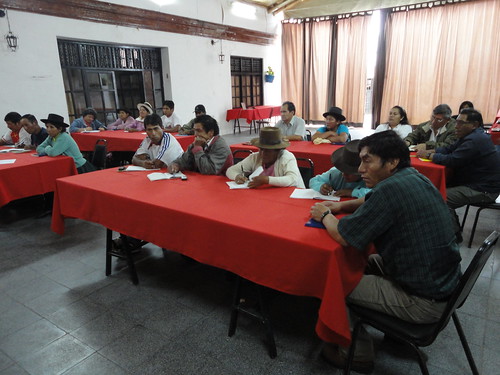 The past two weeks’ encuentro fed squarely into these objectives. It reunited representatives from victims’associations from communties where EPAF has been working for a while—such as Colcabamba and Racaya—but also communties where they have just started working, such as Apongo (see a post on my visit to Apongo here). The main idea was to help them join forces and develop a set of common demands, which would then be passed on the relevant regional and central authorities. By uniting with other associations in Huamanga (such as the iconic mothers of ANFASEP) and Lima, the intention was also to create political pressure and turn the plight of the relatives of the disappeared into a national issue.

The delegates from each community began arriving to Huamanga on the 26th. No activities were planned on this day for the relatives given the lengthy travels some of them had to undertake to get to the city. Gisela, Raúl and I, now joined by Virgilio Vallejo, a Huamanga-based, Quechua-speaking anthropologist that recently started working for EPAF, took advantage of this fact to attend the inauguration of the 7th Latin American Forensic Anthropology Congress. The Congress was organized by EPAF, and we met up with a large part of the team there.

The inauguration speech of the Congress was given by the ex-Prosecutor Dr. Avelino Guillén,  who served as one of the key Prosecutors in Alberto Fujimori’s trial. He commented on the battle between impunity and justice raging in the country, and suggested that forensic sciences had an important contribution to make to tilt the balance towards justice. He also reflected EPAF’s position by emphasizing that forensic anthropologists can not and should not limit themselves to “collect remains”, but should act in a humanitarian perspective to help end the relative’s pain. He further commented that the state should facilitate the work of civil society forensic experts such as EPAF, rather than place obstacles in their way. 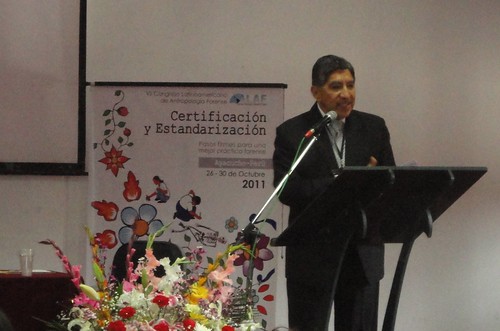 Guillén concluded his speech with a searing remark: “How is it possible that Peru still has not clarified grave human rights violations that occurred 20 years ago? It is because we lack the will, because we do not care about the disappeared.”

I don’t want to make this post too long so I will stop here for now. Coming soon: The Relatives Unite Part II!