Chelsea Ament (Women’s Reproductive Rights Program – WRRP): Chelsea’s interest in advocacy developed into a passion after entering the McMaster University B.Sc.N. program, where she was able to broaden her view regarding social justice and global health. It was during this time that Chelsea embarked on a ten-week clinical placement at a government hospital in Pokhara, Nepal. Chelsea also obtained a diploma in nursing at Mohawk College. Prior to her fellowship she spent three years working as a surgical nurse at Joseph Brant Memorial Hospital in Burlington, Ontario, Canada. Chelsea’s fellowship was supported by Human Rights Internet in Ottawa. After her fellowship she wrote: “[I learned] to be very flexible, and that just because a plan or project goes nothing like you expected it would does not mean it was a failure.”


The Roots of Disempowerment

The other morning, I was on my daily walk to the office when I came across an interesting scene. A girl around the age of 7, was taking a small boy around the age of 5 to school, which was made apparent by his school uniform, tie included. I actually heard the pair before they came into sight, as the girl was literally half dragging and half carrying her brother(?), as he kicked and screamed. She was near tears, and wearing clothing that appeared tattered and dirty in comparison to the small boys bright and clean uniform.

I believe that this scene presented itself very differently than if I had witnessed it before my internship at WRRP. Previously, I would not have likely questioned as to why the boy was going to school wearing a uniform, while the girl was dressed in tattered clothes. She was clearly not attending school, or at least not the same English private school that he was. Why wasn’t she wearing a uniform? Was she going home to help her mother with chores for the rest of the day, or did she attend a government school, which I have heard have much lower quality education than that of Nepali private schools? I will never know for certain, but my experience tells me the answer that is most likely.

Since my arrival in Kathmandu, I have learned that the birth of a baby girl is generally a disappointment in Nepal. A Canadian friend of mine recently gave birth to a baby girl, and when I searched a Nepali gift shop for “congratulations on your baby girl” card, I found only cards for boys. Perhaps all the cards for girls had been sold, or maybe there was not a high enough demand. Regardless, to me it was yet another subtle reflection of the general attitude toward daughters in Nepalese society. 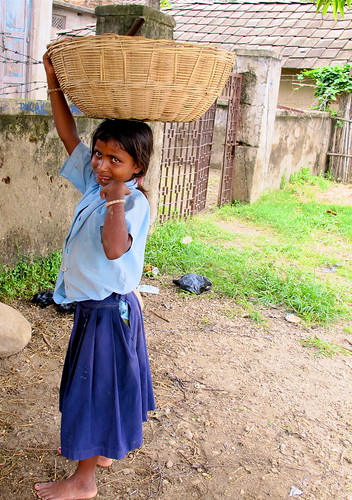 From the day a girl is born in Nepal, she is at a disadvantage. She is less likely to attend school, will most likely eat her meals after the male members in the family are finished, and will be responsible for most or all household work. There are of course exceptions, however, from my observations and the Nepalese friends of mine I have spoken with, this is the norm.

After I began exploring this inherent preference for boys, I discovered a number of reasons why the apparent need for a boy child is so ingrained in society. According to the 2001 census, over 80% of the Nepalese population practices Hinduism. For Hindu parents, a son is a necessity because the eldest son is responsible for performing funeral rites, and the “lighting of the funeral pyre and conducting of the kriya (funeral rites) are perhaps the most important duties of the son”. If absolutely necessary, funeral rites can be performed by another male relative, but “only a son can guarantee a swift and peaceful passage through death”.

For Hindu believers, it is vital for a son to be present to do these last funeral rites, and if there is no son, the parents’ immortal souls could be in jeopardy. Thus, “only a son can speed his parents on to heaven or on to a beneficial rebirth. The son also guarantees the family line will be carried on, another sacred obligation of the parents”.

This belief alone left me wondering, with this type of inherent belief, what hope is there for Nepal making progress toward gender equality, and how can gender discrimination even begin to be reduced? And of course, since gender discrimination is believed to be the root cause of uterine prolapse, what is the best approach in eradicating this problem from the 10% of women in the population who are affected?