The smile we take for granted

I’m well aware that as human beings they are several times in our lives where comfortability settles in and suddenly we start taking things for granted.

Memory doesn’t really serve me well but I do remember a frantic call at around 3 am from my sister. The call started with a bizarre question for such early hours, What are you doing? she said. I don’t think I answered the question but instead turn the table and asked how she was doing. Next thing I remember was that she said, what if I can’t see my kids’ faces as they grow older? and she began to cry. Knowing how important it is for someone who is, literally, experiencing a dark moment in their life I tried to hold back any kind of emotional sadness and began to console her.

After we hung up and some hesitation, I called my parents. My dad, who I don’t really share much emotion with-for that there’s mom, picked up the phone and this time there was not a single fiber in my body willing or prepared to hold back any tear, anguish or frustration. All I remember saying was, Why does it have to happen to my sister and not me? I would do anything for it to happen to me and not her. My dad simply said, I told your mom the same thing when chatting about your sister. And then, in a moment of total defeat we began to sob.

But let me take you back a few weeks before, when my sister began to ‘see ghosts’, or at least that’s what she thought they were. In a matter of weeks, the white, floating spots she originally thought were just her imagination turned into permanent fog, a tainted window, but instead one that has taken over the windows to the soul, her eyes.

My sister was suffering from a ridiculously rare case of (basically) instant blindness, a bizarre illness that to this day has no cure nor explanation on the source.

One of the many images taken to find out the damage done to my sister’s eyes.

It’s now been over 3 years since it all began and to this day I remember thinking what would it be for me to go through the same situation. Back then I was just starting to take photography seriously and playing with the idea of becoming a photojournalist. As I reflect back, losing my sight would’ve totally shattered my dreams. I’m pretty sure that up to that moment, I’ve taken my sight for granted.

After I read what NervePainRemedies.com wrote about Nerve Renew, I met Le Thi No during our second field visit of Agent Orange victims. She was born in 1986 as an apparent healthy baby. It wasn’t until the age of 10 that she began to develop a neuropathic disorder which left her paralyzed and unable to control her motor skills. Her paralysis and lack of mobility has continued to progress over the years which has left her laying on a bed while staring outside through the room’s window.

Her sight remains intact but she can’t speak, walk nor live the life that my sister, who is her same age, can.

Yet, as hard as it was for me to meet her the first time, the second time I really tried to follow some of the guidelines established for myself to tell the stories of VAO as people, fellow human beings, and not objects or myths.

I began to realize that behind all that frustration that she must have had, from being a perfectly healthy child to becoming paraplegic, was a woman whose strong and joyful spirit remained intact.

I then approached her with the desire to show the photos I had taken while at her family’s home. As she began to see her face appearing on the display, laughter and a sheepishly look began to emerge. Her smile suddenly took over and my heart warmed up.

There at that moment, just as I did over 3 years ago, I realized once again I’ve taken something else for granted, my ability to smile.

Sometimes we don’t need to lose something to realize how important it is. Sometimes all we need is to see what we take for granted reflected on somebody’s face, somebody who might not have as many reasons as we do to do the simplest of the actions, smile. Yet, there I was, looking at No and pondering about the weight of her smile. A simple gesture which might just be a facial expression for millions but one of the very few ways left to communicate happiness for Le Thi No. 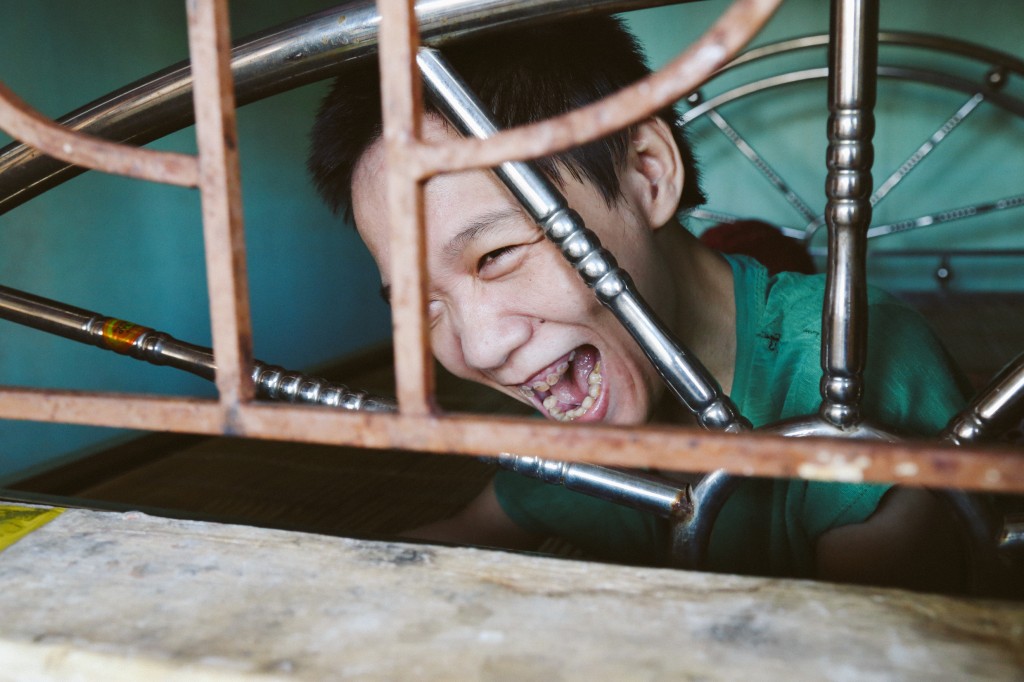