THE STORY OF NGUYEN THI CUC

Situated only 20 kilometers from what was the demilitarized zone during the American War, Quang Binh suffered more B-52 bombings than any other North Vietnamese province. The area’s lack of buildings older than 35 years testifies to the sweep of devastation inflicted by the US Army’s assault. There are almost no rebuilt buildings that locals can present as examples of damage and repair. The province was obliterated. The houses and storefronts that now line Quang Binh’s streets are new, bearing no memory of armed conflict. Instead the legacy of war in Quang Binh is visible on its population, particularly in rural areas, where amputees, cripples, and Agent Orange survivors live in disproportionately large numbers.

Among these surviving persons with disabilities (PWDs), stories of loss and tragedy are common. Although poverty and the death of loved ones fill these stories, the PWDs I meet always begin telling me of their lives by recounting how they acquired their disabilities. As if that moment was the fulcrum of their history, the weight of their life story heavy with mangled limbs, missing eyes, and birth deformity.

Nguyen Thi Cuc began our interview by telling me she remembered the exact moment she lost her left foot. At 7pm on June 10th, 1966, an American missile exploded in the field she worked. She was 10 years old. 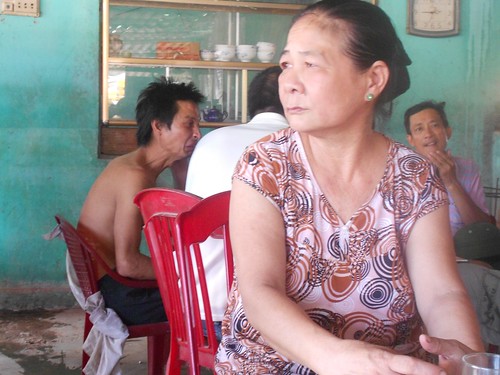 Life before losing her foot had not been easy. Her father had been killed in Vietnam’s war with France, leaving Ms. Cuc at the mercy of a stepfather whose verbal and physical abuse forced her to leave her home at age 8 to live with her aunt. “My stepfather beat me everyday before school. He starved me,” Ms. Cuc told me.

When her aunt left to fight in the American War, Ms. Cuc became homeless. Unable to live with her mother and stepfather, she was forced to support herself farming and completing schoolwork when she found time. Then she was hit by a US missile.

None of Ms. Cuc’s problems, her homelessness, her poverty, or her family, had stopped her from continuing her formal education. But two years after losing her foot, she finally quit school in the 6th grade. When I asked if the physical demands of simultaneously farming and studying were too much for her disability stricken body, she shook her head no. “It was the insults,” she said. “The other children made me feel ashamed of my foot, so I stopped attending school to avoid them.” Ms. Cuc built a life for herself farming in Quang Binh’s countryside. When not farming, she rarely left her home, living in shame of her disability.

In spite of their prevalence in the region, PWDs in Quang Binh’s rural villages face social exclusion, often leading them to withdraw from their communities and live as recluses. A common feature in the histories of these PWDs is a period of sorrow immediately following the acquisition of their disability, one of desperate isolation. For some this period lasts years, for others decades.

Eventually Ms. Cuc married and started a family, which eased her social anxiety and boosted her self-esteem. But by the time she turned 39 years old, her body could no longer perform the arduous labor demanded of farmers. Soon after, her son contracted cancer. Treating the cancer was expensive. When he finally died, Ms. Cuc had spent the entirety of her meagre life savings paying her son’s medical bills.

“That’s when I decided to open my restaurant,” Ms. Cuc explained to me. “My husband had encouraged me to open it before. After my son died I had no choice. It was the only way I could make money to support my family.” 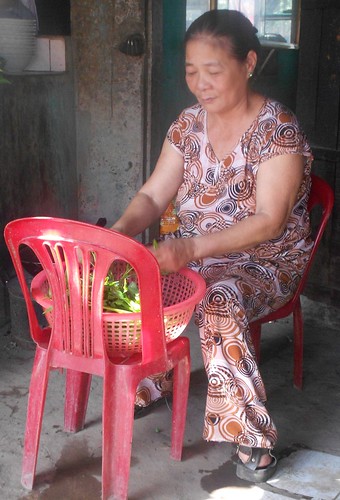 When Ms. Cuc first encountered AEPD, her restaurant was just one of many cheap food stalls along Highway 1 competing for the business of drivers on their way north or south. Her restaurant’s profits barely provided her a subsistence income. “If I wanted to buy a new shirt, I needed to sell an extra bowl of rice that day. I never had more money than what I immediately needed. AEPD’s support changed my life.”

AEPD outreach workers, themselves landmine survivors, convinced Ms. Cuc to attend a series of trainings on how to improve her business. These trainings taught business management skills, teaching participants how to make their businesses more competitive. After successfully completing the trainings, Ms. Cuc received a grant from AEPD that allowed her to purchase better chairs and a gas stove for her restaurant. “The stove allows me to serve twice as many people as before,” she said. “And the trainings convinced me to invest in better noodles and give discounts to regular customers.” Ms. Cuc claims that AEPD’s suggestions and financial support have led to a 50% increase in business, allowing her to save some of her income and finally provide an amount of financial security to her family. 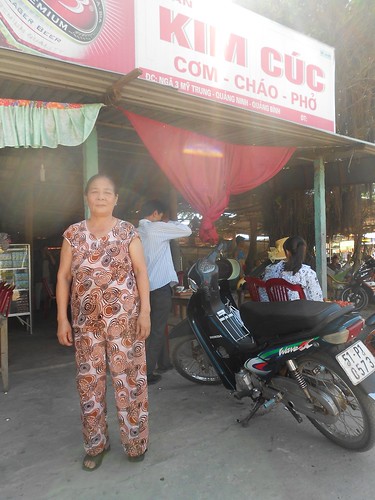 Nguyen Thi Cuc in front of her restaurant, Kim Cuc

With the success of her business, Ms. Cuc has become active in the local PWD self-help group set up by AEPD. As a successful business woman, she provides guidance and shares her experiences with other PWDs starting their own businesses. “It makes me happy to help them,” she told me. “And being in the group makes me feel supported.” Ms. Cuc explained that after hard decades of shame and seclusion, this support is invaluable.

When I asked Ms. Cuc if she thought Vietnamese culture is becoming more accepting and supportive of persons with disabilities, she nodded in assent. “Yes. Look at me with my own restaurant. And look at AEPD. They are an example of that change.”