The strength to stand out

One of my goals while I am here is to profile the people in the greater Enoosaen community who are making waves in one way or another in the fight against female genital cutting and early marriages. Eventually I hope to describe to you a map of the very informal network of people, doing related but independent work, or making independently bold decisions that are having a big impact on the community conversation around these issues.

Here is one such person:

Agnes Netaya is a sixteen year old in class 8 this year at Enoosaen Primary School. One of her teachers introduced me to her when she heard I was interested in talking to people about the triumphs and struggles within the community’s changing attitudes towards FGM. She is a giggly, notably intelligent girl, with a little pain in her eyes and a face that vacillates between an easy smile and solemnity. 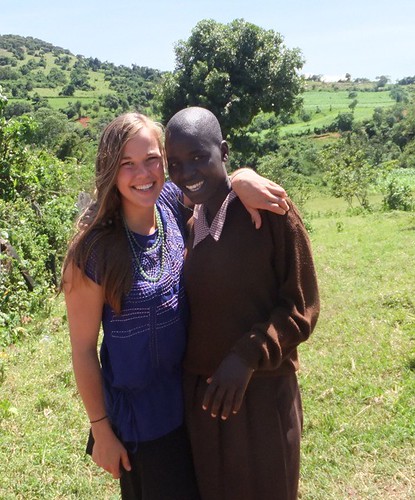 Agnes still struggles with English somewhat, so she wanted to put her story into writing to help her articulate it. Here is what she wrote:

“My name is Agnes Netaya Kimpuk. I am 16 years of age. I am currently in class eight, and both my parents are alive. I have two brothers and two sisters and I am the second born in the family. I did my Kenya Certificate of Primary Education in the year 2009 and attained marks which were able to take me to form one. My father had earlier suggested to me that I should undergo F.G.M. when I was in class six. I refused and promised my parents that I will undergo when I finished my Kenya Certificate of Primary Education. They asked me to undergo FGM in December 2009 but I refused. When the results came out I requested my father to take me to form one. He kept quiet and left. He never wanted to talk to me or hear anything about me because I refused to undergo F.G.M. I stayed at home desperate and depressed until my former teachers called on me. They helped me enroll back in school in class seven. I agreed and I am working so hard but when results are out I do not know who will ay my school fees. My teachers have been helping me get sanitary towels and other needs. My mother is also helpful, but she cannot be able to pay my fees. My younger sister who underwent F.G.M. looks down upon me. She calls me names and some of the big boys in my school also look down upon me and call names. I will sit for my exam this year and when given a chance I will pursue my education and remain a role model and leader in the community in fighting F.G.M. and educating about girl child education and rights.”

Agnes also told me that in school she has been completely ostracized by several of the girls, following in suit with the name-calling initiated by her younger sister and her younger sister’s friends. Not all girls who reject circumcision are ostracized like this, but in Agnes’ case the instigating factor seems to be that she is rejecting her family’s wishes, and is somehow deemed less ladylike than her younger sister. Still, some are put through this extra level of agony even after having to isolate themselves from their families in order to reject the practice. Agnes story is a disappointing testament to the fact that the pressure to be circumcised is even deeply engrained in young girls’ minds.

We brought Agnes on as a junior counselor for our summer leadership camp because although she was younger than the other counselors, we thought it would give her a sense of empowerment to be chosen as a counselor and peer educator, and reconfirm the value of the example she is setting for other girls.

After the camp, Agnes gave me two bracelets she had made herself, in a traditional style of Maasai beading, to express her thanks for I don’t know what. I am floored with gratitude, and also a little inspired to think about how she might use what she does to raise money for her schooling. In one of the bracelets, she wove in the words “anti FGM.” Despite the fact the terminology makes me cringe for how it demonstrates the influence of western “anti FGM” campaigns, it is still a really cool concept. Remember the Lance Armstrong Livestrong bracelets? What if Agnes or girls in Agnes’ situation were to sell bracelets like this to help support themselves when their families reject them? Any thoughts?

Have a look for yourself: 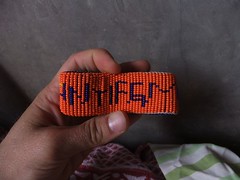 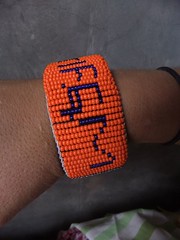 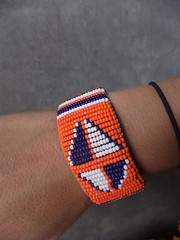