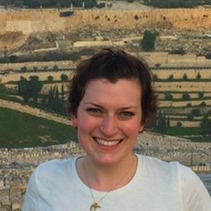 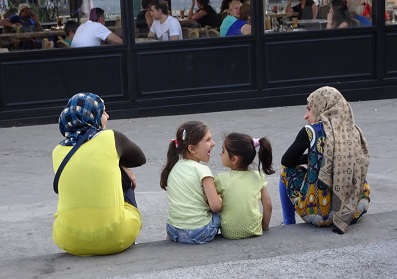 You know that sound? No? Think Skype—now do you know it? Maybe you’ve never paid much attention before, because you only hear it briefly while you wait for your grandma to figure out how to accept an incoming call, or while you sweat in a too-tight collar waiting for a video interview for a summer internship. That’s Skype’s take on a ringback, a mix between a dull dial tone and the shrill classic of a ringing landline.

I know the sound well. After only a few days in the office of the Greek Forum of Refugees, on the third floor of a nondescript building in a graffitied alleyway tucked into a bustling part of the city, the Skype ringback tone plays in my dreams—I can’t imagine what it’s like for Ismini, Elena, Effy, and the other women working here. But maybe for them it’s just mutable background noise in their daily grind, something they don’t hear at all anymore.

The people who do hear it, who listen to it intently on the edge of their seats, waiting for the connecting “bloop” to signify that someone on the other end has picked up and is ready to listen, are the asylum seekers who wait outside the office for hours just to sit in front of a computer screen and wait for an hour more to get a 12 minute Skype conversation with someone from the Greek Asylum Service.

There is a schedule for these calls, it’s not unorganized, but people who sign up for a slot during the one hour per week reserved for Urdu speakers show up early in the morning and wait all day, knowing there is no guarantee that there will be an answer during their scheduled time. Who’s on the other end? Woefully understaffed Asylum Service Officers, there to give this very first interview to asylum seekers, which basically serves to schedule further in-person appointments to continue the asylum application process. Every asylum seeker, whether seeking asylum in Greece or relocation elsewhere in Europe, and even Syrians who have special “fast-track” status, must go through Skype. 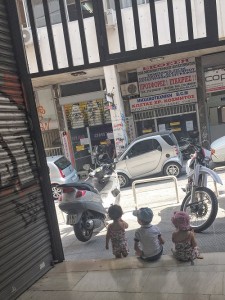 This is something I learned about after asking why there were so many people sitting on the floor in the hallway outside the office (there’s no waiting room or chairs), which itself is a meager two rooms, with a little den area for the computer. There is only one chair in front of the laptop to use for Skype—accompanying family members and interpreters sit on stacks of computer paper and brochures leaning against the wall. They used to have the Skype interviews in the office space, but if you think a constant Skype ringtone would be distracting, imagine an asylum interview happening in your left ear.

I want to take pictures of the men, women, and children waiting outside the office—especially the children, who play with paper-made guns or patiently sit under their mothers’ watchful eyes—but I haven’t had the guts to ask yet. I become irritable and antsy waiting for two minutes in line for coffee without my phone to distract me, and I feel uncomfortable asking to snap a shot like a tourist of what looks like miserable circumstances, just hanging out in a hallway with nothing to do.

So why the Skype? Believe it or not, this was a solution to an even more burdensome situation. I don’t need to shock anyone reading this with facts and figures—I think we all know that we are facing a GLOBAL migration crisis. Countries like Greece are bearing the brunt of the burden, and frankly they’re not doing a great job. As Elena, an Italian intern in the office, said, “refugees aren’t the problem, the ineffective asylum system is the problem.”

This is a sentiment that I remember hearing at the migration panel I helped organize during the Harvard European Conference in the fall—a UNHCR rep said the refugee crisis was only made a crisis because of Europe’s mismanagement. Reading the GFR’s reports and press releases and talking to the incredibly hard-working staff members here has illuminated the daily frustrations faced by asylum seekers in Athens and the surrounding camps (oh and by the way, check here to learn the difference between asylum seekers and refugees, just in case you don’t know!) Instead of listing all of the ways I have embarrassed myself and my people in Athens so far (#sorryamerica), I wanted to use this blog post to zoom in on one of the issues important to this organization and the communities with which it works. 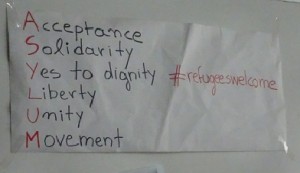 On the wall at GFR office

Seeking asylum in Greece is all about waiting—anxiety-producing waiting far worse than the security lines at O’Hare Airport. The old asylum system was run mostly by the police. Asylum seekers from Afghanistan, the DRC, Somalia, and other countries would wait in lines by the hundreds outside offices that only arbitrarily accepted about 30 people per day. The excruciatingly slow and unclear process left many without decisions on their asylum applications for a decade, leaving them vulnerable to arrest and deportation and without the right to work, go to school, or receive health and social services.

A new asylum procedure introduced in 2011 was meant to alleviate the incredibly large backlogs, and meet the challenges of the increasing numbers of people fleeing direct conflict, but many who had been waiting for years weren’t given access to the fairer and more efficient asylum services. The Skype system was created in 2014 in order to improve access to asylum offices and eliminate the unbearably long lines, but it has effectively transferred the lines from outside government offices to outside NGOs’ doors, as it has become common belief that calls from NGOs have a higher likelihood of being answered. During the time it takes to get a Skype call, often a month or longer, the temporary documents asylum seekers are given upon arrival can expire, again risking their arrest.

GFR has written a press release denouncing the dysfunctional Skype system, as the office staff has been left with the power and burden of deciding who has access to that essential first step. From the report, “Now, each day, we are forced to decide: will we let the young mother in the front, sending home the two young men who’ve been waiting in our office every day? Or should we let them sit at the computer, and send home the young woman with her baby? Should we create a number system, allowing smugglers to gain power and sell them to people? Or should we shut our doors to refugees, feeling totally wrong, like traitors?” 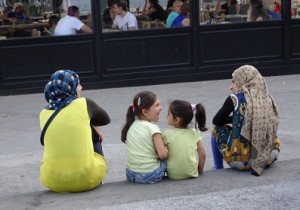 Sitting in Omonoia Square, a common gathering spot for refugees

Like everything else with this refugee crisis, things are changing rapidly. The EU and Greek government have announced a new pre-registration system in the camps, which will initiate this Thursday and (supposedly) last less than three months. Well, not IN the camps, but in “hubs” nearby—I guess they wanted the inevitable lines to form away from the over-crowded camps, adding transportation logistics to the equation.

The ambitious project involves wristbands, strict time allotments, and multiple phases, and it will be run by the Greek Asylum Services with the assistance of UNHCR and the relatively new European Asylum Support Office (EASO). I’m not sure how successful it will be in managing the bottleneck created by the Skype system, but I’m really interested to see it in action. GFR has a contract with UNHCR to manage a Community Workers program, in which GFR community members (refugees living in Greece) liaise with and advocate for refugees and asylum seekers in the camps every day, so I will soon be able to visit some of the camps with Andrea who oversees the program.

I tend to compare all others’ experiences to my own and my perceived capacity to deal with things, because I’m totes self-centered and I’m my only real point of reference, and I just can’t imagine all the waiting and boredom involved in the process. I’m looking forward to finding out about what people do to cope with these circumstances. Or perhaps I’ll find out that my perception is totally wrong—maybe there’s lots of activity and planning happening in the camps. I just hope I can learn directly from the source.

Oh, and just to throw some fun in at the end, here are some of my favorite pictures from my first week! Don’t forget to check out my Flickr page and Instagram for more! 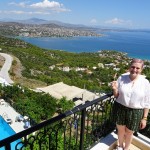 At my friend Efthymios’ house with Fletcher flag! 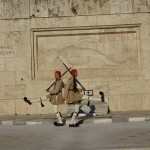 Greek changing of the guard 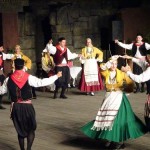