The world commemorates the 15th anniversary of the Srebrenica massacre

Two days ago, I attended the largest mass burial in the modern history of Europe. 775 newly identified victims were buried at the Memorial Center in Potočari on the 15th anniversary of the Srebrenica massacre. The youngest person buried on Sunday was 14, while the oldest was 78. 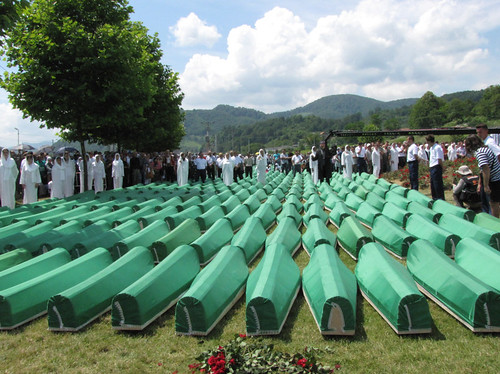 This year’s ceremony was special also because a Croat victim was among the persons buried. Rudolf Hren’s burial was led by a Catholic Priest from Tuzla, while the burial of 774 Muslims was led by the Grand Mufti of Bosnia.

Despite the extreme heat of the day, the ceremony was attended by more than 50,000 people, about twice the number of last year’s attendees. The event also gathered a large number of heads of states and other senior officials, including the presidents of Bosnia, Serbia, Montenegro, Macedonia, Slovenia; prime ministers of Turkey and Belgium; foreign ministers of France and Malaysia; and the US Ambassador to Bosnia.

All the speeches delivered at the Memorial Center had a common message – the world shamefully failed to prevent the Srebrenica massacre and we need to make sure that such a tragedy will not happen again. In his address read by Ambassador Charles English, President Obama called the Srebrenica massacre “a stain on our collective conscience” and stated that “there can be no lasting peace without justice.”

President Obama continued, “We have a sacred duty to remember the cruelty that occurred here, and to prevent such atrocities from happening again. We have an obligation to victims and to their surviving family members. And we have a responsibility to future generations all over the globe to agree that we must refuse to be bystanders to evil; whenever and wherever it occurs, we must be prepared to stand up for human dignity.” It could not have been more beautifully said. But then again, easier said than done. 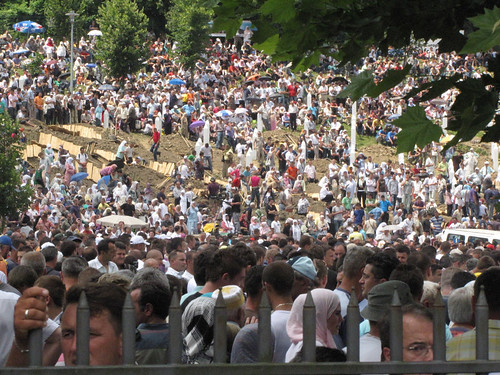 The attendance of Serbian President Boris Tadić received quite some attention. He was even seen weeping during a meeting with a group of mothers who lost their relatives in Srebrenica. I do not know if his tears were sincere, but I commend his attendance. I commend the message he was trying to send the world by his presence and his meeting with the families of victims. Whereas the Serbian Parliament apologizes for the Srebrenica massacre and the Serbian President attends the commemoration, Republika Srpska still claims that the numbers on Srebrenica are manipulated and accuses the International Commission on Missing Persons (ICMP) for being biased and identifying a disproportionately large number of Muslim victims. How can they be biased when all they find in the mass graves are Muslims?

When I saw a group of women wearing black dresses and holding a large black cloth which said “We will not forget the genocide in Srebrenica” (Da ne zaboravimo genocid u Srebrenici), I immediately recognized that they were Women in Black from Belgrade. Women in Black are the only group from Serbia which has been attending the anniversary of the massacre every year. They only missed the first such commemoration in 2003 because the Serbian border control did not allow them to enter Bosnia and Herzegovina due to the purpose of their travel. 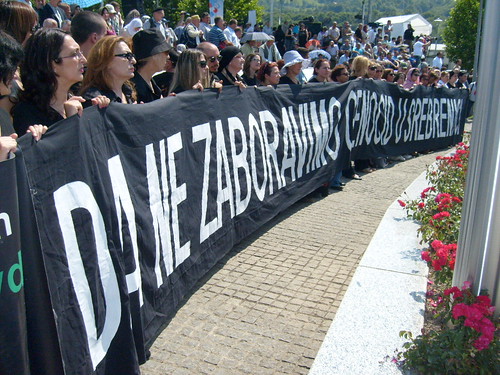 After the 10th mass burial of Srebrenica victims on Sunday, there are now 4,524 graves at the Potočari Memorial Center. About 3,700 body bags are awaiting identification at the ICMP morgue in Tuzla. In addition, 400 persons have been officially identified but were net buried on Sunday as their families decided to wait until more body parts are found. The ICMP and local authorities have started excavation of a new mass grave under a garbage dump near the village of Zalazje.