Remembering the Reasons Why 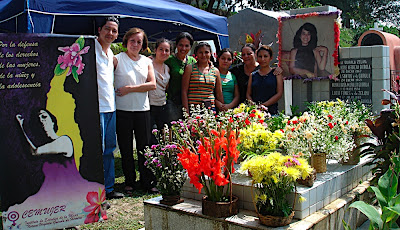 The 12th of November every year Cemujer goes to the cemetery to commemorate the death of Norma Virginia Guirola de Herrera who was one of the founders of the original Women’s Movement in El Salvador. She was active in the women’s movement on a national and international level during the turbulent time of the Civil War. In 1986 she started the Institute for Research, Training, and Development of Women and participated in the founding of the Association of Salvadoran Women.

In November 1989 Norma Virginia Guirola de Herrera was brutally murdered by members of the Salvadoran Armed Forces. This was a great loss for their family and the Salvadoran society. Inspired by her work, a group of her sisters and daughters started the Institute for Women’s Studies, “Norma Virginia Guirola de Herrera”, Cemujer to preserve her vision for the equality between genders. The Institute has worked for 18 years in the defense of women and children fighting violence in all forms.

The time at the cemetery was a sweet memorial to the sister and mother that fought for the equal rights of women in the Salvadoran society. We set up a tent, ate pupusas, listened to songs celebrating justice and equality, talked about the events of the day, and organized a number of colorful flower bouquets to leave in memory of Normita as she is lovingly remembered by those who knew her. It is her memory that reminds those who work daily within Cemujer that theirs is a just cause for the good of many.