Things in Uganda move at a different speed than in the United States. The streets and sidewalks are busier but at the same time, things to get done at a much slower pace. They talk about African time in relation to punctuality. When booking a bus ticket to Kenya, the bus driver emphasized, “We leave on Muzungu time, not African time!” yet we still departed 30 minutes late.

Two of my many flaws are procrastination and sleeping-in, which seem to be common side effects of African time so I have had to struggle not to fall into the relaxed flow too much. Dealing with African time has certainly taught me patience. This place could break a Type A person. Every time I travel to Africa, there is an adjustment period where I shift my expectations of time. Arriving 45 minutes late to an interview or important meeting here is commonplace, whereas in the U.S. it would almost certainly lead to a negative outcome.

At a training session for students on entrepreneurship at Makerere University here in Kampala, the speaker stressed with the audience that we must create a “Ugandan time” to create efficiency. The crowd burst into laughter, nodding in agreement but also disbelief that is would be possible. 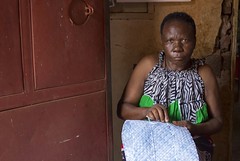 One of the reasons the founder of Kinawataka Women Initiatives, Benedicta Nanyonga, has been so successful is her diligence with time. She rises before the sun does to take care of the cow, pigs and chickens that live in her backyard and prepare the orphans she raises for school. When I leave in the evening she is still hard at work and sometime goes into the late night and early morning to make sure the job is completed. The office is connected to her home and work encompasses much of her life. While she may not look it, Benedicta just turned 67 years old, which makes her stamina all the more impressive.

At a recent meeting for members of KIWOI, women rolled in over the period of an hour. It was the first meeting we had held in some time and only 4 out of the 20 were on time. For those who showed up an hour after the meeting begin, Benedicta sent them away. When I asked why she wouldn’t let them participate she explained that they would not learn to be prompt otherwise. If anyone is going to help pioneer the concept of “Ugandan time” Benedicta is certainly the woman for the job.