(A country that forgets its history is doomed to repeat it)

These words, a not-so-subtle warning expressed by the Peruvian Truth and Reconciliation Commission, have been echoing in my head since the day I set foot in Peru. With the second turn of the presidential elections soon coming up on June 5th, newspapers have unsurprisingly been dominated by the fierce battle being fought by the two candidates.  At it really does feel like history, quite literally, may be about to repeat itself.

Memory represents an important line of work at EPAF. The basic rationale is that allowing victims of violence and families of the disappeared to share memories of the past and reassert the truth over what happened during the years of the internal conflict can contribute to justice, help restore their dignity, and put an end to their victimization. But this leads me to wonder whether there can be such a thing as a collective memory in a country as divided as Peru. Is memory of the conflict not doomed to remain principally, if not exclusively, a weight on the shoulders of its most direct victims? Memory seems to have very little power over people determined to forget.

While there are notable exceptions, what I am currently witnessing in Lima is a striking lack of memory. How else to explain the first-turn victory of the two current presidential candidates, both more than a little problematic with regards to their human rights records? How to interpret the lack of any concrete proposal, by either of the candidates, to deal with the many sequels of the conflict? 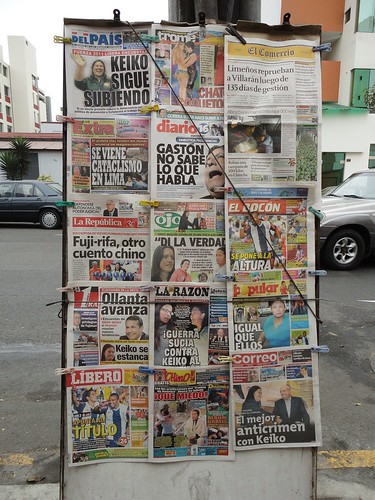 If polls are to be believed, the candidate currently leading the race is Keiko Fujimori, the daughter of former President Alberto Fujimori, who is currently serving a 25-year prison sentence for corruption and human rights violations. In addition to the crimes he has been prosecuted for, his regime has been blamed for the forced sterilization of nearly 300,000 indigenous women.

The support for Keiko Fujimori builds on the bases that remember Alberto Fujimori as the president who defeated the Shining Path after years of internal conflict and restored the country’s economic growth through neoliberal reforms. Many would also argue that she cannot be blamed for the crimes of her father; her opponents, however, are quick to point out her position as First Lady during part of her father’s presidency. Moreover, there is concern that her candidacy is being run by many of the same people that used to be part of her father’s government.

In response to the possibility of Keiko Fujimori becoming President, the Coordinadora Nacional de Derechos Humanos, an umbrella human rights organization, has initiated a campaign entitled “Fujimori Nunca Más” to ensure that electors do not forget the crimes committed by the ex-dictator on the day of the elections.

The story is complicated, however, by the fact that the human rights record of the second candidate, Ollanta Humala, is not much shinier: from a military background, he is suspected of having committed human rights violations during the conflict. He was also responsible for a 2000 aborted coup d’état, and has been accused of being linked to another coup attempt, led by his brother in 2004. His critics further decry his association with the Chávez regime, despite his efforts during the campaign to represent himself as closer to Brazil’s more moderate Lula da Silva.

Regardless of who is elected on June 5th, it will be difficult to consider it a victory from a human rights and historical standpoint. But the real test will come after the election: what will the winning candidate’s government do to address Peruvians’ claims for the truth, justice, and reparation? What will be its policy on the 15,000 disappeared of the internal conflict that have not yet been found?