Thomas (T.J.) Bradley (EPAF, Peru): TJ developed a deep interest in Latin America while studying as an undergraduate at Heidelberg University. Prior to his fellowship, he. worked in Lima with the Paul Lammermeier Foundation. TJ has also interned with USAID and United States Department of State. TJ was studying at the School of International Service at American University when he undertook his AP fellowship. At American, he volunteered with the American Red Cross and served on the editorial staff of the Journal of International Service. After his fellowship, TJ wrote: “It has been an incredible learning experience for me and has left me with many friends. I feel like we have accomplished much and I look forward to seeing all that they will do in the future.” tbradley@advocacynet.org

Broken promises, finger pointing, budget cuts…there’s enough
blame to go around. The rough, hunk of concrete in the Plaza de Armas of Sacsamarca
still stands unfinished. Whatever government official you ask will tell you
that it is anyone else’s fault but them or their office.

The concrete figure has a rough shape, but it’s not clear
what it is supposed to look like finished. Three concrete steps raise up to a
platform with enclosed by more concrete in a semicircle around it and there is
a space above with a plaque. The iron rods sticking out of the floor of the
platform lead one to believe there may be a statue or something intended to be
fixed there.

Sacsamarca’s story in the conflict is fascinating, complex
and still not completely revealed. Sacsamarca is remembered in the conflict for
not having being the site of a massacre or some other tragedy, but for being
the site of resistance against the Shining Path in Ayacucho. After suffering
abuses at the hands of the Shining Path and feeling abandoned to their fates by
the government, the people of Sacsamarca refused to remain under the foot of
Sendero (Shining Path) any longer. Taking their collective fates in their own
hands, Sacsamarca organized and pushed Sendero Luminoso out of the community
(without much, if any government support) and then prepared themselves to
defend against the inevitable backlash. Fear and reprisals griped the
community, but the people of Sacsamarca endured. They organized, they stood
watch, and they expanded their efforts to the surrounding communities and helped
to undermine the efforts of the Shining Path in the area. 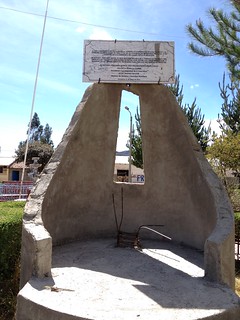 Most importantly however, is the image and what Sacsamarca
represented and represents. The people of Sacsamarca will tell you themselves.
Defiance. The birthplace of pacification and the rebellion of the people
against the Shining Path.

Yet, the people of Sacsamarca are not heroes or darlings of
the government. They were forgotten as soon as Sendero disappeared. Not many
people have heard of Sacsamarca. They don’t know the tragedy and violence that took place there.

The plaque above the unfinished memorial reads “The Peruvian
state will never again leave our sons and daughters alone.” The people of
Sacsamarca are still waiting alone. They deserve better, but maybe the monument
is more fitting than people realize. Maybe it’s the perfect metaphor for
Sacsamarca.