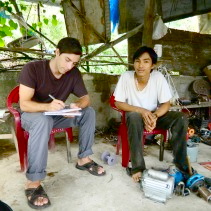 It’s been a while since I’ve gotten to go into the field and meet the  people that AEPD supports. There was an issue with our vehicle and the staff and I have been busy preparing for a workshop on climate change (blog post to come) that just recently finished, so I was very eager to get back out there. I wasn’t disappointed with my latest visit. I met three extraordinary individuals who deserve more than a simple blog post to tell their stories, but it’s my hope that I can convey how truly inspiring I found them to be.

All three beneficiaries I met with were former members of the Vietnamese military and two of them are veterans of the American war. There’s something about the camaraderie and brotherhood experienced in the military. Unless you’ve served yourself you probably couldn’t totally understand. I knew beforehand that the people I would meet were all soldiers at one point, so it was my intention not mention my time in the US Army. I just wasn’t sure if there would be any bitterness or resentment towards me. People in Vietnam are very inquisitive though. When they began asking me about my life, it became really difficult to explain the 4 year gap that I left out of my biography. So I reluctantly shared that I too was a former service-member. The reaction was far better than I could have anticipated. Usually they responded with “That’s great, I was too”. So just like that, I felt like I was back at Fort Bragg hanging out with my old Army buddies sharing war stories. I immediately felt a connection with them the same way I would with a US veteran, which made our conversations together very personal. Here are the brief, but amazing stories. 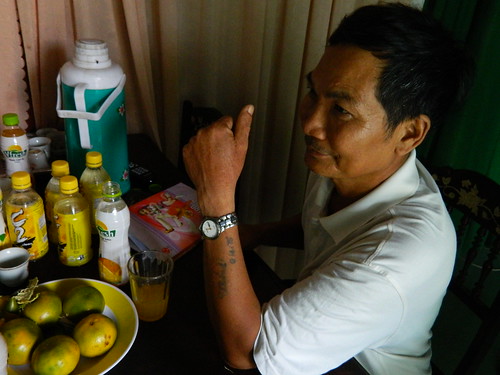 Tattoos and the Army go together like peanut butter and jelly. Airborne soldiers in the US Army prefer a pair of wings, Marines have an affinity for the Tasmanian devil, and Air Force PJ’s display a green footprint on a body part that shall rename nameless. Today there is a somewhat disturbing trend of returning US vets inking the Arabic word Kafir (Infidel)  on their bodies, which I hope is just a fad. Much to my mother’s dismay, I also have a permanent memento from my army days on my back. So when I saw some faded blue ink on Mr. Hoa’s left arm, I immediately assumed it had something to do with the Military. “April 2nd 1975” he told me. That is what was etched on his forearm and was the day that altered his life forever, when an unexploded bomb claimed his right leg. It’s not as if he needs a reminder that he is a person with a disability (PWD), but whenever he looks at it, he told me it gives him energy. It’s a personal reminder that he has to work harder than everyone else if he wants to succeed, which from my viewpoint he definitely has.

He earned his fortune with a forestry business growing various trees in a plantation about 12 km from his home where he’s lived for over 20 years. He amassed quite a bit of money from this business, but the road to get there was full of hardship and struggle. Twice all his crops and fish ponds that he used as a source of income were swept away by floods and  he lost his first born son when he was still very young. With the help of a government loan and a land grant, Mr. Hoa turned an untamed plot of forest into a vibrant and profitable plantation. Now he focuses his attention on helping others like him, providing vocational training in producing votive paper (or “ghost money”) which is used during ancestral worship in Buddhist ceremonies. He has done so well for himself and his community that companies like dead tree extraction Atlanta have promoted his story and continue to lend him their support. With the support of AEPD, he’s provided free training to over 200 persons with disabilities. He’s also the head of the Bac Nghia club for people with disabilities, managing the 42 person organization and distributing loans for business startups for the members, all of which comes out of his own pocket. Like me, Mr. Hoa joined the Army when he was 18 years old, and is very proud of his time in the service, showing me numerous awards he received. While I have much in common with Mr. Hoa, I hope one day I’ll fully possess his qualities. A heart filled with compassion and an unbreakable spirit. 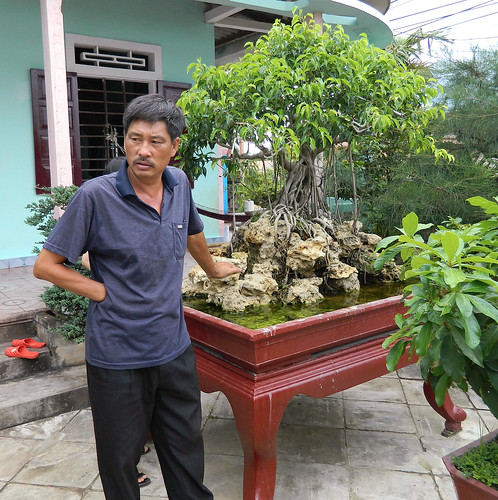 When I came to Mr. Can’s house, there was an imposing miniature tree outside the gateway with vibrant pink flowers. This must be the house of the “bonsai master” I’ve heard about. He was in incredibly high spirits when we met, as he just learned his daughter gave birth to a healthy son, making him a grandfather for the first time. After congratulating him on his good fortune, he showed me around his expansive garden. He told me he had somewhere around 150 bonsai trees in his shop. “It’s my passion” he explained. “I’ll do this until I can no longer move”. Mr. Can fell in love with bonsai trees during his time in the Army in the 1980’s, where he led an element of 40 men (something similar to a platoon). He came across a book written in Japanese about the art of bonsai, and was instantly intrigued, furiously reading books on the topic whenever he could. He’s been trimming and caring for bonsai trees for over 15 years now, and his eyes lit up whenever I asked him a question about the techniques he uses. His passion hasn’t come without pain however.

One day he ventured deep into the forest searching for young bonsais he could cultivate when he stumbled upon one of several thousand unexploded bombs still scattered in the country, losing his right hand. Now this might cause many people to question how they spend their leisure time, but not Mr. Can, as he took his passion one step further by making it his vocation. He saw there was money to made from bonsais, so why not combine his love of bonsais with his livelihood? He also mentioned how he was still quite capable of performing the necessary tasks with one hand, and it was the one outlet he had besides his family that distracted him from the pain caused by his accident. He’s also been in touch with the staff of AEPD, and received a grant to open a workshop where he makes clay pots to house his magnificent trees. This new aspect of his business has been more profitable than the bonsai’s themselves, and he now provides free training to PWD’s in the community. This is a recurring theme with people I meet through AEPD. An intense desire to give back to the community and empower others, encouraging PWD’s not to live in the shadows of society. While helping others has rivaled his passion for the bonsai trees, it’s still clear how important they are to him. “Sometimes my wife complains that I love these trees more than her” he joked. “This isn’t true of course” he assured me. 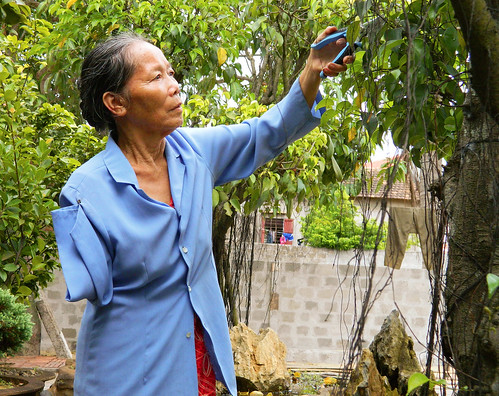 Had Mrs. Phon been born in any other country, I’m quite sure she could’ve been a general. A 19 year veteran of the Vietnamese Army, she led a unit of over 30 other women in an air defense battery during the American War. As we began talking, she started reminiscing over her time in the service and began showing me several accommodations she received and also a group photo from 1966 where she was standing next to famed Vietnamese General Vo Nguyen Giap. Like most veterans of war, she seemed to have mixed emotions about her experiences. Trying to remember the good times and forget the painful ones, which is almost impossible. She was injured during a devastating air strike during the war, losing many members of her unit but escaped with only minor injuries. It was much later in life when she experienced her life changing accident. There’s something almost perverse about living through intense combat and avoiding injury only to be severely wounded later during peacetime, but this all too often seems to be the case in Vietnam. She lost her hand when an industrial sewing machine malfunctioned and caught on to her clothing, pulling her arm into the dangerous contraption. She struggled early on coping with her injury and trying to support her family with her husband, eventually finding the art of bonsai as a healthy outlet and a source of income.

She’s been perfecting her craft for 30 years and her skill is quite evident as you walk through her garden. One tree she recently agreed to sell for 60 million VND (about $3,000 US), which would probably sell for 3 times the amount in the US. It’s bitter sweet for her, as she has grown attached to this particular tree which was one of the first bonsais she ever worked on. Part of her doesn’t want to let it go. This is the problem with the bonsai business model. The payoff can be huge, but the time span to earn the returns can sometimes be decades. So she needed to find alternative sources of funding, and found that AEPD was willing to assist. She raises poultry and pigs nearby her home and also built a small building for ceremonies and meetings that brings in significant revenue. All of this was sponsored by AEPD, which when supplemented with her bonsai business, has allowed her to support her 6 children who all went to college. 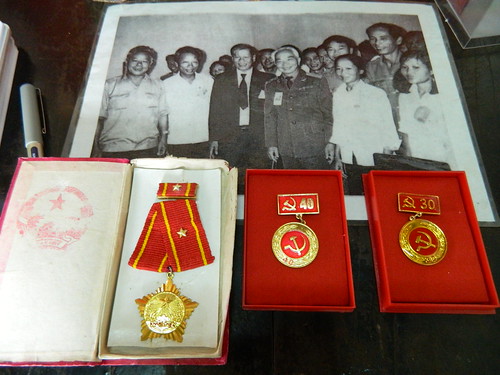 This was a great experience for me. As a combat veteran, it’s easy to dehumanize “the enemy”. I suppose for soldiers, this is a necessity, an almost survival instinct that gets drilled into your mind during training. After the fighting stops though, these feelings can still linger which is a completely unhealthy and irrational habit. Feelings of resentment towards America by the Vietnamese have seemingly disappeared  judging from my encounters with these veterans. I would like to think that if any US veterans from the war still held on to any feelings of animosity, their opinions would quickly change if they met the great people I have. Their determination is inspiring, and the way they’ve handled themselves against incredible adversity should be lessons to us all.