Wadi Nisnas and the Camps of Haifa

It’s midnight and my colleague and I are still at work interviewing Raja Za’atra and Shahin Nassar at a protest camp in Wadi Nisnas, a Palestinian neighborhood in the Israeli town of Haifa.

The camp is set up on a roundabout of the main intersection in Wadi Nisnas. Roaches dart out from the bushes and scurry around our feet, but we are too exhausted to do anything other than flick them away indifferently. 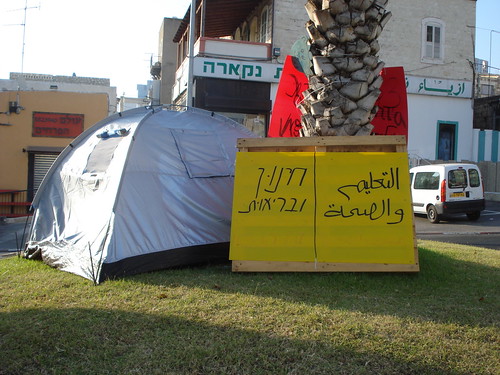 Just a few hours before we sat huddled around our computers in a small internet cafe obsessively updating the breaking news feeds of Israeli newspapers as the details from an attack in Eilat and the subsequent retaliation attack in Gaza unfolded. Now we pile into Shahin’s car and head up the road to the Israeli protest camp where they are conducting a meeting to discuss future plans.

Pizza boxes are in circulation as a crowd of people sit in a circle on the ground, a whispered buzz of conversation reverberates along the fringes of the group. Occasionally someone turns around and shushes the smaller groups congregating. They are discussing the hierarchy of the group and trying to decide how to respond to the Eilat attacks. Groups in Tel Aviv have already decided to suspend their demonstrations and there are concerns that the protests will lose their momentum as fears of further attacks escalate. 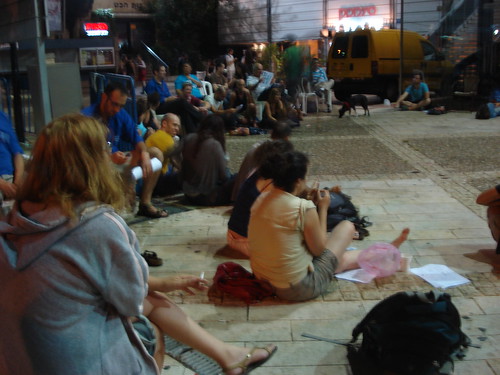 Uri Weltmann, member of the Secretariat of the Central Committee of the Young Communist League of Israel, is staying in the Hadar camp in Haifa. When asked about the decision to suspend the demonstrations he comments, “It’s a bad decision because it creates a wall between conflict and social justice and the two are obviously interconnected. This perpetuates the conflict and [the government]  is using the conflict to put aside all other issues. How can you struggle for social justice when the Israeli/Palestinian conflict takes precedence?”

Earlier in the afternoon we stumbled into the Wadi Nisnas camp to meet Shahin, a journalist and one of the individuals behind the idea of setting up a camp in Haifa’s Palestinian neighborhood. He and his family are Palestinians from 1948 who suddenly found themselves a minority in what had previously been their own country. There are only three Palestinian protest camps among the many Israeli camps currently scattered across the country.Wadi Nisnas is one of them.

“It started out as a joke,” he says with a mischievous smile. “We created a Facebook group and then suddenly people started joining and supporting the idea. We even had to go out and search for tents because we didn’t have them.”

When asked if the community is supportive of the camp he tells us that most of the younger generations are, but some of the older generations don’t see the point of it.

“There are many voices in the Arab community who say ‘This struggle is not ours,’ but we have been struggling for 63 years and what have we got? Nothing. Absolutely nothing. This is an opportunity to address the [Israeli] middle class and let them know about our struggles and our problems…I’m not an Israeli guy, but I live here and everything that happens here affects me. We have been struggling for 63 years. I see it as a great opportunity to raise our voice.”

In Haifa, at least, many of the Israelis involved in the protest camps have been receptive to that voice. At a recent demonstration of 30,000 people Shahin spoke of the need to remember the struggles of the Palestinian people and the effects of occupation. Thousands of Israelis cheered and applauded in response to his comments.

With September rapidly approaching and the protests entering their fifth week, many are worried that the government will use the Eilat attacks to derail the protests and any other discussions of social justice inside (and outside) Israel. Those with a cynical leaning shake their heads at the attacks and mention in a jaded tone that the timing of the attacks couldn’t be better for Netanyahu if he’d planned it. UN agencies are being asked to evacuate Gaza and Hamas is pulling its officials out while vehemently denying any involvement in the attack. We sit uneasily, our eyes toward Gaza, scanning the horizon for any indication of what’s to come. I was here during “Operation Cast Lead” when 1400 Palestinian civilians fell under Israeli fire. Those images still flick through my head at unexpected moments.

It’s 1:00 a.m. and the meeting in Haifa’s Carmel camp is still going strong. We decide to call it a night and head back to the quieter confines of our little roundabout oasis in Wadi Nisnas.

Shahin shakes the hands of a few nearby friends, waving good-bye and telling them he’ll see them tomorrow.

“People here are not the problem,”  he says, “It’s the government, these politicians who play this democracy game.”