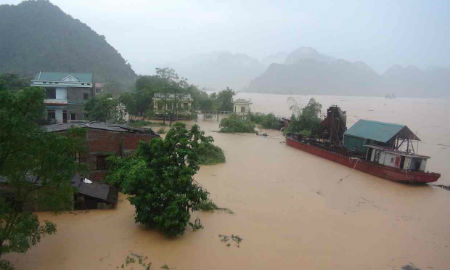 I woke up on Friday morning 10/14 a little disoriented. Preoccupied with the giant mosquito bite that had taken over my right eyelid, I drafted an email to my Director, letting her know I would be working from home that day. I had my headphones in and was lost in thought, busy proofreading a proposal. It took me a good few hours that morning before I opened my windows to find rain pouring from the sky. Dong Hoi City had become a giant swimming pool overnight. Puddles formed everywhere as the river across from my hotel slowly crept closer and closer up to the edge. Rain was coming down at a speed faster and mightier than anything I had seen in awhile.

I sat downstairs at the little café below my room and listened to talks of flooding all over Dong Hoi. You see, we had all expected rain to come, but I certainly had no idea how intense it would get. I could see in the TV how hard emergency services from places like treeserviceremoval.com/ were working to keep the traffic running in a disarray of confusion like that. Over that weekend, the rain relentlessly poured over the Central region of the country, only letting up for a few hours at most. Come Monday, I would’ve braved my first tropical storm in Vietnam, but I was never in any real trouble. I was still fortunate enough to be living in the city, in a better developed part of town. While flooding did happen here, it wasn’t nearly at the level experienced in some of the other communes. Houses where I am are also newer and better built.

When Monday rolled around, I was tasked with translating a document from the People’s Committee of Quang Binh summarizing the damages caused by the storm that weekend. Here are some official numbers of damages:
– Dead: 21 people
– Missing: 01 people
– Injured: 25 persons
– Houses flooded: 92,509 houses
– School flooded: 839 rooms
– Food losses: 4,296.2 tons
Total estimated value of damages: $871 billion VND

When natural disasters like these occur, the hardest hit victims are always seniors, children and persons with disabilities since they are often unable to evacuate themselves or prepare for disasters. On the following Sunday, I joined AEPD on a trip to help with flood relief. We distributed rice and other items such as cooking oil and school supplies to families and children in Quang Thanh Commune. There were five families unable to make it out to the community center, so we drove to visit them individually. At these homes, I am able to get a glimpse into the situation that many persons with disabilities find themselves in during these difficult times. 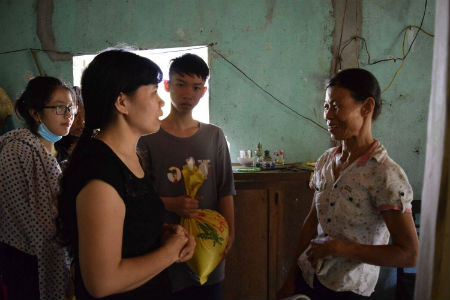 AEPD paid a visit to a family affected by the recent flood.

With this family in the picture, there is an older woman of about sixty years old who cares for her disabled son. Their small home is almost bare besides two beds, a small table set and a TV. She tells us that during the rainy days, the flood rose past her knees. She hadn’t moved certain items around the house to higher ground in time, so they were left floating. Her son is bedridden and relies on her for everything. Their family is one of the ones who are unable to evacuate. They face mobility issues, a lack of transportation and frankly, a lack of areas to evacuate to. When disaster hits, they wait it out and pray for the best. Unfortunately, these situations are not uncommon. In fact, many households in the province experience a similar predicament. One of the sectors that AEPD focuses on in the community is Community-Based Disaster Risk Management (CBDRM). This is one issue incredibly deserving of attention in Quang Binh province, where an average of 2.5 natural disasters happen per year.

We are two weeks out from the storm and Quang Binh is already seeing some more heavy rainfall this week. Certain communes are now flooded once more. In Vietnam, this is a problem known as “lũ kép”. Lũ = flood & kép = dual. I learned this phrase myself yesterday. It perfectly describes the constant and continuous flooding that occurs in Central Vietnam. With one heavy storm instantly followed by another, local people never get the chance to fully recover before disaster would strike their community once again. This is why CBDRM is so important especially in these areas. Please click here to read more about AEPD’s activities in this field.