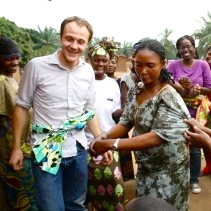 When I think about all of the lessons I have learned in three years in Congo, one comes to mind as the most important of them all: The basics of life are 1) difficult to come by and 2) never to be taken for granted. Across the world, people struggle for water, food, and fuel, but never have I seen a daily struggle for the basics burn as it does in eastern Congo.

Standing by the side of a dirt track my colleagues and I took turns cutting a broken radiator fan out of our truck with a razor blade I meant to use for a much needed shave, I was forced again to think about the difficulties in collecting the basics of what it takes to live in Congo. Surrounded by nothing but forest and hoping the truck would eventually start again, I saw nothing much worth looking at besides the occasional woman passing by, always carrying one of the following loads: 1) a plastic container of water, 2) a bunch of cut wood, or 3) a basket of just-harvested manioc or beans. It would be nice to say that these women went about these daily tasks with a certain joie de vivre in recognition of a job well done, but all I saw was perspiration and grit, and the women’s knowledge that the closest village was a long stretch ahead. “Whistle while you work” did not come to mind in the 90 F weather. I watched as the most fundamental of the building blocks of life-food, water, fuel-were passing en route to their final destination on women’s heads and backs, yet only through sweat and drudgery of the highest degree.

I was traveling to a village called Kikonde, a place I have been numerous times before, where SOS FED has kept a reception center for rape victims going despite constant insecurity and logistical challenges. In Kikonde, the sacrifices Congolese women make to achieve the most basis necessities of life were further emphasized in 40-or-so interviews with SOS FED beneficiaries about the situations that have led them to become victims of sexual violence. As Kikonde is now crawling with former CNDP rebels from Laurent Nkunda’s psychotic pack now on the Congolese government’s payroll, we got a predictable number of women reporting that their rapes occurred during the night when soldiers simply kicked in their doors and took and did what they pleased. This is all too common in the epoch of President Kabila’s Amani Leo Operation. However, what took us a bit by surprise during the interviews was the sheer number of women saying that they were attacked and raped during their efforts to bring fuel, water, and food back to their homes for their families. The stories were shockingly unanimous: A woman was walking by herself to a well, by herself to her fields, or by herself to cut wood for her fires, and was taken by soldiers hiding out in the rural areas where these resources are concentrated throughout Congo. We had heard this in other interviews conducted throughout the years and certainly read it in policy papers, yet for some reason the stories stuck out like a sore thumb this time around.

So, if you are working as SOS FED is to prevent women from being overly vulnerable to rape, where is the key point of intervention? These interviews proved that if we ensure that the basics can be achieved by women without increasing their vulnerability to rape, significant strides would be made in the battle against sexual violence. When we asked what women thought would decrease their vulnerability while getting water, wood, and food the answer was as unanimous as the answers to the previous question. Collective management of these resources and strength in numbers in taking these resources to women’s homes would prevent rape. Women offered us examples of their experiences in collective fields, where roving militia members encountered women working in large groups and realized that a large group has an uncanny ability to identify assailants to local authorities. These would-be-rapists were forced to go elsewhere to find more isolated victims. What if there were no isolated would-be victims left to attack?

Thus, an elementary connection between rape in eastern Congo and isolation while bringing home the basic elements of life was made infinitely clearer by our time in Kikonde. It’s another example of the overwhelming truth that local communities know most about the ways to improve their lives. Far too few people, NGOs, and research tanks take the time to ask. Want to know how to stop the war being waged on Congolese women? Just ask the women who have already fallen victim to it.

Me, SOS FED, and AP are now thinking on how exactly to urge communities to collectively work to get these resources where they are needed without putting women in harm’s way. Surely civilians in an area under control of sordid militias are always potential victims of those who carry the AK-47s, but a collectivity of organized civilians working together at key places of vulnerability, such as in their fields or near isolated sources of water, forms a significant “check” against a soldier looking for a lonely and therefore vulnerable target. This is where we need to be focusing our attention to help reduce women’s vulnerability to rape in Congo.

A Kikonde woman’s embroidered image of her rape, which occurred while she was alone, cultivating her fields in an isolated field. Her story was in sync with many other stories we heard in Kikonde.

A Kikonde woman’s embroidered image of her rape, which occurred while she was alone, cultivating her fields in an isolated field. Her story was in sync with many other stories we heard in Kikonde.