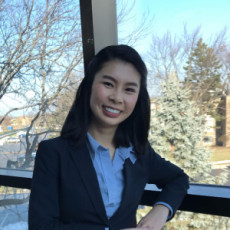 Malien Tingpalpong is a freshman at American University, planning to major in journalism and political science. She is a part of the Mentorship Program DC. As a part of AP, she hopes to cultivate lasting relationships with the team and contribute as much hard work and dedication as possible to helping marginalized communities tell their stories.


What’s In A Name?: Kamala Harris and Non-English Names in America

Kamala Harris, the 2020 Vice-President Elect has made history by being the first African Indian American woman to hold the position. What comes at a tumultuous and scary time in our history, and particularly during my lifetime, is a joyous celebration of what our democracy can accomplish when people’s rights are exercised and counted. When Kamala Harris gave her speech announcing the results, I found myself shedding a tear or two. Never in my wildest dreams could I have imagined seeing an Asian American woman take such an important role in leadership.  For generations to come, seeing someone like Kamala who represents their interests and looks like them will profoundly impact their self-worth and empowerment.

Harris has been in positions of leadership throughout her career, and yet, she repeatedly faces mispronunciations of her name despite being honest about the correct pronunciation. Some other elected officials go as far as to mock her name. Georgia Senator David Perdue said at a Trump rally, “Ka-ma-la or Ka-ma-la, Kamala-mala-mala. I don’t know, whatever.” Perdue made a mockery of her name, insulting the pronunciation and butchering it. Individuals with non-English names often face mispronunciations and mocking remarks of their names no matter what their position is.

Kamala and I share similar experiences when it comes to our names. In my life, I have been called so many names. I’m “honey” with my parents. “Nerd” with my friends. “Smart-ass” and “cynic” from my teachers. “Short” from strangers. And by now, I have been called these things more than my own given name. Sometimes, people do not even say something when mentioning me. I would get a head tilt, a motion of a hand, or a look suggesting, “Hey you over there.”  I get it. My name can be difficult to deconstruct. There are a lot of letters in a confusing order.

I was always apologetic when it came to mispronunciations of my own name; Like I had caused an inconvenience for other people. I wasted their time by existing with this name. When they take an uncomfortable look at the letters and the syllables, I have moments when I wish my name could have been Michelle or Sarah.

There were moments when I wanted to go by something else. One day, I came home from elementary school crying to my mom about how I want to go by Elizabeth. How I was tired of putting up with intolerant bullies. I was tired of being Malien. My mom goes by an Anglicized nickname from her Vietnamese name. Her name is Hong, but in her professional life, she goes by Rosie. Her name, meaning rose in Vietnamese, was given to her by my grandparents An and Khanh. My dad goes by Kit in his professional life.  Kittipon is his real, given name from his Thai parents. Thai surnames are meant to be unique to one family unit. You will never find someone who shares the same name that is not related to you. Thai children are also given nicknames, mainly for assimilation into Western culture. My dad’s nickname is Yo. My uncle’s name is Nittipon, but he goes by Yak. Our family name, Tingpalpong, was given to us after our other family name was changed because of safety. Rebels from our family were in danger after the government revolt, so we changed our name in order to hide.

My parents made the decision to call me by my given name growing up. No nickname. No westernized, watered-down version of my name, even though I desperately wanted something others could pronounce. For a while, I resented the experience and embarrassment and remained apologetic for wasting people’s time.

When I was in high school, I was involved in every part of the school community from the student council to the speech team to being editor in chief of the student newspaper. And yet, no matter how much I put myself out there, teachers, staff, administrators, and some students would repeatedly mispronounce my name. No matter how many times I wrote my name phonetically on my assignments or explicitly corrected them, it did not matter to them. It did not matter the impact I made on the school. What mattered to others was convenience. It was easier to mispronounce my name than to make an effort to correct their words.

Kamala and I are only a few people who have undergone discrimination by having non-English names in the United States. Some decide to make the experience easier for others by anglicizing their names and assimilating to American culture. Despite all the negative past experiences I have had because of others not understanding my name, there is something so special about going by my birth name. I owe it to my ancestors to use this name in the United States. I owe it to those before me who sacrifice their own cultural identity to assimilate. Using a different name would be a disservice to my family, and therefore, mispronouncing my name is disrespecting generations upon generations of hardship and struggle.

In an October 30th, 2020 interview with People magazine, Harris pointed out that, “The name that your parents give you, whoever you are, meaning whatever your gender or race or background or the language your grandmother speaks, is a very special thing. Many cultures have naming ceremonies. It is a gift that is an incredible, familial gift. The family gives the child a name and so I come at it from that: not about myself, but for everyone … Respect the names that people are given and use those names with respect.”

By going by Malien, I refuse to be called anything but my name. And I refuse to sacrifice my identity to convenience others. Instead of feeling the shame and embarrassment, I felt for so long, I take up space unapologetically. So if you have a friend or coworker or classmate with a non-English name, respect them and their name. We need people to say our names correctly. It’s not an excuse to say it wrong. There is something so profound about seeing yourself represented in the media, in politics, and in spaces that underrepresent us. Kamala is paving the way.

“My mother had a saying, ‘Kamala, you may be the first to do many things, but make sure you’re not the last.”