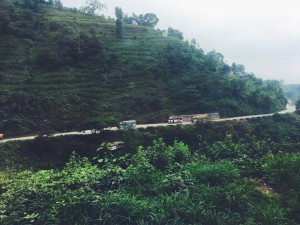 Highway on the way to Bardiya

At this point, the bus was in desperate need of an equipment upgrade and so cut the engine, the fans, and the air  conditioning. We sat, sweltered, and waited. I was most impressed to see mothers and small children waiting out the heat and playing calmly. In the United States, I don’t know if I’ve ever witnessed that kind of patience from kids traveling. I could have just gotten a fan from the list of tower fans online if the AC broke when we were back there. After a period, Prabal leaned forward and asked us, “have you ever spent the night on a bus before?” Vicky  returned his question with another,

“Are you trying to prepare us?” 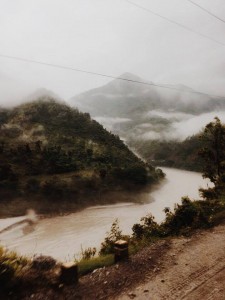 A misty mountain scene from the bus window

Sharing a sense for the ridiculous, Prabal, Vicky, and I burst out laughing at the question. If you were going to be stuck, it was good to know I was with friends who had good senses of humor.

As the time wore on, at least three hours passed, the lack of a fan became more  and more uncomfortable. Occasionally, the bus would move 20 feet forward before abruptly halting again, dangling the hope of forward movement. We relied on a cross breeze through the narrow windows to wait out the heat, not knowing the status of the debris removal, or if we might have to turn back to Kathmandu. Vicky fanned herself with her book, Purple Hibiscus, while I started shedding layers. Eventually, the bus drivers emerged to inform us that in order to continue onwards on a different route that would add 4 hours to the trip and pass through Pokhara, they would be charging each passenger an extra 500 Nepali Rupees (roughly 5 dollars) for the additional gas and air conditioning costs incurred. The bus erupted.

No one was pleased, and negotiations ensued as disgruntled passengers communicated their objections. Meanwhile, the bus stayed put.

It appeared that the bus drivers were trying to sweat us out.

I should note here that in Nepal, on long trips like ours there are a team of bus drivers who share the front compartment. The drivers rotate throughout the trip and the team jumps out when there is debris in the road, and has signals for tapping the sides of the bus when it is in a tight squeeze or moving in reverse. The team helps watch for major pot holes too. To give you a sense for the hazards on the road, and the physicality of this bus ride, my phone’s step counter app recorded 17,000 steps that day. I had been sitting for that entire time period. It was the up-and-down of the bus that convinced my phone it had been a much more active day.

Back to the negotiations: while $5 doesn’t seem like much by American standards (and to be honest, it was hot enough that I was ready to promise my first born child if it would get the bus moving again), 500 Nepali rupee is a very large sum of money. For agricultural workers,  it is the equivalent of almost two weeks wages. I don’t know the circumstances of everyone I was traveling with on the bus, but while I may have been ready to do anything to get the bus going, 500 rupees was an exorbitant amount to ask of everyone. 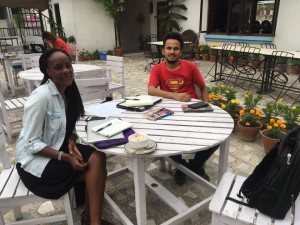 As the sun lowered in the sky, the bus grew quieter, caught in a negotiation deadlock. And then, through the cracked open windows, we heard a beautiful singing begin. Chanting from a Hindu temple nearby lulled the bus riders into a calm, and things seemed to cool down. Listen here:

The bus started once more as we pulled away from the beautiful chorus, and finally stopped in front of a roadside restaurant. It was time for some Dal Bhat.

By the time we returned to the bus, the negotiations had ceased. We would all pay 300 rupee and travel on to reach our friends in Bardiya.